Sometime over the end of March ~ early April my 'Unlimited Fibre Extra' download speed has dropped to about 25Mbps.

This is considerably below the stated Minimum Guaranteed Speed of 59Mbps.

That said the last time I checked at the end of Feb it was only ~40Mbs then, but as their are now 3 adults working from home (including a key worker) it would be good to get the service as contracted.

Can this please be investigated?

Same issue for me for past several weeks.

Likely due to all the extra (fibre) broadband traffic, but my speed has dropped through the floor.

What I’m actually getting is anywhere between 16 and 19 Mbps at any time of day. - <30% below guaranteed minimum.

Typically my speed over the past year or so has been no more than 25.  That figure is very much diminished from when I first signed up for fibre when speeds were 33-36 Mbps!
Looks like the BT system has very low resilience.

Count yourselves lucky at those speeds!!

We should get 18mb
Dropped to 13mb last year due to the old line.

Now getting 8mb
Plusnet have ignored the fault report for a week.
Message 3 of 43
(701 Views)
Reply
0 Thanks
Highlighted

How did you do the speed test?

Was it by accessing the modem statistics and getting the connection speed?

Was it by using a speed test such as ookla?, if so under what conditions was it carried out?,

Responding to dws 1900. Thanks for interest.

I am a Mac and iPad user with no possibility of a wired network connection so always use Wi-Fi. I’ve checked in the past using a borrowed laptop and with either the network cable or Wi-Fi results are identical. I use either BT Wholesale checker or Ofcom checker.
I‘ve not looked at modem stats - not something I know about.

Given the lockdown we are 2 in the house And no tests done when streaming etc.

assuming you are using the PlusnetHub?, login to the device (password unless changed on the back).

Then look at the helpdesk panel.

The parameters of interest are, for example

To access the plusnet hub if you have never done this before, type in

I think you’ll find the issues are with plusnet given the amount of forum posts this week!

Totally ignoring fault reports says it all.
Message 7 of 43
(629 Views)
Reply
0 Thanks
Highlighted

Thats why I have requested the stats, as he is only 500m from the cabinet, but of course that does not accurately reflect the line length.

Initial indicator is the sync/line speed as indicated on the hub: 33.48Mbps downstream & 19.14Mbps upstream.

Looking at the BTWholesale diag test, it gives a 30.98Mbps download result.

This correlates to a test using testmy.net (my normal test source) which gives a download result of 31.79Mbps for today.

When referencing the availability data via the BT Broadband availability checker, it gives the VDSL impacted range (I'm happy to be realistic and work from these figures) as 80Mbps (high) and 61.4Mbps (low), with the downstream hand back threshold as being 55.3Mbps (impacted).

Looking back at my saved results on 'testmy.net' it shows that at the start of my contract for Plusnet "Unlimited Fibre Extra" I was getting 75.5Mbps download in Sept 2019, so what has happened?

I would suggest you carry the procedure defined by plusnet where you plug the supplied filter into the socket behind the faceplate to rule out internal wiring, power down / power up the router and get the stats again from the router (if you are already connected this way, then just do the power cycle)

If there is no significant improvement, then request a GEA test from plusnet and also create a ticket, which will then get them to identify the issue.

Faults chasing requires elimination and patience, difficult I know, but it best to try and rule out the things you have control of first, even more so at the moment.

i discarded Plusnet modem long time ago and use Netgear Nighthawk and BT Whole home wireless discs. Plus Sky have added a wireless router for their tv box as BT/Sky not a good mix.

Lets hope someone from Plusnet is eavesdropping on this customer dissatisfaction

Unfortunately I cannot get the information from your jpeg (magnifying it takes it out of focus), can you try again at a higher definition, or transcribe the information into a text file?

Herewego with a bigger, better 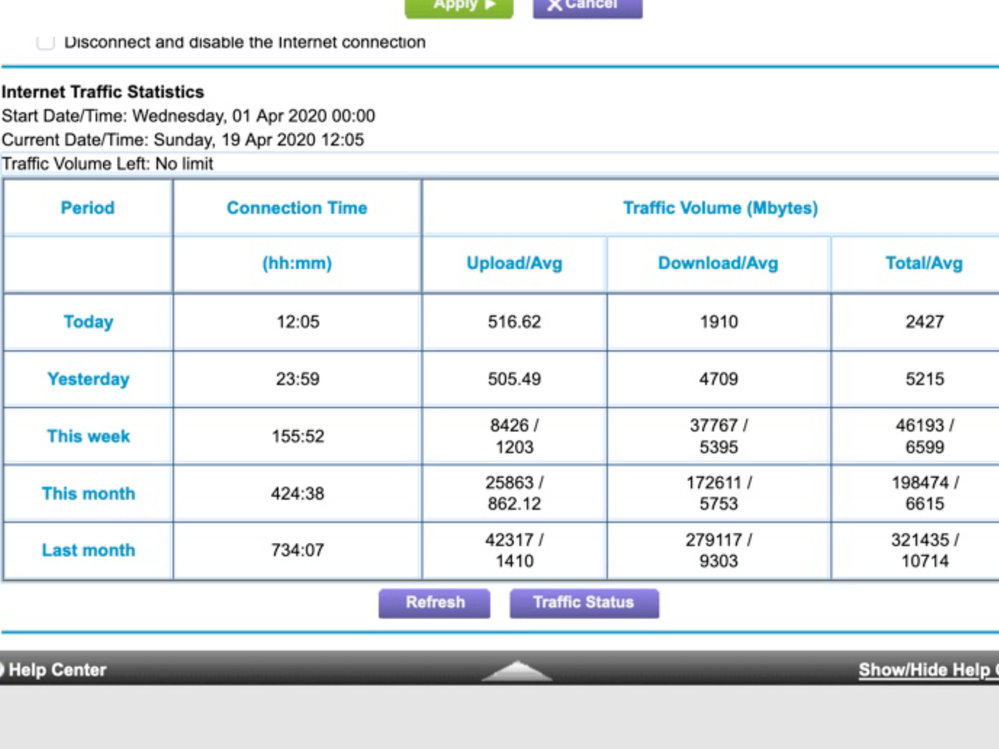 This appears to be the quantity of traffic you have passed. What is required is the connection speed, usually expressed in Mb/s.

The connection speed (or sync speed) is the speed between the modem and the cabinet, which should be higher than the Minimum Guaranteed Speed.

For example performing the test while downloading a film will reduce the speed test result, but not the connection speed.

If you can find the connection speed, there will be two, upload and download, and the download speed should be higher than the Minimum Guaranteed Speed. If it is then plusnet will not deem it an issue.