I was hoping for a bit of advice on the above as don't seam to be getting anywhere quickly with the normal support channels and have seen examples of quick resolutions on forum posts.

In summary, after 18 months of flawless service my speeds have dropped from 38/7.6 to 32/<1 after waiting a few weeks for the fault to be looked at by the faults team an engineer visit was arranged.

Initially all was going well then the engineer went to check the cab returned and told me there was nothing wrong, I was expecting to much and would never get upload speeds of over 2.

Tried to discuss the case explaining that have had the service previously and it suddenly dropped but he was having non of it.

As per the attached extract from the wholesale checker bare minimum should be 3.7 so it's still well below.

It's causing me quite a lot of trouble as I have poor mobile signal so use VoIP / WiFi calling which is currently unusable.

Hoping someone can shed some light.

I can see that we've been looking into this as a fault for you and that an engineer visited this morning.

Unfortunately it does look like the level of upstream you're seeing is the best that the line can currently support. This does mean that sometimes you may see better speeds on the upside but I'm sorry if this disappoints.

Thanks for looking into this for me.

I can't understand what could of changed for such a significant drop though? The line was previously supporting 7+ and that would be a stable speed test, it's hitting around 1 but bounces around on the speed test.

@adamwalker So you are saying that a drop in upstream speed from the clean maximum to less than a third of the impacted minimum is acceptable? It would more than disappoint me, have you got no explanation for this sudden drop. The final sentence of your response makes no sense to me.

@jonathana13 What fibre service are you on? I ask because the standard fibre has maximum upload of 2Mbps, however you claim to have had 7.6Mbps upload previously so you must be on the 80/20 fibre extra product.Could your product type have been unexpectedly changed?  It may help if you post the stats (sync speeds, attenuation etc ) from your router, sorry I cant give more detail on how to do it as I don't use a PlusNet router. It is annoying that the BT engineer just says that's the best you can get and wouldn't accept you had a better speed.

@RealAleMadrid Thanks for your input, I am currently on 80/20 and have been since the service was installed. Have asked this question as this was my first thought and the support team advised on a number of occasions that the product hadn't changed and all of the settings were correctly configured.

It was very frustrating, he implied that the line length was the issue and I couldn't get through that the house hasn't moved!

Re stats not sure if I can get these, have the open reach modem which I don't think I can access?

OK, you can't get the stats from the Openreach modem, you could ask PlusNet to do a GEA test which will show the line speeds.

Thanks, I think the below shows the info, it was in the support ticket. 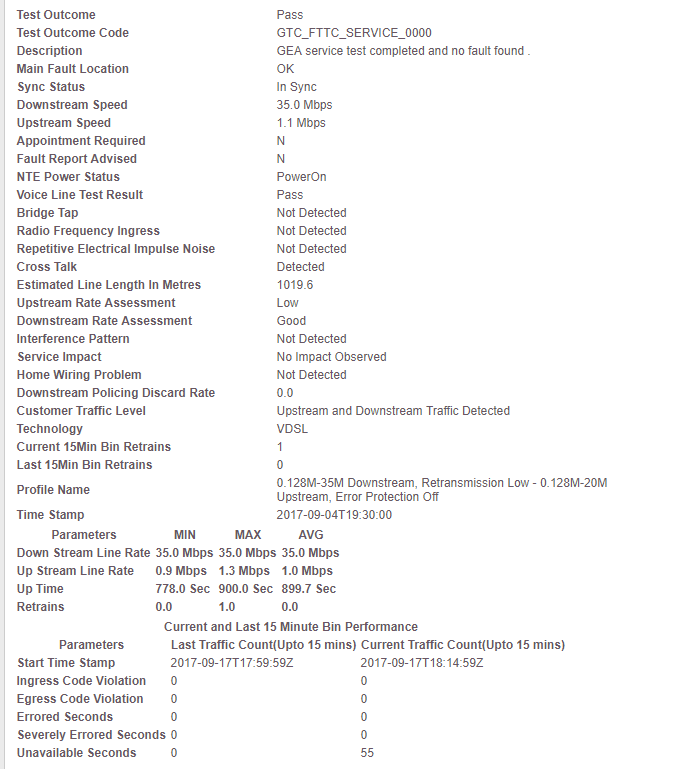