Have been with Plusnet since the beginning of the year on the fire unlimited package. Previous to this I had been with BT for my phone line and internet for 5 years without any line or wifi issues.

Since moving over to plusnet:

Wifi connection throughout the house is intermittent, despite having separated the 5g channel
Wifi speeds across the entire house when working is abysmal, never had any issues with previous routers
The Line goes offline/down at least twice a day, normally during working hours
Line speed from a PC plugged in to the LAN shows a great down/up speeds, however the wifi, even sat next to the router on a mobile device/tablet is rubbish.

I'm considering just binning plusnet off and going back to BT. It certainly seems like the router cannot handle 10+ devices using the wifi, even during day when a majority of them a turned off/locked and I'm working from home my video and voice calls will drop out. Even worse when sharing a screen. 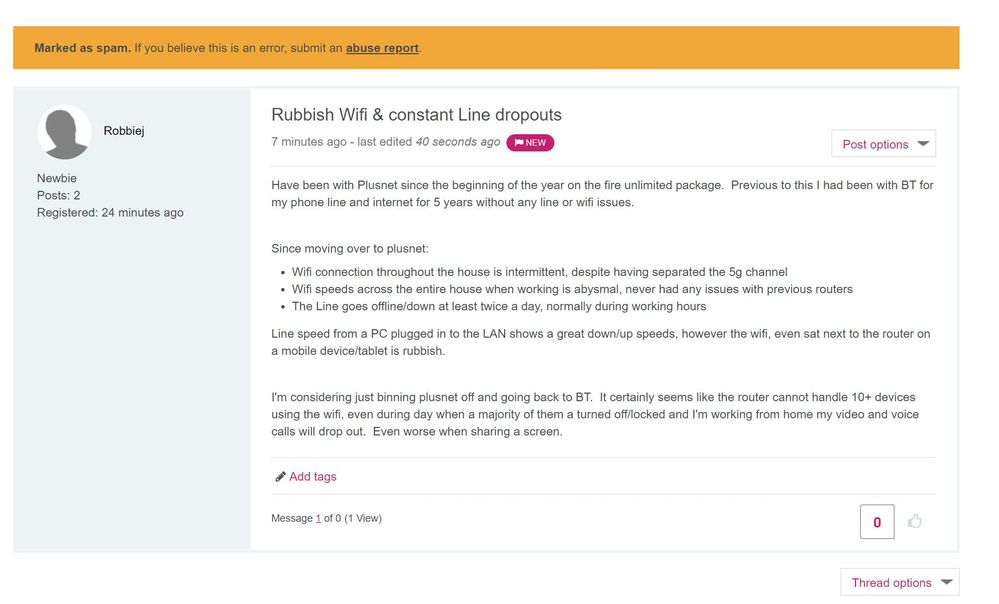 Wifi logs are full of the following:


This topic has been released from the spam filter and others merged in.

I'm considering just binning plusnet off and going back to BT. It certainly seems like the router cannot handle 10+ devices using the wifi,

Just go back to using your BT router. All you need to do is change the PPPoE username and password to your plusnet ones.

@Robbiej
The details of how to set up the BT routers for use on Plusnet are at: https://community.plus.net/t5/My-Router/Using-A-BT-Smarthub-An-Update/td-p/1795292
Regards
Richard
Message 7 of 8
(475 Views)
2 Thanks
1 user liked/thanked this post: MisterW.

Alternatively, if you no longer have your BT router, go here:

read the first post, go to the last few pages to see the current state of play, and then ask Bob Pullen to push the latest firmware to your Hub One.