Plusnet said 'Your download speed range is 40 to 55 megabits per second, with a minimum guaranteed speed of 35mbps.'

Monitoring the line speed over 11 months and 3 engineer visits, the max speed attained has been 36.01mbps. The speed regularly hovers around 23mbps and spikes at 28mbps on a wired connection. Losing about 5mbps from external to internal connection.

Apparently this is acceptable even though it is below the minimum guaranteed speed.

Quite frankly I've had enough of the shambolic speeds I've been receiving, each engineer states you won't get any better because the 100 pair cables are rubbish and need replacing, yet won't be replaced as it costs too much.

Add on to this farce that plusnet billing is a joke and bills are constantly cocked up, I'm running round in circles.

I'm paying for a service that is clearly not attainable but is apparently acceptable.

I don't want another engineer visit as it is a complete waste of time, it would be nice to see what can be done with regards to the cost I'm bearing for not attaining the service I'm paying for.

Thankfully I only have 6 months left of this contract.

If you are not getting the guaranteed speed and it can't be improved then i believe that you can leave without penalties. However, unless you also have a cable or FTTP provider where will you go? You will probably find that all other providers will use the same poor performance infrastructure.

If you are paying for fibre extra then get Plusnet to downgrade you if they can't provide this speed. Of course you could still be on the legacy up to 55/10 service .

Yes, that is the problem, all providers using the same infrastructure!

Yes, I will look at Plusnet downgrading my package.

Thanks for your help.

@alandfisher  If you put your number in the DSL Checker, you will at least find out what your line should be getting - it will also show your sync speed. 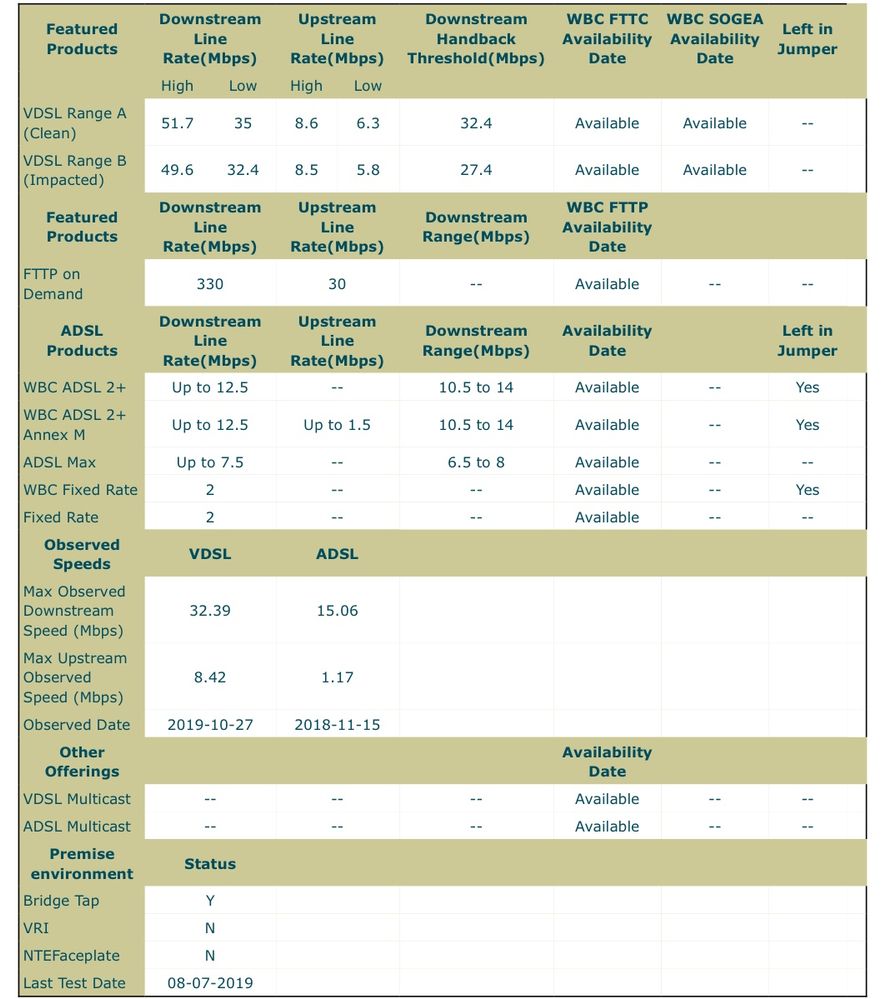 Some interesting things shown on the DSL Check page.

when you were on ADSL you were getting better than the estimates which would suggest there is not so much wrong with the cables.

On VDSL you are below the estimates, and PN should be pushing Openreach for a fix.

Also a Bridge Tap is showing, which can be a sign that your internal wiring is slowing things down.

Do you have a filtered Master Socket?

If so, do you see a difference in sync speeds if you use a dangly dilter in the test socket?

Hopefully a PN staff member will pick up this thread and dig a bit deeper with what is going on.

Thanks for getting in touch @alandfisher

I'm sorry to see you're experiencing poor speeds. I've been looking into this and unfortunately to investigate further we're going to need to arrange another engineer visit however I'd be happy to escalate this with our suppliers requesting the engineer to carry out a thorough investigation and steps put in place to resolve this for you moving forward.

Due to the length of time it has been since we've arranged the last engineer, the fault is closed now so we'll need to raise a new fault first. Can you report a fault to us Here dropping us a reply back once you've done so?

Either way I'd recommend calling our customer options team on 0800 013 2632 to downgrade to basic fibre as there's not really much point you being on fibre extra when your download speeds are below 40mbps and upload speed below 10mbps.

With regards to your account billing, from what I can see this should be resolved now and your next bill should be accurate. I do apologise for the issues you've had with us previously though.

Finally, if you're interested here's a copy of our testing fresh from the printer just now:

As I stated in my original post, after 3 engineer visits, the last one culminating in being told by said engineer ‘you won't get any better because the 100 pair cables are rubbish and need replacing, yet won't be replaced as it costs too much and there are other priorities.’

So quite frankly, another engineer visit is a complete waste of my time and BTopenreach engineers time. 3 attempts to resolve the issue and nothing will be done is the standard answer. Yet Plusnet are quite happy to keep charging me for a service that cannot be attained, despite reports apparently being sent by engineers.

Having already had a goodwill payment of one free month service from plusnet due to constant poor service, I find it quite annoying that considering my 3 prior speed complaints the suggestion of downgrading hasn’t been suggested by plusnet before therefore clearly not ‘doing me proud’.

The steps to resolve this issue moving forward should be downgrading to basic fibre, acknowledging that the service has been poor and doing something with regards to the billing of service to a respectable price for said service.

I'm seriously looking at transferring to another supplier at a basic fibre package..they can’t be any worse than the service provided so far. I’ve had enough chasing around in circles

It’s quite interesting that a community veteran suggests things such as a ‘bridge tap showing’ yet plusnet results say no bridge tap.

Thanks for getting back to us @alandfisher

From what I can see I've provided you with two options; for us to continue investigating your speed fault escalating this with Openreach or to downgrade to our basic fibre package.

We generally don't provide refunds for speed faults because there has been no loss of service however I'm sure we can offer a fair and proportionate goodwill gesture once this is resolved one way or another.

With regards to our test results not showing a bridge tap, I've simply copied and pasted them here from the BT system we use when testing a line. If we were to investigate that it would be another engineer as there's nothing we'd be able to do about a physical fault with your service remotely I'm afraid.

In answer to your questions:

Yes I have a newly installed (11 months ago) Master Socket 5C.

i know there is a drop of about 5mbps between the external cable joining the house and the master socket.

The master socket is the only socket now used in the house and I have no dangly filters to use. The first engineer said I had no need for them anymore as that was a filtered master socket and the only one used.

Interestingly, the first engineer cocked up when he came here to solve the problem. He crossed lines between me and a next door but one neighbour in the street cabinet...he left me with 49mbps download speed..unfortunately she got my phone line and I got someone else’s. When the crossover was corrected by another engineer I was back down in the 20’s for download.

thanks for your responses with regards to this problem.

I’ll contact the customer options team to downgrade to basic fibre for the final 6 months of my contract.

Thanks for getting back to us @alandfisher

No problem, let us know how it goes and if there's anything else you'd need help with.

Hi @alandfisher   I am not so keen on the new 5C master sockets, but it sounds that you have two issues.

If a new master socket were fitted would that mean you kept the extra 5Mbps?

The fact you got 49Mbps on another line suggests that it may be a faulty port in the cabinet or a faulty line between the cabinet and the exchange - either way if you ever manage to get a competent Openreach engineer your issues should be able to be fixed.

The GEA table @Gandalf  produced also showed the line was Banded - speed restricted - however they are usually a couple of weeks out of date, which may also explain why it did not show the Bridge Tap that the DSL Checker did.

In the interest of being thorough, we've checked a backend system which shows a more up to date banding and this is showing the line to be artificially restricted to a speed of 32.4mbps. This won't actually be affecting the physical sync speed though as that's at 31mbps below the banding, so there's 1.4mbps of room for the line to sync at a higher speed.

I'd personally like to see us arrange another engineer for a second opinion with in mind that we'd be escalating this.