After being a customer for years I can say I have received the poorest service ever. I changed over to fibre broadband at end of January and I have had no Internet since. I have lost count of the amount of times I have phoned. Had engineers come out twice. Been told they would call me back and received no call. Not been able to work from home due to needing internet. Nearly 3 weeks on and I still have no answer as to why we have no internet and no clue when the issue will be resolved. Told customer service I was thinking of leaving and she said ok. Does anyone know what they are doing at this company? I can't bare to phone again and wait 30 minutes for the call to be answered then spend an hour on the phone to be told they will call me back with no return call!
Message 1 of 14
(1,796 Views)
0 Thanks
13 REPLIES 13
Highlighted

After making yet another call yesterday to plusnet to be told again the technical team will contact me within a few hours. I'm still waiting! Has anybody else having issues with the finer broadband and receiving no help. Unsure on how to proceed with this.
Message 2 of 14
(1,736 Views)
0 Thanks
Highlighted

I received a call after posting on here to be told I needed another engineer, this would be the third one would be attending my property on 21/01/217 (3 days time)  I booked time off work and no engineer came.  Made another call to plusnet took over 30 minutes to get through to be told again someone will call me back, guess what? nobody called back!

I worked late on Wednesday 22nd, phoned plusnet at 9pm waited on the phone till 10:20pm and put it down in the end.  Thursday phoned again spoke to e very polite member of staff who tried his best to help, did yet more test was on the phone a long time.  I was told to turn my internet off till the morning whilst they conducted more test and they would call me back in the morning.  After waiting AGAIN I phoned back today after lunch had to explain again what the issues are, I was informed I would have to wait 5 days for the problem to be looked in to.  By now I was very frustrated and asked to talk to a mannager, well I asked on a number of occasions.  I finally got to talk to a manager who was very patronising, yes I was frustrated and being a bit off hand but surely he could of understood my frustration.  He informed me the memeber of staff I spoke to last night gave me all the wrong information and the best thing I could do was get off the phone because I was hindering them solving the problem being on the line and I will be contacted when the issue is resolved.  He could not tell me when I would be contacted back.

So where I stand now, I am currently waiting for someone again to call me back and still have no internet!

Plusnet your are providing an appalling service and to manager I spoke to, you was as useful as a chocolate fireguard!

And so it continues!   I received a call from PlusNet and may I add the staff member was very polite.  Ask me to perform test I feel like I've done a million times before.  It resulted in him saying an engineer need to come to the property again! I will receive another call within 3-5 days to arrange the appointment.  After not having any internet since the end of January I decided to cancel the service as I was not willing to wait another 5 days and take another day off work.  I was informed if I wanted to cancel it I would have to pay £334!!!! Can you even believe it, I HATE PLUSNET!   SO NOW I HAVE TO WAIT AGAIN WITH NO INTERNET.  THIS IS PREVENTING ME DOING MY JOB!!!!

Well still have no internet! After receiving a text asking me to book yet another engineer appointment, it was arranged for 28/02 and I had to get my pensioner mother to come to my home now I have no annual leave left! She sat at my home for 6 hours. I contact plusnet again, took so long to get through! To be told the engineer had been but he fixed the problem and did not need to come in to my property, explained he didn't even let us know he had completed the job and that the internet was still not working. I was put on hold for a long time then told there was nothing he could do and someone would contact me tomorrow. Guess what received no call on the 01/03, I called back it took an horrendous amount of time to get through. Told I would be contacted within 5 days. By now I am sick to the back teeth of this pathetic service, informed the worker I was not willing to wait another 5 days, got put on hold then told I would be contacted the following day. I'm still waiting with no internet. Do any of you have any clue what you are doing!!!!! Think I need to give trading standards a call, sure I should not have to pay over £300 to get out of this horrendous contract!
Message 5 of 14
(1,612 Views)
2 Thanks
2 users liked/thanked this post: SpendLessTime, MauriceC.
Highlighted

Still no phone call from plusnet and they had the cheek to take the bill money from my account. Very upsetting. Feel let down!
Message 6 of 14
(1,576 Views)
0 Thanks
Highlighted

Well waited a week and still no contact from planet. I called them today spent another 45 minutes on the phone. Another engineer arranged to come on the 16th, why is it that could be arranged today but when I phone 9 days ago I had to wait 5 days for the appointment to be made, well it was never chased up and it took me contacting planet again today! I asked how I go about making a complaint got told I couldn't make a complaint because they don't have a Complaints department and they deal with complaints when customers call with issues. How has my issue been dealt with? 6 weeks and still no internet!
Message 8 of 14
(1,532 Views)
0 Thanks
Highlighted

And please do use it as that sort of customer service deserves to be subject to a complaint. The phone operator needs to be talked to, at the very least.

I'm very sorry for the lack of response here. Looking over the fault I can't see that this has been handled in the best manner. I'm asking one of my colleagues to take a look over this and see if anything else can be done prior to the next engineer visit.

This issue has now been resolved. The problem was our internet was linked up to different property.

Hoping will be reimbursed for the time we didn't have a service and given some sort of compensation, due to paying for other internet services which we could not access, days off work, the hours spent on the phone, the ew extra internet data spent on mobile phones and the stress we endured during this time time due to not able to work at home and my son unable to complete his college home work.

Seems like we've had similar problems and terrible service from Plusnet. I lost my broadband connection 5 weeks ago. After phoning plusnet they told me the line had been "slammed" by sky. Two cancelled reconnection dates (by them at little or no notice) and several chases later they finally promised connection last thursday. I got a text to say it was up and running at 7.00am- when I got home in the evening nothing had changed. Another 20 minute plus hanging on the phone friday finally got me through and although Plusnet said the line was ok I unplugged the modem & router and it was still saying OK! Finally got them to sent an openreach engineer Saturday. He sorted the problem- turns out as part of the reconnection they've given me a new line- along with a new phone number- nobody bothered to tell me and my old phone number is still up and running. Better still the engineer showed me his job ticket- my name and contact number -OK, but the address was my next door neighbour- who isn't with Plusnet!

Like you I'm now waiting for a response for reimbursment- 5 weeks broadband- £10 phone bill talking to them and confirmation I'm not paying for 2 phone lines!

Seems to me interdepartmental communication within plusnet is shambolic at best when they can't even get the basic details right.

After the issue being resolved i have received no compensation for all my disruptions and they have taken another full bill payment from my account. So annoyed! I will not ever recommend plusnet to anyone.
Message 13 of 14
(1,363 Views)
0 Thanks
Highlighted

This is a more recent test: 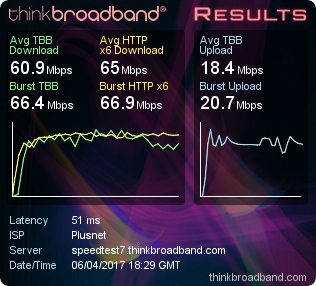