I am trying to setup ddns on my router and one of those requirements is to have an open port 80 try everything my end, that when I login into my Plusnet connection setting. that when I noticed that my firewall was on high.

when I tried to lower the firewall I got this message 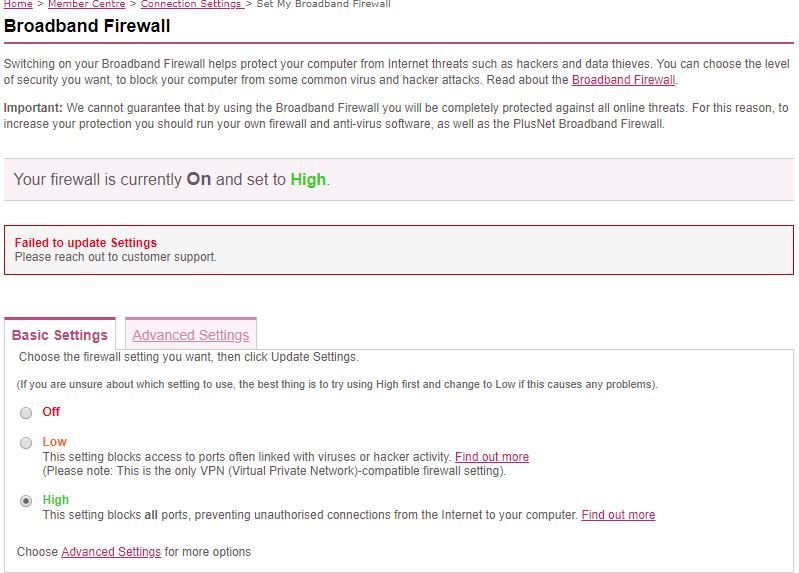 Then after the first time, I tried to change my firewall setting the firewall options has gone from my connection settings. 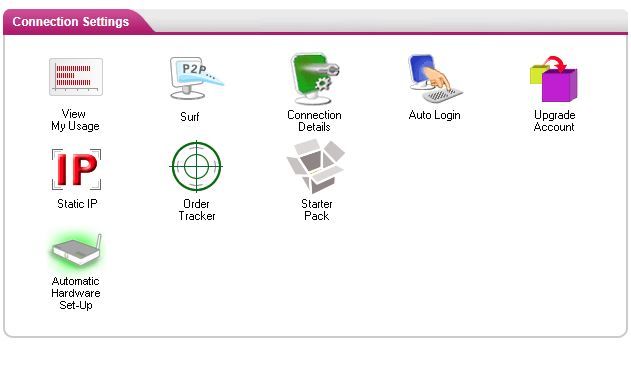 after this a Made two call one advised me that he had lowered the firewall yet his ticket seems to say something different to the conviction we had on his ticket it said that he told me that Plusnet doesn't support it and for me to look on the advance setting of my router, although I had told him I already had forwarded my ports.

Anyway, that night I checked the ticket and realized that he has just fobbed me off.

I called back that night to be told that the, in fact, was an issue with the Plusnet firewall & they had been working on a fix.

On a chat the next night I was told that a fix was being rolled out on Monday 21st. Monday's here and still no fix still without being able to forward port I am unable to use ddns, Alexa to sync to my router, I am not able to open port to play pc games with friends

P.S I did try to chat with someone tonight I was in chat queue for about 40 minutes when it told me the was no one to talk to and to try again.

Welcome to the forums.

The direct link to the Plusnet Firewall  is https://portal.plus.net/my.html?action=firewall (login required)

Still getting same issues, It will not allow me to turn off or lower the firewall setting. 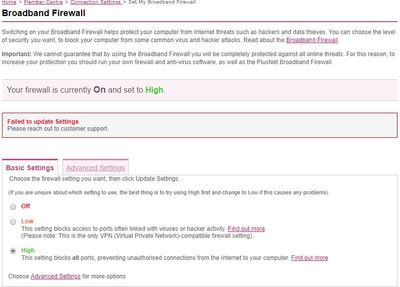 Looks like it needs some input from the Plusnet staff if you cannot click on the Off button.

@Gandalf can you help?

I've raised a ticket. It's a known issues that a few customers are having same issue.
Hoping they will fix it soon.

It looks like we can't change your firewall settings from this side either as we're getting a similar message.

I can see this has been raised to our incident management team (IMT-1973) to further investigate.

Apologies for the inconvenience caused.

I am still yet to get a resolution to this issue. I just checked again see if I am able to lower or disable the Plusnet firewall still the same.

@Gandalf  9 days without an update?

We've found the cause of the issue and a change is being written to fix this.

Just a update this should now be sorted.

Can you try again?