hi there been having issues with packet loss for ages now, pingplotter is showing it clearly. i've attached a screen shot. is there anything that will solve this as it seems to have been a constant on your network for us. 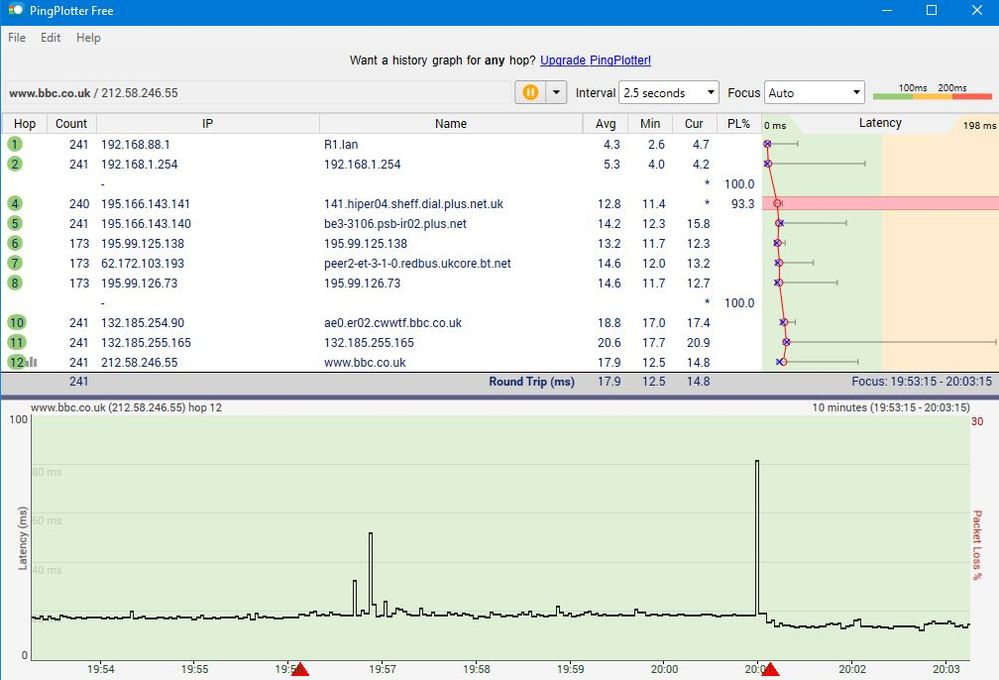 split post into its own thread for better visibility and changed the topic title.
Customer / Moderator
If it helped click the thumb
If it fixed it click 'This fixed my problem'
Message 2 of 7
(891 Views)
0 Thanks
Highlighted

hi there thanks, any word on this as web browsing and gaming etc are often quite erratic.

I monitored it for quite a long time yesterday and it regularly sat between 70% to just over 90% packet loss on that 141.hiper04.sheff.dial.plus.net.uk server of yours.

My colleague @Chris sent you this about 30 minutes ago but it seems to have been missed in the Moderator split.

I'm not sure if I'm missing something here but that image isn't showing packet loss? Hops along the route are largely irrelevant as all the packets are getting to the destination with 0 packet loss showing there. The bottom half of your image is also not showing any packet loss coming down from the graph. Pings of 17ms are absolutely nothing to be concerned about.

so to clarify, the 93.3% packet loss at that server in Sheffield will be having no effect on stability or performance???

It shows that at hop number 4 where the route reaches you, we're running a packet loss of 93.3% which is almost total packet loss, it's in the top right corner of the screenshot. so that will not have an effect on performance?

so that will not have an effect on performance?

What matters is that the plusnet hiper04 router, routes the data onwards to the destination rather than respond itself to ping plotter.

The fact that the subsequent addresses and the destination address have no packet loss indicate that the plusnet device is behaving correctly.

That server will be prioritising the routing of traffic rather than responding to ping packets, which is why it's showing as packet loss there. As long as the final hop gets through and isn't showing packet loss, there isn't anything to be concerned about.

Former Plusnet Staff member. Posts after 31st Jan 2020 are not on behalf of Plusnet.
Message 7 of 7
(820 Views)
3 Thanks
2 users liked/thanked this post: MauriceC, liane14.
Topic Options