I've been on Plusnet Unlimited Fibre Extra for nearly two years now.
I've always used my own FRITZ!Box 7490 without any problems, until earlier this year.

At the end of April my connection suddenly disappears and won't come back. When checking the router settings it seems it's not able to sync.
After running various tests (plug it directly into the master socket, try a second router, check that phone line works - which it does) I raise a ticket with Plusnet (ticket number 189591694).
Their tests confirm no issues with the exchange or the line, so they suggest it might be a fault in the home environment and book an Openreach engineer to come and have a look.

At this point my broadband has been down for over 5 days, but when the Openreach engineer turns up on the day of the appointment the router to my amazement has stopped flashing (i.e. it's managed to reconnect).
I explain to the engineer what happened and he tells me that he has done a "profile reset" before setting of to my house and that is something they tend to always do when heading out.
He then goes and does tests on the socket and the line. He confirms the wires are absolutely fine. Since the master socket was a slightly older model, replaces it with the latest 5C model (which has separate sockets for broadband and phone). After installing that and after running a sync test with his diagnostic equipment everything seems fine.
We plug the router back in and I can confirm that the connection is working again.
His explanation is that the profile reset might have kickstarted the connection back into live, so we leave it at that.

Then my connection is fine again for a long period, although there are the occasional dropouts (maybe once a month or so), but in those cases it seems to reconnect again quickly.
Until last week...

On Wednesday afternoon the connection drops again and the same issue of the router not being able to sync has reappeared again. After giving it some time to see if it recovers, I start running the usual tests (reboot router a few times, check phone line, try master socket directly and try second modem) with no result.
So I log another fault with Plusnet (ticket number 192013820) who run their tests and tell me once again the fault looks to be within the home environment.
Another Openreach engineer appointment is booked and he turns up last Monday morning. As soon as I see his van pull up I check the router and, lo and behold, the lights have stopped flashing and the router has reconnected.
The engineer confirms he has done a profile reset. He runs a wire test and a sync test and both come back without any issues.
Since the router now reconnects everything is fine and we consider it all dealt with.

Until yesterday afternoon...
The connection had been working fine since Monday, but around 15:30 it drops again. Same issue of not being able to sync.
I've run my usual tests again, but before I log another fault with Plusnet I would like to hear some advice on what might be going on. Clearly the line seems fine and whatever "profile reset" the Openreach engineers do seems to bring back the connection, but it seems a waste of time to wait for an appointment and let them do that.

Has anyone had similar issues before or have any ideas on what could be causing this?

The settings of the router itself haven't changed since I first set it up (and it was working fine for the first 18 months):
PPPoE, VLAN ID 101.

My guess would be that you are on a Huawei cab and your Friztbox does not play nicely with G.INP.

A line reset would remove G.INP and apply moderate interleaving instead. Hence the reconnection.

There is a thread about the 7490 and its G.INP problems when G.INP was first introduced:

However, I would have expected that the problem would have been rectified by 2019....

Hi @tomve, welcome to the forum.

I have looked at last engineer note and I cannot see a mention of a 'profile reset'.

My tests still shows as out of sync with a 'Modem is out of sync and fault is most likely to be in the home environment'. I understand that you've already tried another router but would you be able to set up the Zyxel router please so we can retest it from our side?

@RichardB  Yes, I did read through that topic earlier as I thought it might provide some answers.

I'm pretty sure I'm on a Huawei cab (I've noticed it mentions Broadcom when the router does manage to sync and connect in the past, which seems to be the chipset that is used there?).

But since it's not syncing at the moment, I can't see the line stats and whether this G.INP option has been enabled or not.

I see Simon Craddock reported that he had to increase the SNR to 8dB for 7490 to retain a connection with G.INP active:

Can you try the same?

@Beyhive I've now swapped the routers around and the Zyxel is now plugged in. I can't see it syncing from my end, but go ahead with the retest.

@RichardB I did try changing those settings as well and that didn't make a difference. But then I don't know if that would only work after it manages to sync?

I assume it alters the target SNR margin, so would have an effect in negotiating the synch with DSLAM.

It would increase the margin at the expense of some synch speed.#

However, if the Zyxel router also does not synch then you would have to have two routers which have issues with G.INP or G.INP is red herring and something else is causing the problem

Thanks for getting back to us @tomve.

We've re-tested and are still detecting the issue that my colleague @Beyhive had detected.

As you're still out of sync, I've just rejected Openreach's report that the issue is resolved and we now await their update. In my experience, it's likely that this will progress to another engineer visit but we'll update you directly should this be the case.

@OskarPapa Thanks for letting me know. I'll keep an eye out for any updates.

The other likely candidate is the line card in the DSLAM becoming a bit 'iffy'.

Perhaps on the next visit the BT engineer forgoes the early line reset and checks the output at the local cab as the first step?

If it's OK at the cab then it's probably the Fritz box; If it fails at the cab and a remote line reset corrects it then ...... investigate further in the chain.

This afternoon I took the Zyxel off after the latest tests had been completed and put the FRITZ!Box back on.
And about 10 minutes ago it managed to sync and reconnect again (about 5 and half hours after I turned it back on).

I don't know whether that is due to Plusnet or Openreach doing anything on their end, or just a case of it magically started working again...

But now it's connected the router settings have given me a few interesting things though:

Here are the current DSL stats: 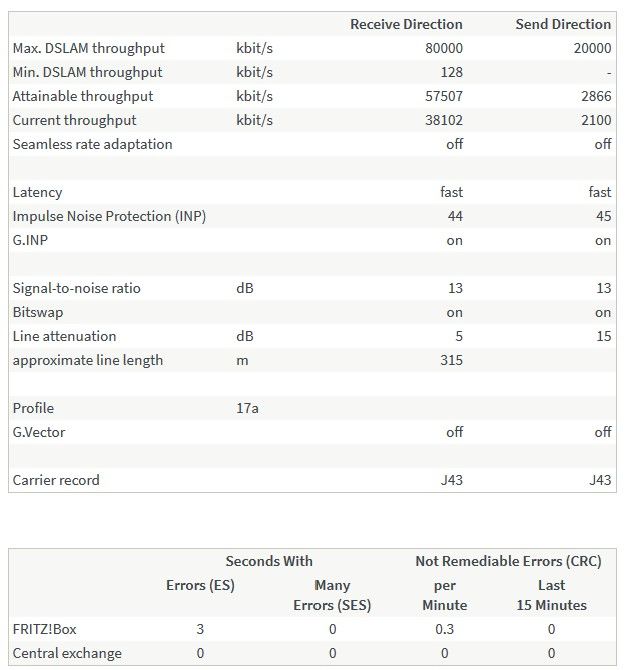 Maybe someone with more knowledge can spot anything out of the ordinary in there?

Hi @tomve, the speeds are certainly lower than I'd expect them to be for your line, despite the previous engineer notes advising that is was passing the tests for sync speed when they were there investigating.

Unfortunately it looks like you may have closed the previous fault report ticket. I'd recommend re-reporting this over at https://faults.plus.net so we can continue to investigate this further with our suppliers for you.

It now looks like everything has gone back to normal overnight: 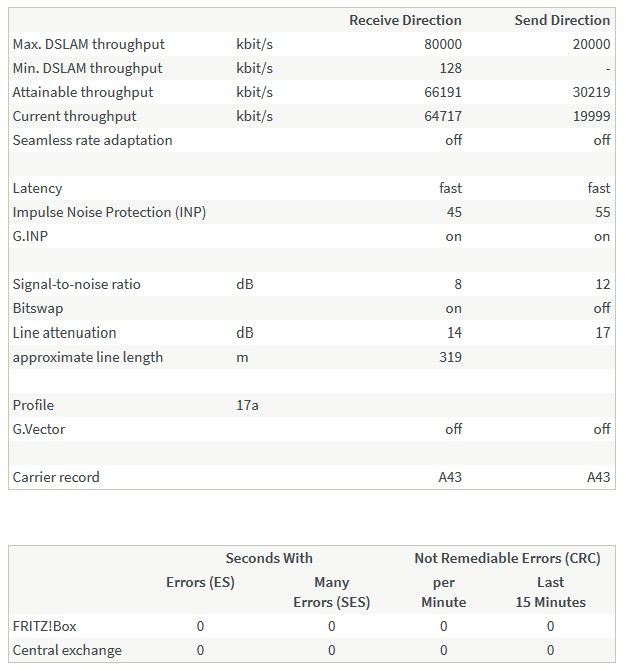 64Mbit/s down and 20Mbit/s up are the kind of speeds I was getting before.
And it looks like the number of errors reported has also gone down.

It did lose sync twice between last night and now, but it seems to have reconnected again immediately after.

So for now I won't reopen a fault report ticket and I'll monitor the connection over the next few days to see if it stays stable.

Let us know if you notice any further problems or you need help with anything else.