I got NTE5C fitted last year see photo below as my FTTC stay at 79999k / 19999k and still ongoing connection stable for 9 weeks (because I got new router called Zyxel XMG3927-B50A as these are G.fast future proof) as I don't think NTE5C socket are to blame? 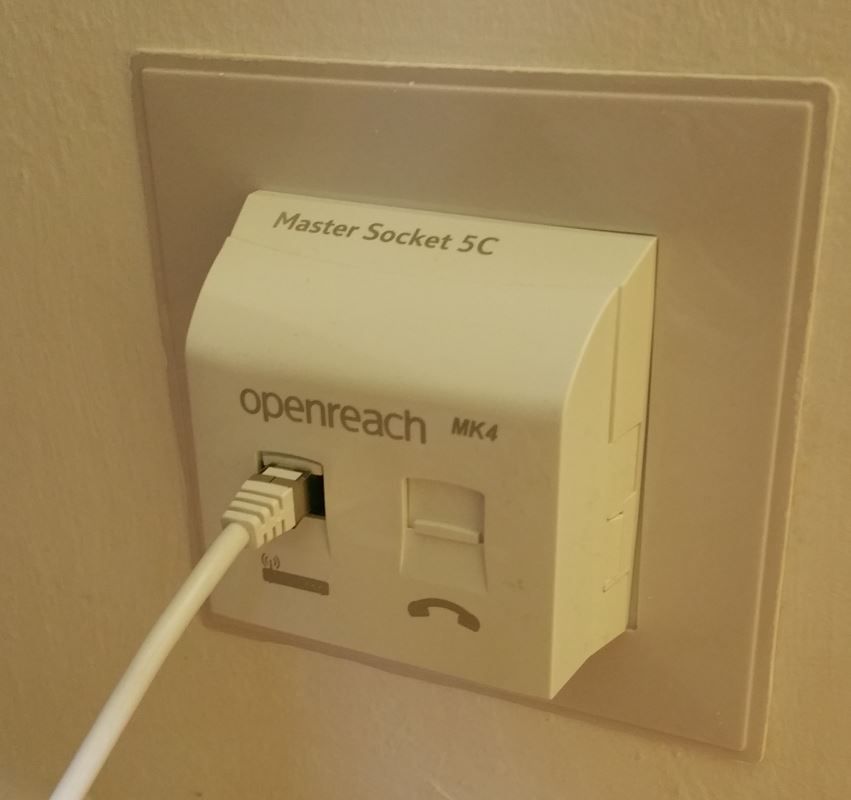 I also have a Zyxel (BCM63168 chipset) router ... not everyone is affected as it probably depends on if there is interference nearby ALSO you may have a lot of "overhead" bandwidth to cover it, the fact you got top speeds shows this is very possible.

go on Kitz, ISP-Review and other broadband forums and you will see many people complaining of faults with these units, not everryone but quite a few and most determining it to be the metal plate design

what happened is it used to be a PCB design inside (Printed Circuit Board) which had some components on it, now its just all metal plate...I think this acts as an ariel that does sup nearby interference, my stats prove it as  the upstream error protection was always OFF...since its intsall now its on...then got stronger....then stroner again (each time reducing my speed) - i had this same thing happen before a few properties back with the 5C...both times ive had one Ive had issues..and as I say its documented online...last time i put a NTE5a and SSFP Mk3 in demanded a line reset and issue was resolved....however i now have two issues...the original 10Mb loss on 28th July dropping it from 79 to 69...then 5C has dropped it to 59..then 55 a few days later, each time the upstream error protection getting higher

even when the original 1st engineer (onto no.3 now tomorrow) reset my line and left my NTE5A on at my request it still stayed stable at 70Mb, 2nd engineer that came out to try and get my speed back up to  79 said he couldnt BUT installed  a 5C without telling or asking, didnt realise until after he left...since then its hella dropped and error protection leverls going through the roof on upload as well as download - this happened last time at a different address on a different router

also, the 1st engineer said my MGALS is 55Mb and that he is not here to increase my speed as its "within" its boundaries.. LOL...  so I told him it was and IS 61Mb I say, he says no 55Mb the discrepancy is between you and your provider???????

I explained MGALS dropped from 61 to 51 on BT's end as soon as the 10Mb loss was asserted and they shouldn't be doing that on live customers, otherwise what IS the point of MGALS if you can just widdle down the connection to anything, you could have me paying for a 80/20 service and me be widdled down to anything BT likes whiles the customer keeps paying the premium,,,, the 2nd engineer was the boss "of sorts" and totally 100% agreed with me, he also said he is going to relay the info back about the 5C and its possible apparent issues that are there under certain line conditions.

I told them last time the 5C was put in the same things happened and i simply removed it myself, installed the NTE5A+SSFP Mk3 and requested a DLM reset and issue resolved....thats EXACTLY whats happened today (except I let BTo do it this time, as I was below my MGALS of 61Mb and thought I may get someone who may actually be able to restore the original 10Mb loss...but turned out no)...back up to 69 with just 24 ES per hour...back to normal...(with the original 10Mb loss still in pace which I now accept)

funny thing is he said "im not here to increase your speed because its within its boundaries"...then why bother turning up?

this is an obvious issue, you can not lower MGALS after signing up and promising 80Mb with MGALS of 61Mb then to lose 10Mb permanently and be told "oh?, well...now your MGALS is 10Mb less and is now 51Mb"...im sure OFCOM would have something to say about it....what happens when another "issue" occurs and I lose speed, will it be lowered again mid live connection?

I think there's some confusion about your minimum guaranteed speed(MGS). This is based on the lowest estimate of the line at the time you agree a contract with us and does not change for the duration of your contract term. However, the expectations of your line are subject to change based on various line conditions.

Having said that the estimates of your line are still pretty high at between 65mbps and 80mbps, and your line is in sync at a speed of 69mbps which is within the expectations and above the minimum guaranteed speed we promised you.

I've adjusted a profile on your account to reflect this new sync speed, if you can reboot your router you should see a higher throughput than before. Let us know if you get any further issues.

@snadge what is your current FTTC stats showing at the moment from your Zyxel (need to see the full stats) and also ask PN to run another GEA Test to see if crosstalk are detected?

@snadge So, Gandalf has run the GEA Test for you - it seem that crosstalk has now ruled out. Look like u need to wait for at least 3-5 days for to bring back G.INP and Interleave Depth to push your sync rate back to 80/20. If it doesn't then look like requested for a full DLM Resetted.

@goldenfibre - INP and Interleaving actually lower your speed when turned on ...not make it higher?  Interleaving of 1 means OFF Impulse Noise Protection (INP) of 0 = OFF - so error protection is completely off right now, the BTo Engineer did the DLM reset.

My ES per hour is averaging 25 which is below the 30 per hour which is thought to be the "cut off" point where constantly above that then DLM will turn on error protection (Interleaving and INP) (and lose about 6Mb speed in my case, and latency up from 14ms to 22ms), nobody knows the real number as far as im aware but on various broadband forums 30 ES/Per hour seems to be the magic number what people are saying it seems to be

also I am not G.INP able as my DSLAM is Infineon/Lantiq, as far as Im aware G.INP only works on Broadcom based DSLAMS/MSANs

@Gandalf - what is this profile? - my modem uptime is still the same, what do you expect to happen should I reboot?

p.s. the engineer found No Issues at all with the line even with the new kit which tests "both ways"... the issue was not crosstalk or such but the 5C itself, I say its the metal plate pulling in local EMI/RFI to the signal which affects mostly the upstream connection, as evidenced in my DSL-Stats recordings, this will only rear its ugly head under certain line conditions

@snadge The profile on your account should always match the IP profile of the line however if it’s set below this and if you have a static IP it will restrict your throughput. I just increased the profile following your sync speed improving after the engineer visit so if you reboot your router you should see a throughput closer to 69mbps.

@Gandalf - thanks for the swift response... Ive been taking the stats from the router as 'gospel' as 99.9% time they match on speedtests,,,, so I rarely test, however, just now I done a test on Think Broadband tester and only averaged 30Mbs down 7 up and 104ms latency...?? so ive rebooted the router and its back to normal....thanks for pulling me on that as it may have been a few days before I noticed lol....im fatigued with it all to be honest.

No problem @snadge Fingers crossed this is the end to the problems now and your speeds don’t drop again. Let us know if you do get any further issues though.

Hi Gandalf, just to let u know since the 5C was removed my connection has been stable as a rock, 69k down 24.7 on FASTPATH.

this process for a second time (in my occasion) shows that the 5C introduces REIN in the home into the signal..more so on the upstream, this only happens under certain line and home conditions.

I'm happy to see your connection has been stable. I believe we've already discussed your bills via private message. We don't charge a fee for £95 to install a line and in my 5 years we never have.

If you're referring to us covering the installation cost for a new line (£49.99) and the house move fee (£65) when moving home, then the new contract you agree doesn't directly cover this cost. We'd simply waive the fees by renewing your term.

no offense to you cos your a brilliant help..

but i was defo told £90 AS A reduced payment i as I couldn't afford the original £129, they reduced the price and spread it across monthly payments,, im gonna start using CubeACR to record all my phone calls from now one as it seems one thing is said then 18 months later the price goes up.....and its not right..

please, could you check the phone call?

all i know is i had a contract 40/10 - i moved to a different property with a line in that just needed activating, i tried to whittle the £90 down just for that but they wouldnt have it so im positive it was £90

The information provided by Gandalf is correct here, we don't charge/nor have we in the time I've worked here £129 for house move/NLI installation fees. You can find the info on your house move agreement here - this details the pricing & length of time you agreed to. Looking further into it, you've agreed a new deal after the house move here - again this confirms the pricing and length of time you've agreed it for.

I hope this clears things up for you, however, if you need further assistance let us know.