In the meantime, other than seeing your speeds dropping on a speed test, are you experiencing any performance problems?

what I can say is the engineer replaced my old (but still acceptable NTE5A) with an NTE5C, these SSFPs are known to be problematic, its well documented that they give off higher error rates and cause strange results in router stats applications, now I didn't realise this until after he left, I asked the previous engineer NOT to put one on for this reason so he didn't (as he said he was gunna) ...anyway, after the 2nd engineer left I knew with that 5C on it would be HOURS before INP would kick in (before it would be months/weeks - bad weather, then go back up after 10 days) - now this leaves me to believe that the 5C is the cause of the almost instant drop to 65Mb due to high errored second counts - this means now I have to spend £20 on an oldeer more stable SSFP because he took the old one with him

two engineers say they can't fix it and don't know what the cause is???  they...tried to blame VDSL take up - but that happens over several months as the Net Attainable Rate slowly dips....not an overnight 10Mb drop from a 4 hour down-time...no thats not true at all.

what is my next step - ceo office? ombudsman?  theres obviously a fault and needs recitfied...and why should I pay to replace my NTE5A

I'm sorry that you're unhappy with the outcome of the latest engineer visit and the NTE being changed. If an engineer notices that a customer has an older NTE they will normally replace this with the latest version. I haven't been made aware of any specific problems with the NTE5C.

Testing your line isn't picking up any connection problems at the moment and the line's sync speed is within the estimates for the line. As this is the case, we wouldn't be able to investigate this any further at this stage.

so who do i speak to next regarding this?

it is well documented amongst engineers that thes 5C's are problematic, one just has to search, some info on kitz too but other websites

my speed dropped 10MB in 4 hours (this is not VDSL uptake)..something went wrong, first issue also caused a NDT and two engineers didn't resolve it the speed issue - the fe=act it went off for 4 hours and came back on 10Mb slower and high power levers and no dial-tome tells anyone with any sense an error was made and has not been recifctfied

you should know that in 2011 i had a similar issue with Sky, it took several hundred calls...7 engineer visits (broadband engineers and a specials fault) and all BUT the 2nd broadband engineer found the issue "split pair" - so this shows alone the skill-set of these engineers is hit...mostly miss (no offece to those who are reading who iam sure are great'), it went on for over 6 months and had my head in bits taking time off work at that time for no fix,,, i got it sorted and buy way of apology i got line retnal free for a year and a free hub - im not excpecting this, but impecting that someone should find ths fault or my next port of call will be the CEO office

I got in touch with the CEO office who put me in direct access to Sky Networik Services to Co-Op on the problem with BTopenareach and as soon as I had someone else on board who knows their stuf we got it sorted withtin 10 days...

While I appreciate the frustration, we won't be in a position to arrange another engineer unless your speeds are below expectations, our tests are showing a fault or there are other issues affecting the performance of your connection.

At this stage I'd like to refer back to my post last night, are you experiencing any actual performance problems?

While I understand you're wanting to contact the CEO's office, any email or letter addressed to our CEO will find its way to my department (Customer Advocates) and the answer would likely be the same as we're providing you I'm afraid.

An alternative hypothesis is that something was changed and the result is that your line is now worse than it was, but there's nothing in particular wrong with anything that would be considered a fault, and therefore there is nothing for anyone to fix. I'm sorry but nobody should be demanding that their line gets improved to whatever they think its speed should be. It does not really matter what speed you used to get for however long before. Nobody was the right to demand they get the top end of their estimated speeds.

It is possible for a single crosstalker coming online to knock several Mb off another line's speed but that's beside the point. Maybe Openreach re-did a lot of wiring in the cabinet, and there's nothing wrong with any of the re-done wiring, but it just happens that as a result your line now suffers more from crosstalk so the speed is lower, but it's still within the range of whatever is deemed acceptable for your line and therefore there's nothing for anyone to fix.

@ ejs - I'm not saying want the max speed quoted for the line to be at the top advertised speed - it was near what got !  from day one in December I got 79(INP off) or 74 (INP on) and would be months between the two- now all of a sudden on june 24th dead on at midnight the line went down andexactly 4 hours later came bck up 10Mb slower with 35% raised power-levels indicating more energy needing to be used to get a speed 10Mnb slower

now for my concerns of the NTE55C - it has dropped connections at least twice/thrice since the engineer was here on Tueday, this is NOT THE NORM for sure,,, one time disabling INP OFF (70mB) THE OTHER PUTTING IT BACK ON (65mB) (next day) - so this points to a problematic NTE5C as many others have said.

heres a CURRENT screenshot of errors over time, normally with INP on they would be almost ZERO,,,as you can see there now over 30 at times which is the suspect threshold (between OR Engineers) to turning iNP back on 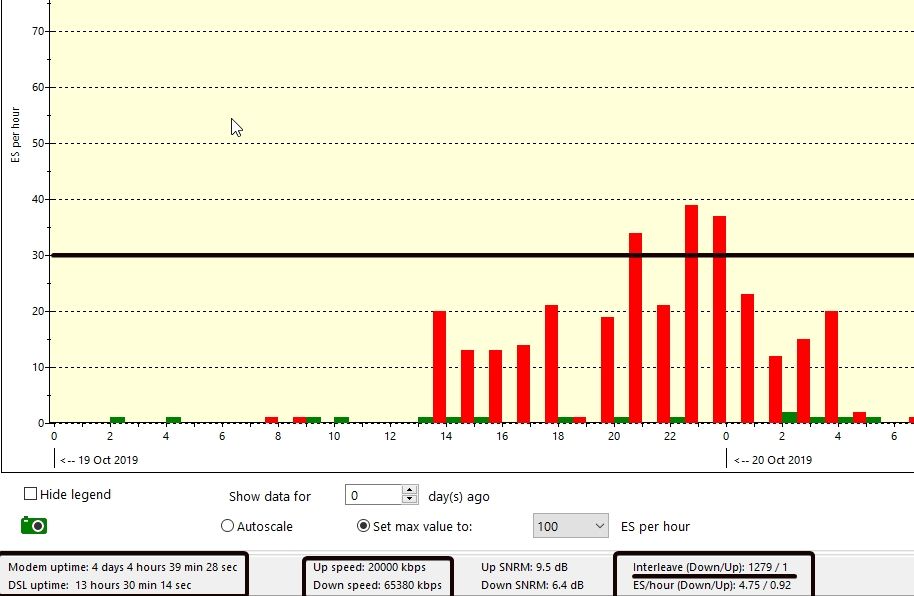 note: INP and Interleaving are both on

so so son=methin is not right br it NTE5C or connection, i will be ordering an older PRESSAC SSFP tongith and see how it changes, if it dos then i thibk I should reeentitled to costs for the NTE5

But you don't have any particular right to demand that your line gets restored to whatever level of performance it once had in the past. If, for whatever reason, it has become worse, but not bad enough for it to be deemed faulty, then there's not a lot anyone can do about it. The fact that this or that has been done to it which made it worse doesn't really matter if it's still not bad enough to be classed as faulty.

its done it again....jumping between INP ON and OFF very quickly because of the 5C faceplate (days rather than months/weather)

@ejs i think i have every right to demand this to be outright as its OBVIOUSLY something an engineer has done at the CAB that basic Linesmen cant find because they aren't qualified to find such faults, I have ordered at NTE 5A of eBay and see what happens, I bet it remains with INP OFF for much longer...its been off three times i know off since the engineer visit.

You don't appear to have understood the concept I was attempting to convey.

Openreach can do what they like with their network when they like. If they have done something that made the performance of your line worse, but it's still within the estimates and not bad enough to be classed as faulty, then it doesn't matter that they did something and they made it worse.

Also, if you wanted to downgrade to 40/10, surely there can't be anything that you can't do with your current 60Mb that you would be able to do with 70Mb.

I would like an engineer to come out please and put an older one, i have ordered one he can install if he refuses to have any. i want my connection restored as its now below MGALS (61Mb)

I believe it to be upstream errors introduced by the metal plating design of the internals on the NTE5C....its noted online in various forums that people have had many issues with this unit including myself before.

the SNR on the upstream is now 6db instead of 9db also the upstream interleaving has been applied and is the cause of the loss...all since the NTE5C was installed
Power levels are 4.1 and used to be 3.3, thus meaning more power needed to get just 59Mb>>???

Thanks for getting back to us @snadge I'm sorry to see your speeds have dropped.

Could you respond Here with your availability for an engineer to visit starting from next week and post back once you've done so? We'll then book the appointment in and email an escalation proforma to our suppliers.

thanks for the swift response @Gandalf .

I have replied with 3 days and slots, thanks

I've booked that in and update your ongoing complaint ticket here.

@Gandalf   now down to 55Mb... and raised INP levels even further.... the metal plate design inside the NTE5C acts as an 'ariel' that sups interference from within your hom into the signal I think... dropped twice since it was installed,,,  from 79Mb to 55Mb...I mean come on! I know its not Plusnets fault but it doesnt make Plusnet look very good when BT dont know what they are doing...sending noobs to jobs with iffy equipment!

get me a special faults engineer please