BT just repaired my phoneline which caused my Plusnet FTTC service to be unusable and no (BT) phone calls could be made due to very loud noise on line... .OR.engineer said my twisted pair got squashed in the green cabinet door or bracket probably by clumsy engineer (my words, no his!)

Sites like Speedtest.com fail, even this site took ages to load, other sites like Youtube seem fine. As the line was so noisy would that have caused a load of errors that need clearing by Plusnet/BT?

Seems like an uplink issue with loads of errors that I've not seen before. 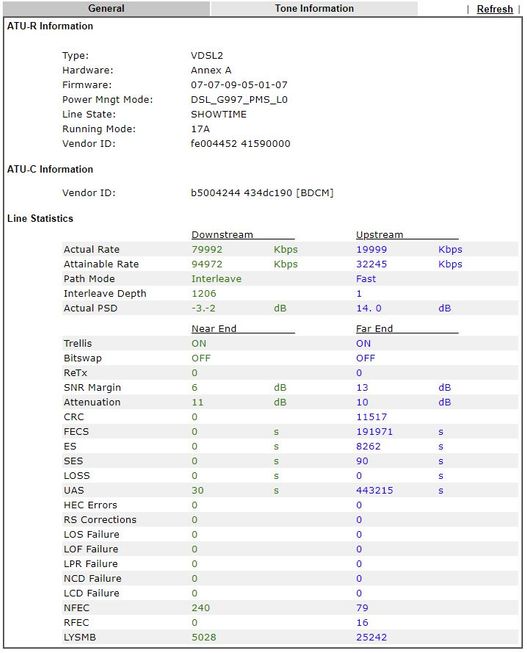 Can anything be done or do I wait and see if it clears? It's been 8 days of downtime and the 3G dongle just can't compete with my regular Plusnet service!

Previously I've had 5 years of solid 73m/17m connection that is super stable and reliable... now it's a right unpredictable connection.

Curious, I connected up my BT openreach modem and Plusnet Router (never used since first supplied with FTTC) and they work perfectly, back to the Draytek and it is still bad. I'll flatten the config on the Draytek and see if that clears the fault, otherwise it's a weird Draytek issue (on both that I have) that has happened since the line fault occurred.

Well the Openreach modem works perfectly with my Draytek 2762N via the WAN port, no amount of resetting, building new configs and upgrading firmware can get my Draytek's built in VDLS modem working properly (and they should have just worked once the line had been repaired)... they sync at the right speed and some sites work perfectly (Youtube) and other sites fail to load... very random and very odd....I can only conclude that when the line fault was occuring (for 8 days) that while I tried using both my Draytek modems, they somehow got damaged or corrupted and the modem part of the device will not reliably connect to many websites. Using the seperate openreach fibre modem connected to the Draytek and I'm back in business... annoying that I can't solve this and find it hard to beleive that a faulty line could cause modem damage but that's what appears to have happened.

Thanks to the clumsy Openreach engineer that shorted out my line cables in the green cabinet I suppose!

Solution to this was to change the MTU settings in my Draytek 2762n - it was set too high (but always previously worked) - and since the line repair I had to lower it to 1492 (it had been 1500), This suggestion came from Draytek.