If that's the case, the problem would appear to lie with the internal wiring of the property [or the faceplate], you can either leave it in the test socket or look to hire a qualified third party engineer to investigate further.

I am also experiencing massive amounts of drop outs, at least once a day it feels like. Both over wired and wireless connection.

When the internet goes out the red light on the router turns on and any attempt to load a webpage looks like this.

Can someone check on my connection history including those fancy pictures you have there and see if there is a fault with the line?

I've been putting off posting on the forum because I know how frustrating it can be to resolve issues like this with any service provider but the drops in internet have occurred during business skype calls and during live streaming causing a very large amount of frustration.

Any pointers would be good. I am using the hub one with the microfilter provided and the master socket.

So a day and a half the connection has stablelized a bit and no drops for now, if the engineer comes tomorrow and now says nothing found, I'll have a 65 charge added and be fuming. They should have come out at the time of the fault not 6 days later.

@TheOnlyRyan Our tests are showing a few drops but not one ever day. 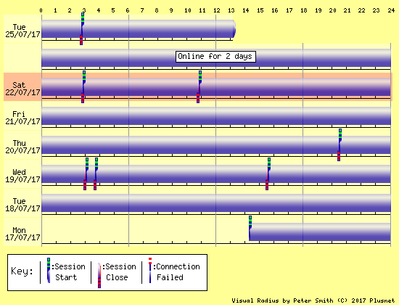 If the drops continue I'd recommend raising a fault here

@nigel1971 I can see you've called in regarding the appointment.

The dropouts are back despite being plugged into the test socket. Noticed some yesterday and they are also happening this afternoon.

I'd recommend getting this reported to us at http://faults.plus.net

Reported it yesterday evening. Any idea when I might hear something back? It's been dropping out all of today and it's starting to become quite an issue as we both work from home.

It can take up to 72 hours for our faults team to pick up a ticket.

However, I've just worked the ticket now. Let us know once you've replied.

I've been noting this behaviour of a couple of months myself and do get intermittent but fairly regular drops when using the system. Not exactly heavy use at the time, one online game session and skype running...

No filters, the phone line is never used (but sounded normal on test)

@SEG I can see the connection is dropping but we can't see any causes for this.

If it continues we'd recommend raising a fault here

I complained initially as my speeds were very poor sometimes as low as 10 meg even though I was signed up to fibre.

I managed to speak to an engineer who agreed there was a problem and launched a fault and an engineer would be in touch.

I received a text perhaps 2 days later stating that the fault had been fixed and there was no need for any further action.

However this week, the internet has dropped constantly especially between 5-9pm -my sister who lives around the corner is on EE and reported the same, my friend at the end of the street is with BT and she too says its been a nightmare.

Hi Gem53 and welcome to the community forums.

Sorry to hear you're having broadband issues. Having checked your connection and tested your line I can't see any issues at the moment given the graph and lack of drops below and the connection settings: 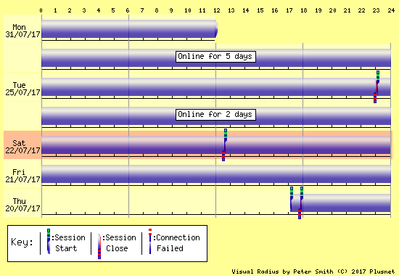 Although checking the history on the line I can see there has been some issues:

I'd recommend then if you notice any further drops or change in performance to run through some checks you side to rule a few things out.


If there's still an issue after these checks and in this set up then I'd recommend raising a fault here.