Same thing here. I now have another hub on the way to me.

I have just disconnected the Chromecast Audio and everything is back to normal.

The Hub One was in a loop continuously rebooting. Everything had been set back to default values.

The SSIDs and IP address range I had previously configured to be different from default.

That makes sense - I have 4 chromecast audios! Use them a lot so have switched back to the old router till it's fixed....if it's fixed.

So should we expect a Plusnet Hub update soon to address this issue or how can we use or update the chromecast audios now?

turned off the three chromecast audios i have and my hub one is stable again.

Kinda makes me chromecasts useless though.

If this fix is gonna take a few weeks it may be a new router for me.

Started having this issue yesterday, managed to talk to plusnet support this morning. Described what my router was doing and they came back asking if I had a chromecast which I thought was an odd question, but after reading this thread it seems to be the root cause! People need to be made more aware of this issue! It seems people on the google forum (posted above) are getting replacement chromecast audios.
Message 20 of 36
(2,758 Views)
0 Thanks

Okay I didn't pick that up. What's next then, are google or bt/plusnet going to release an update? I think some input from technical support would be useful to understand what will be done to resolve this issue.
Message 22 of 36
(2,720 Views)
0 Thanks

Googe have released an update that has crippled the hubone, even though they were aware this was going to happen,  Google is to blame

Anyone on the preview channel and able to update to the latest build? (you'd probably need another router to allow you to install the update in the first place)

Interested to know whether or not it fixes the issue. 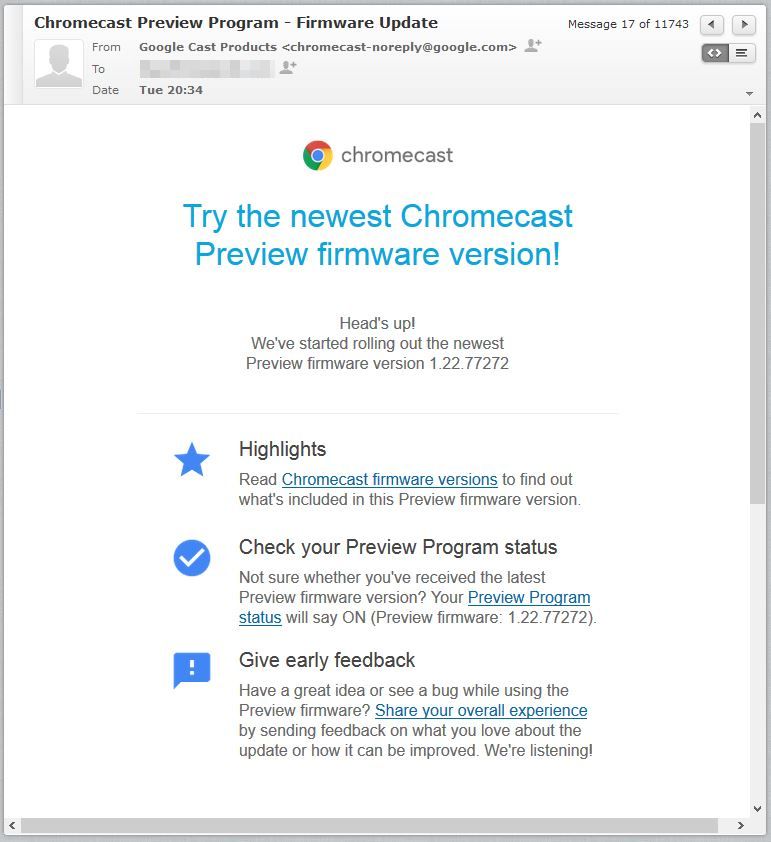 @bobpullen, There's a post towards the end of this https://productforums.google.com/forum/#!topic/chromecast/3PiH_40qLBw at 13:00 today

I've joined the preview program and updated to Firmware version 1.22.77272 which seems to have resolved this issue for me.

I had to go to a friend's house to connect on his non-BT broadband to do it. If you can get connected using another router, join the preview program through the Google Home app and reboot the Chromecast to get the latest firmware.

Thanks. We've had a member of staff confirm success too.

I tethered to my phone to get the chromecast online, i then used another phone to open up the home app, chose the developer option and then chose to reboot the device and it done an update in about one minute.  Its not running on the Plusnet router

So pleased to read there is an explanation for this. I spent 5 hours yesterday to eventually prove it wasn't the hub one that was faulty - the rebooting started every time the CC audio was turned on after working ok for months. CC2 still working fine.

Have opted back into the Preview Programme and rebooted the CCA, and it updated to 1.22.77272. Issue with router rebooting has magically gone away.

So basically Google are talking BS! Not impressed with them, their devices are great, but their support seems lacklustre at best 😞


So pleased to read there is an explanation for this. I spent 5 hours yesterday to eventually prove it wasn't the hub one that was faulty - the rebooting started every time the CC audio was turned on after working ok for months. CC2 still working fine.

It seems to me to be an issue with the Chromecast Audio's firmware. I'm sure Bob will clarify this when he has spoken to colleagues in Plusnet and BT Consumer.

At the moment, the only fix is to opt into the Chromecast Preview Programme on the Home app, this will upgrade the device to 1.22.77272 which doesn't appear to have the issue. However, to do this you have to get the Chromecast Audio online (using a WiFi hotspot on a phone or similar).

Even when Google release 1.22 firmware to the masses, you have no way to update the device except by connecting to a WiFi hotspot - unless Plusnet/BT can update the router's firmware to handle the "exception" which is causing the router to reboot.

Would suggest everyone call Google to report this fault https://support.google.com/chromecast/answer/6025971?hl=en-GB