Reported slow line speeds today which I have been told have now been fixed. I was told to restart my router after 4 hours and that my speed should have returned to normal but it hasn't. My estimated speed according to plusnet portal is 74Mb (This may vary between 57.2Mb and 74.9Mb) - Checked on 2016-06-28 11:36:15. Line speed is 78mb. After resetting the router I'm averaging around 43mb at the moment. It's been as slow as 26mb today. Tried factory reset too but no different. Been around 8 hours now so I'm well past the 4 hours to wait till I do the reset. Tried a second router and same speeds on that too. BTW is only showing acceptable range of 32.05mb to 45.79mb and an ip profile of 45.79

Connection is wired by ethernet.

If you can PM me your username we'll get that looked into.

Finally got a reply to my ticket but it's really unacceptable as far as I am concerned.

I have been on unlimited fibre extra for nearly 3 years and average around 60mb, been as high as 64 for a while and as low as 57mb for a while, but always within that band. My estimate from Plusnet is around 57 to 74 so it was within those limits, albeit at the lower end.

I raised a ticket because this week it started to play up, went as low as 26mb on one BTW test but most tests are around 45mb. I've attached all the images including the results from the Plusnet ticket.

They are saying in their message to me that I should accept the new speed that I'm getting and that there is no problem. Have I been downgraded against my will because that's all I can conclude at the moment.

Just signed up a 24 month contract for a Youview box but the whole lot will be getting sent back if they expect me to trundle along at 45mb. 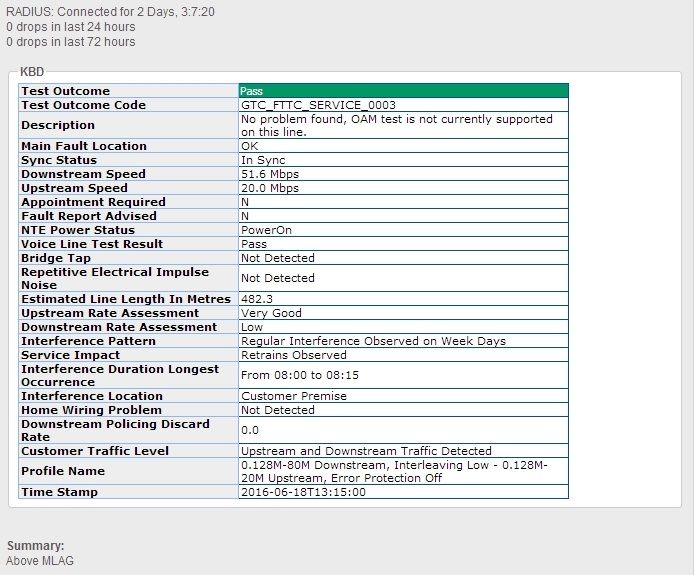 Another reason I'm not happy with the outcome of this latest ticket is that when I contacted online chat I had a different response. I have the transcripts from the online chat conversation and this is part of the reply from that chat.

"I have been able to make a change to your account which should help speed the internet up again. All you need to do please is to reset the router after 4 hours and you should notice the difference. I have performed some maintenance on your account and this will restore your speed to its correct value. It had become lower due to automation it does this if it thinks there could be a problem."

So the person in chat acknowledged that my speed had in fact become lower due to a problem. Resetting the router however had no effect. So basically I am being throttled, capped or whatever you call it.

The response from the ticket was - "On testing your connection the service is stable and the speed is above the current minimum requirements for the connection."

Is 45mb download acceptable when my estimated shows as 74mb? Is that enough of a drop to be able to cancel my contract?

Hi Paul, I'm not happy with the response the advisor given on the ticket and I'm really sorry to see they've done this.

I see they've mentioned that the speed is above the Minimum Guaranteed Access Line speed (For a bottom estimate of 57.2Mbps the MGALS would be 49.91Mbps), which although correct, is not an excuse to try and fob off trying to get the speed back within your estimates.

It is simply the speed your service would need to stay below following exhausting all fault investigation options, to allow you out of your contract without early termination fees.

I'm going to pass feedback on to the advisors manager regarding this and make sure our faults team take action with further investigation as to why your speeds are below your bottom end estimates.

Thanks for the reply Harry. Will look forward to a positive outcome hopefully.

Did a speed test from 5 different online testers just now and they all were in the 45mb to 45.5mb range for download with 18 to 18.86mb upload. I guess they probably mostly access a similar service. BTW was the only one showing different and that was 43.78mb down and 12.86mb up which is different to the others, especially with upload speed. So from all the tests at my end they aren't even getting to the 49.91mb.

Had a BT engineer out for 4 hours this afternoon. Checked all the stuff in the house which seemed mostly ok, some corrosion outside where it enters my house which he sorted and waterproofed. Then he spent some time up the telegraph pole, some time at the box on the road etc and managed to get me up to speed. Said it was a poor quality line to the house from the box, lots of cross talk interference and so he put me onto a new line. Speed went from 45mb on the speed test up to my new speed which is now averaging 71 to 72mb. So it paid to keep on moaning instead of being fobbed off and accepting the Plusnet reports to my fault tickets.

Glad to hear that's sorted. Thanks for letting us know