This is my second post on this subject, it looks as though my first post has disappeared!

This lunchtime, my internet connection started to become very intermittent. The flashing orange light on the hub would show, followed by the orange B, before after about 5 minutes, the blue light would display. After another five minutes, this action would repeat itself.

After suffering from the above six times, I decided to reboot my hub but not only a reboot, but a factory reset (just in case). After inadvertently entering the wrong password a couple of times, I finally got the right one and my internet connection was once again established. OR so I thought. Despite the blue light, the hub telling me that I was connected, I couldn't reach any websites or ping any URL's.

Phoning up PlusNet support, I very nice lady talked me through several items, told me that the password for the connection was blank, despite my getting a blue light lit on the hub and that I had a line fault, to which she would arrange for Open Reach to intervene with.

However, I asked why I couldn't get any websites to load, if she was able to reach the hub and the hub showing a blue light. She couldn't answer me. I must admit to not trying to ping an IP address such as, 8.8.8.8, in order to rule out a DNS issue.

Has anyone experienced such an issue as this?

Today, my internet connection kept dropping out after 5 minutes of use, after the sixth time, I decided to check everything out. The hub would connect to the internet, stay online for about five minutes, then flash orange before getting the orange B light. After about another five minutes, it would reconnect and everything would appear as normal.

I completed a factory reset on the hub, re-entered all of the connection details, would get a connection to the internet but then wouldn't be able to connect to any websites. Phone line has a crackle free dial tone, discounting any potential issues.

On ringing PlusNet, they did the usual tests before telling me I had a line fault and that they would book OpenReach to come round and to fix. When asked about the blue light still being on, but not being able to load up any websites, they were confused, as they kept telling me that I was connected and shouldn't have an issue.

Has anyone else come across a similar issue? In that although everything says you are connected to the internet, the blue light, light admin section within the hub, PlusNet support, but still unable to visit any websites or ping any URL's (I must admit to not trying an IP address such as 8.8.8.8 ).

Looks like your post was may have been just caught in the automated spam filter, I've asked our mods to check.

I'm sorry to see you're experiencing connection problems. I can see your line is dropping out heavily as shown below: 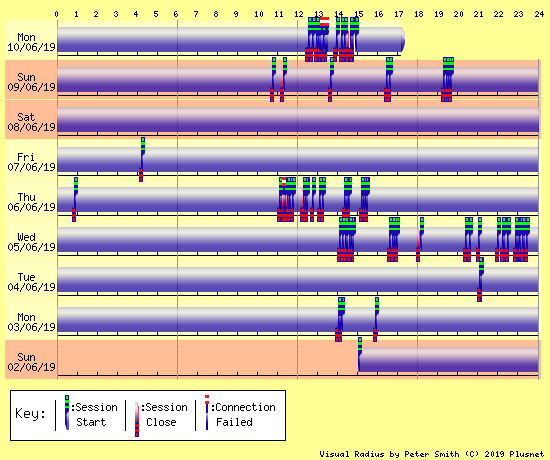 Our tests are showing a high resistance fault somewhere along the line. I'd recommend running through the steps Here and if you still experience problems, please report a fault to us at http://faults.plus.net.

If you can let us know over here once you've completed this we'll pick this back up as soon as we can and arrange an engineer visit with yourself to investigate the fault further.

I'm back home now as I had to move premises since I work from home a lot and need the internet in order to do anything.

The hub is plugged into the master socket, as in, removed the face plate on the BT socket and still having issues. This is further compounded by the fact that according to the admin section of my hub, I've been connected to the internet for over 6 hours and over 274MB has been received! That's despite me not being here and according to my browsers and ping etc, I cannot contact any websites via URL or IP address (ruling out a DNS issue).

Is it possible that for some reason that my external IP address is being targeted by a DOS attack? It could explain the fact that so much data has been received and yet I cannot get out.
Message 4 of 11
(429 Views)
0 Thanks

My hub is currently receiving around 0.8MB per minute of traffic. Which is quite a bit considering that no computer can cannot to any websites.
Message 5 of 11
(422 Views)
0 Thanks

It is now up to 340MB, that amounts to GB's in a single day, when nothing is downloading from the internet. I'm intrigued as to what could be the issue. (I'm currently using my phone's data connection for internet connection.)
Message 6 of 11
(404 Views)
0 Thanks

Just checked my internet connection, the blue light is still firmly lit and shining nicely in my front room.

Out of interest though, a little Linux server I have can still connect to the internet and download anything it wants. On investigation, the wireless connection is hardcoded but all of the other computers use DHCP. Checking a Windows and a Mac based laptops, both are being assigned a gateway address of 192.168.1.120 which would explain why they cannot connect to the internet.

So I wonder why my hub is giving out an incorrect gateway address, the hub is situated on 192.168.1.254? Looking at the TCP/IP settings on the hub, above the DNS server addresses is a gateway address of 192.168.1.254. Checking the advanced settings on the hub, in the IP Settings, everything looks as it always has done. There's no 192.168.1.120 in there anywhere, in fact that IP address is within the range of the network DHCP range.

Well, I've managed to get the hub giving out an incorrect gateway IP address by performing a second factory reset on the hub. It is now showing and giving out via DHCP the correct IP address. :)

Just need to now wait for OpenReach to sort out the high resistance on the line such that I may get a better line speed of 24Mbps.
Message 8 of 11
(368 Views)
0 Thanks

Thanks for letting us know you now have the correct IP coming from the DHCP.

In regards tot he high resistance fault, we would need you to use the link provided above again, it looks like you started the diagnostic/log a fault process but did not complete it.

Give us a shout once you've done this and we can progress forward accordingly.

Speaking to a couple of ladies yesterday on the phone from PlusNet Support, they have told me that a fault call has been logged with OpenReach who should be out within 48 hours to sort it.

The reason for putting the information on here was to do with having an internet connection, the blue light, but not being able to get onto the internet.
Message 10 of 11
(351 Views)
0 Thanks