Fibre Max speeds all over the place

Fibre Max speeds all over the place

Was recommended to Plus net after a colleague advised how great his service has been.

I'm just outside of the 14 day return period, and have been experiencing random speeds since the day it was installed.

When my other half done a speed test straight after it being installed she was getting 71mbps (on speedtest.net). Great! As the day went on an I got home from work, I proceeded to test and found that from 6pm until 11pm, we were only getting 10-20mbps. Finally, about 1am the next day, we were back up to 71mbps.

The problem is, everyday I've been checked and my fibre connection seems to both be periodically disconnecting, but also getting horrendous download speeds that differ all the time. Testing right now for example (1:30pm 22/11/2016) I'm getting 60mbps, 18mbps up, which is good, but not near the speeds I was originally getting (or have gotten at other times). The speeds at night (6pm til 11pm) are still consistently around 10-20mbps, with it affecting my games downloading (I'm a games reviewer and developer outside of my full time job). The other night it took over an hour to download a 3GB update from Steam.

As per my colleagues recommendation, I've done a BT Line checker, with the result attached to this post.

Any help or advice would be greatly appreciated,

I have this problem all the time you can get nowhere with plusnet they just fob you off after a 45 min wait on the phone, you should do what i am doing & build up evidence against them by taking photos of your speedtest results & keep copies of their useless chat transcripts they are know one of the worst providers.

This is due to traffic shaping IMO. Plusnet are forthcoming with their policy, which would limit download speeds at peak times so that streaming, online gaming and other services work well (spoiler alert: these services are still struggling regardless). That being said, it shouldn't limit your speedtest results, so something dodgy is most likely going on behind the scenes (probably throttling your connection during peak times for all services).

I would beware admitting that you use your personal internet for 'business purposes', as this could be seen as misuse.

I presumed as much too, was just reaching out as my colleague explained I should still be getting the same consistent speedtest's even in those traffic managed times.

As for the games stuff - reviews are done for free and games development is more of a hobby at this point, so doubt you could classify it as "business"

More likely to be congestion.

Ex-Plusnetter now living life in the G,fast lane!
Message 5 of 10
(841 Views)
0 Thanks
Highlighted


Plusnet are forthcoming with their policy, which would limit download speeds at peak times so that streaming, online gaming and other services work well.

"For example, when a broadband connection has reached bandwith capacity, Plusnet give streaming games and video high priority on that particular connection to ensure they don't buffer or lag."

"However, Plusnet's traffic management only comes into play if you're using more bandwidth than your broadband connection can handle at one time, rather than because you exceed a set usage threshold at a particular time.

So, even if you're using all of your 16Mb connection to download movies and music when every other Plusnet customer is online, this will only be slowed down if you then start using Skype, as this will be given priority because its performance is more likely to be affected by a lack of bandwidth."

PN have said in the past that they can apply it at at the network level but that they only do it in exceptional circumstances such as when there's a major fault. So the only time you should see any kind of throttling is when someone else is using your connection to do something judged to be more critical.

That being said, it shouldn't limit your speedtest results

Well actually it should. Speedtest traffic would be identified as low priority so should 'give way' to everything else. But of course it should only be limited if someone else is doing something with that connection.

, so something dodgy is most likely going on behind the scenes (probably throttling your connection during peak times for all services).

I'd suspect congestion except that I'm only just down the road and for FTTC on the same exchange. 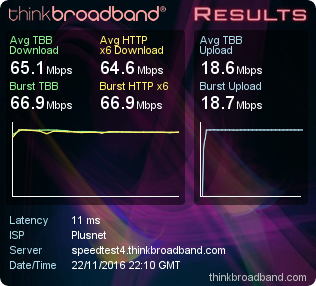 My thoughts are that Dan as a new customer is on the new network and going through the crappy server(s). I have a static IP address so that probably immunises me and may mean I haven't even been migrated yet.

What does this say, Dan:

And from their status page:

I'm not sure if that's the same 'new network' bug or something different.

You are currently connected to gateway psb-ir01.

This is located in Southbank Point of Presence.

Oddly enough, even at night I'm no longer getting the 71mbps that I got when the broadband connection was first set up.

Ah. Yes that's the new network I believe. One thing you could try is logging off, waiting a minute then logging back on. That will potentially change the gateway you are on and some people have reported that fixing their issue. If you're using the Plusnet router I believe there's a Disconnect option in the settings. Use that rather than power cycling as turning the router off will cause it to drop the VDSL connection and you don't want to be doing that too often.

Otherwise it looks like you'll have to wait for PN to fix the problem. At least they are aware of it and working on it.

There is no evidence they are dropping anyone's speed. It's a fault and has been acknowledged as such (assuming Dan is indeed suffering from the current packet loss issue). Service providers always operate on a 'best efforts' principal. The law allows them considerable leeway because that's the nature of providing a service. As long as PN's charges and performance are broadly inline with other ISPs and as long as they notify us of permanent material changes to the service they offer they are doing all that is required of them.

In simple terms: Being an ISP isn't easy. The law understands that and accepts that sometimes things will go wrong.