My neighbour has moved about 1 1/2 miles away. They used to have FTTC as per my recommendation.

I checked BT Wholesale with their no and it doesnt look as though they can get FTTC. 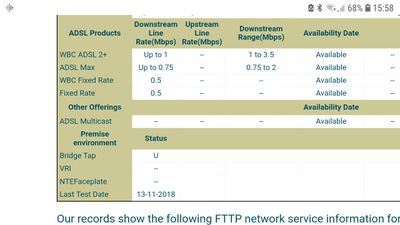 It does appear that only ADSL is available. However what FTTP Network service information is being shown?

Thanks Brian. The result from the link says fibre is available.

Before my neighbours moved they were on Fttc with 7mb. Now they are receiving 1.3mb which is very poor. This as reported by the router. Speed checkers are showing slightly lower speeds.

The customer is not 'teccy' . They have a new computer and updates to Windows are taking a long long time.
Any suggestions Brian?

Can you post an image of what the OpenReach "When can I get Fibre" site says?

If fibre is available then the Broadband Availability Checker results don't make sense.

Another thought just came to mind. Are you testing on a wired or wireless connection?

Speed tests are always best done on wired. Indeed PlusNet always ask for this to be done if there's a problem to ensure it's a line fault and not local interference / problems on WiFi equipment.

Thanks for the reply Brian.

The BT fibre check shows FTTP is available. Would have thought this would have been FTTC as well?

I didn't check the speed direct as they had no convenient way of connecting to the router directly. When I queried the the router the speed was about 1.3 for download on the stats.

Hope the this helps.

"Great news, you can order a Fibre to the Premises service today.

Check with one of these Service Providers to see if they’re offering Ultrafast Fibre in your area.

It appears your neighbours are subject to the dreaded "records mismatch" on the OpenReach database. On the Broadband Availability Checker there is an option for both a Post Code and an Address check - run both of these to see if FTTP is offered.

FTTP is a totally different technology to FTTC. It could well be FTTP was installed as the house is too far from the cabinet to get an acceptable FTTC service.

You didn't say which ISP is involved. If it's PlusNet then your neighbour is currently out of luck as they're not currently offering a FTTP option. You need to look around at who is offering FTTP  - few providers offer it on a consumer basis. BT and Zen Internet are the well known providers and I believe Sky is prepping the launch of a service. There are others.

The check with post code and address shows FTTP.

They are with Plusnet so, I assume its a no hoper.

Thanks for the help.

It's not a case of "no hope" - just simply how badly do your neighbours want faster speed. It is widely believed PlusNet will offer FTTP is the future but cannot (or will not!!!) say when until they decide to do so.

As a PlusNet customer someone like @Gandalf  might well be willing to take up the records mismatch on behalf of your neighbour.

If your neighbour wants faster speed now then they'll need to move ISP. Unlike FTTC, FTTP has no distance limits so, for example, on  a 38/10 service (Zen Internet) they would get pretty much the advertised speed. It's been a while since I checked my FTTP speed but on a "up to 38" service I was regularly getting 36/37. If your neighbours are "in contract" this might make moving slightly more expensive.

PS - you should check your own phone number / post code!!!