I'm on a 40/10 FTTC broadband line. I fairly regularly check my line speed with SpeedTest.net and have been noticing a fairly steady drop in line speed over the last 3 years or so. In 2017 I was getting 37 Mbps, in 2018 to early 2019 it became less consistent by I was still regularly getting 35 Mbps, after that it dropped to around 29 Mbps through to mid-this year. Much more recently it dropped to 16 Mbps. After complaining the speed has raised to 25 Mbps.

BT Wholesale diagnostics say line is clean and clear despite being long and there are no faults. The 16 Mbps was due to the IP Profile being set to 17 Mbps. Now it's set to 27.1 I'm getting the 25.

When I started my most recent contract Plus.Net suggested the likely speed range would be 32 - 40 with a guaranteed speed of at least 30.9, so I still have an active speed complaint open with support.

What I'd like to understand is what is going on? The raw line is clearly capable of 37 Mbps, it was clean / stable at that performance for some time.

Now, even at 4am in the morning, its never even close, as BT / PN seem quite happy to set the profile to a much lower speed.

I'm trying to get my head around what my expectations should reasonably be, particularly as the biggest drop in performance was when I switched from Sky to Plus.Net.

Rather than rely on peed tests you would be better going back to basics.

1. If your phone line has any noise you won't get the best broadband performance - dial 17070 option 2 - from a corded phone - you should hear no noise, crackles or pops.

2. Check to see what your line is capable of on the DSL Checker https://www.broadbandchecker.btwholesale.com/#/ADSL

3. Get to know your router, in particular the sync and max attainable speeds - the Help Desk page on the Hub 1 shows even more info.

4. Ensure you have a filtered master socket, and are not using an extension socket.

If you want to take things further there are programs to monitor stats, speed and latency/

Speed tests are OK, but you must ensure nothing else is running at the same time, whereas sync speeds are easier to spot if things are starting to deteriate.

1. Phone noise: I called the number and listened and could hear no noise, cracks or pops. A very quiet hiss. In addition when I ran the BT wholesale diagnostics it indicated the line was clear/good.

3. Router: I'm using an ASUS RT-AC68U as there is an ongoing firmware bug with the Plus net official one. This router is supposed to be rated to significantly higher than 25 Mbps and there's plenty of discussions of it achieving much much higher in the real world.

4. Socket: I am using a filtered master socket

The key point is that up until middle of last year I was getting 36-37 Mbps real world, then it dropped to 30 Mbps and now I'm getting 25 Mbps, so I feel fairly confident the line and my router are capable. In addition Plus.Net guaranteed 30.9 Mbps. So I'm confused about why the IP Profile is 27.

The difference in performance when actually using the internet is pretty obvious with lower download speeds etc. 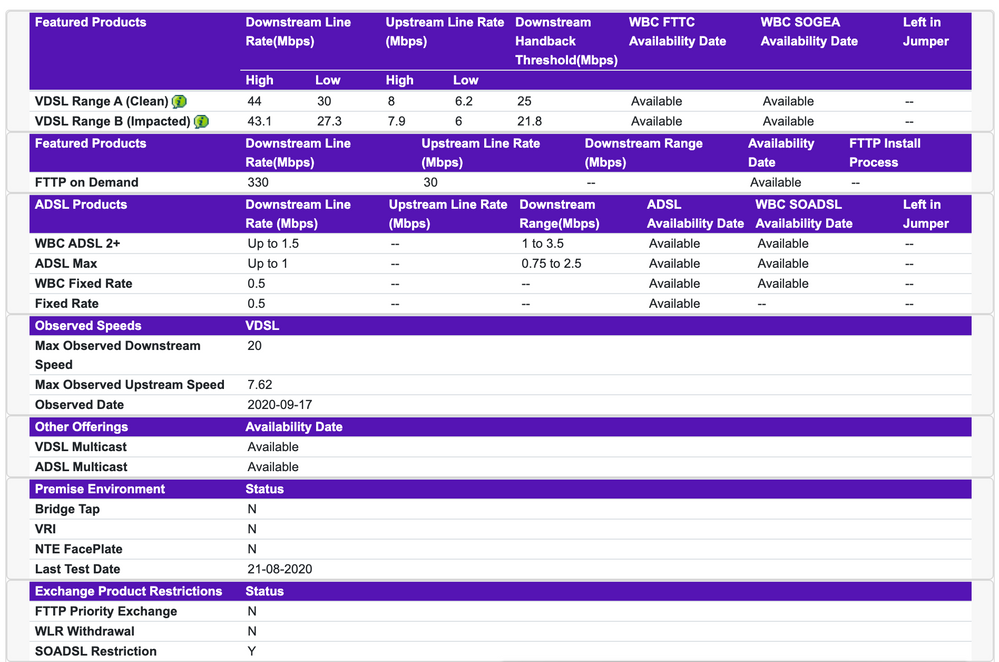 According to the DSL checker you are only in sync, or were in August, at 20Mbps.

Does your router not require a modem?

Who knows why your speeds are so low, but have you reported a fault?

@Mustrum  It looks like the 17th of September to me that the speed was 20Mbps, Something very wrong with the line.🤔

@RealAleMadrid  Well spotted Alas too late for me to edit my post.

BT’s IP profile mimics the sync speed your router physically connects at to the cabinet. It’s normal for the IP profile to always sit just below this.

Try raising a fault at http://faults.plus.net

This will create a fault ticket and get you into the queue for Plusnet to investigate further. It’ll probably end up to an Openreach engineer.

Thanks for the interest all.

@Mustrum as I mentioned in my original post recently the speed dropped particularly low and I raised a fault, following which the line speed was raised to the 25 Mbps I have at the moment. The 20 Mbps will be an artefact of that process.

My ASUS router has a built in modem, as does the Plus net router it replaced.

@Thrail the IP Profile was set to ~17 when I raised the initial fault and has since been changed to ~27. My understanding was that it is supposed to be set to a high value initially and then the HW monitors the line and adjusts it until it is stable.

The stability can be related to the line quality to the box or possibly the capacity of connection from there to the ISP. I assume it can therefore be influenced by the number of customers locally, whether the ISP has LLU at the exchange and the capacity at the exchange.

As I've had consistent 37 Mbps when I was with Sky I'm assuming this is a fault or Plus Net limitation. Sky have LLU at my exchange. Fault seems reasonably likely due to the fact that Plus Net gave me a guarantee of 30.9 Mbps.

I have raised a fault and the initial result has been that the speed went up a bit, now they are scheduling and engineer to visit as they still haven't achieved the minimum line speed guarantee.

I was posting here in parallel to see if anyone had similar experiences and gain technical knowledge to help understand what is going on / what I should expect.

@jphdavis  if your router has a built in modem then it is likely to be a DSL 68U  https://www.asus.com/uk/Networking/DSLAC68U/

The one you quote has no modem.

Forget all your LLU theories, all ISP's use the same green Openreach cabinet for FTTC connections - the backhaul may vary, but line speeds are determined by the distance to your cabinet.

Line noise is the most common cause for low speeds, alas it is not always there when you check.

Raising a speed fault , asking for a GEA and radius log check, and a DLM reset would be my suggested way to go.

You're quite right it's the DSL-AC68U

I had already raised a fault and they ran the tests (attached for interest), and I had an engineer come today. Following the visit my internet is back up to about 35 Mbps.

I generally find it amazing that all BTs tests/reports say all is well for a line where perf was half the minimum.

@jphdavis  The first thing I would do is stop using the Asus DSL-68U at least as a modem because  it has a notoriously bad modem chip inside which causes all sorts of problems, like disconnections and loss of speed and it doesn't get on well with the Openreach DLM system. You will probably end up banded, that is capped at a fixed lower speed.

Unfortunately the Plusnet Hub One is pretty useless, I wouldn't use one.

The easiest fix is to use the Asus just as a router ( The router and wifi functions are good)  and connect it to an external modem.

I use a Huawei HG612 3B, which was supplied by Openreach for early FTTC connections, they are still available second hand and although a bit long in the tooth work well, ( I do have a spare just in case)

You may find your speeds improve with the better hardware.🙂

@RealAleMadrid thanks for the advice. After initial high perf, ASUS began complaining about line stability and speed dropped, so I secured a second hand 612 on ebay, a bit of a pain to manage/setup but in the end seems to be working with default setup and line has stabilised at reasonable speeds, at least so far.

I've found suggestions that for home use QoS is not required and has slight performance penalty, so I may try disabling that later to squeeze max out of line.

To help emphasise what  @RealAleMadrid stated.

The DSL chipset in the DSL-AC68U is not fit for purpose and is not approved by Openreach.

It is good at ruining the performance of any VDSL line.

Do yourself a favour and do not use the modem part of DSL-AC68U.