Not seen that, over Chrismas I was testing bngs and did over 100gb downloads but once had a failure, just some slow downloads intermittently.

When it was slow I would see lots of out of order packets and retransmission requests and flagged something like multipath causing a problem somewhere.

I'll try the tests from my line tonight when I get home and see if I get the same, with some traces too
Message 361 of 386
(1,324 Views)
0 Thanks
Highlighted

I get packet loss in the evenings, was particularly bad on Saturday / Sunday night making games unplayable on my Plusnet line. This evening (23rd January) packet loss is modest @10% according to my router.

I have two lines, one is VDSL with static IP on PlusNet, my other line is on a different ISP and has no issues. 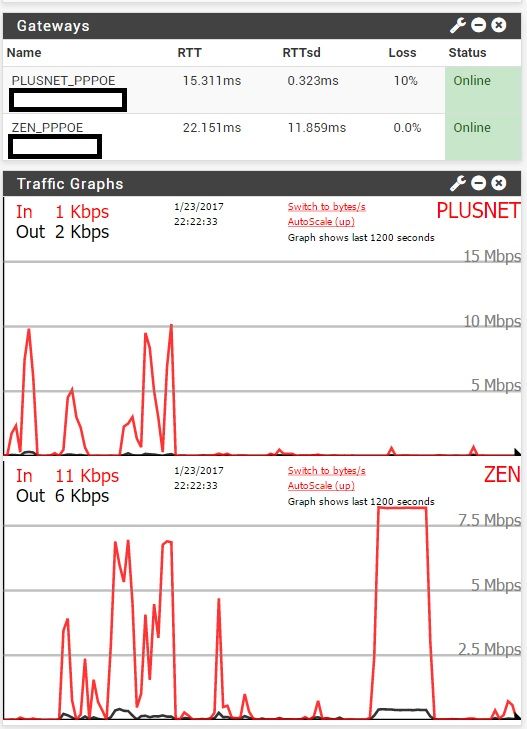 During the day it is fine, maybe PlusNet has congestion at peak times?  Not very good anyway.

I get packet loss in the evenings, was particularly bad on Saturday / Sunday night making games unplayable on my Plusnet line. This evening (23rd January) packet loss is modest @10% according to my router.

Typically I have only observed it in the evenings and it starts to improve after around 2200 hrs - the screenshot above was taken at 2230 hrs and things had already started to improve.  This would seem to coincide with peak domestic usage hence my question about whether it is related to congestion.

Is there any point in reporting it as a fault? 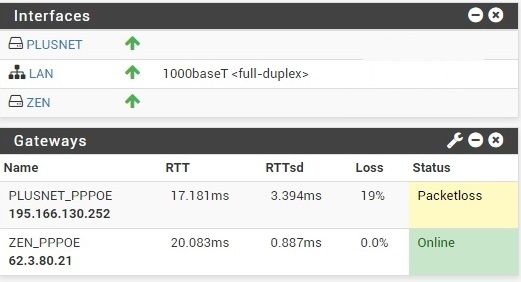 What is your router measuring packet loss against? Is it pinging the gateway?

What is your router measuring packet loss against? Is it pinging the gateway?

It's a pfSense router, it uses the apinger daemon to monitor a server of your choice, it is recommended to use a DNS server so currently I am using google DNS 8.8.8.8

Good point though, I will try PlusNet default DNS server - I guess this will indicate whether it is related to congestion out of PLusNet's network

Well something is certainly going on somewhere.

As for the past week at least, I have been getting heavy speed losses prior to 10pm. To the tune that my connection is around 10-15% of my line speed with a side helping of high latency.

Someone needs to call the engineer.....again.

A quick check for yours @Matt2725 advises that the Exchange is in need of additional infrastructure which our suppliers have advised a timescale of 17th March. Your SVLAN is heavily over utilised as are all the others in the exchange.  As this is an infrastructure upgrade there's little more we can do other than advise be patient.

Fair enough. I expected it to be something along those lines. Not to name suppliers but I'm sure we all know who didn't think ahead to expect that level of traffic.

Edit: Well it's certainly been getting progressively worse. Plus I'm not entirely sure that a wait time of (nearly) 2 months is entirely acceptable, but it is what it is.

@scrookes can I get a check as well please? Worle exchange and the gateway I'm on is Southbank.

My ping issues aren't as severe but I still get above normal packet loss from 5pm onwards, my single thread speed also drop dramatically and has started happening this past week. Other than that the line is completely stable with only 190 ES and 49 SES over a 21 day period. Any PPP session disconnections are manual and that's me trying to get a different IP or hop gateways. 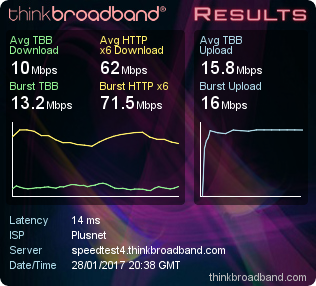 Also, as I'm writing a comment any way, what has happened to the dynamic IP system? I used to be able to get different IP's literally every time I would reconnect, ever since mid-2016 or so it takes me bloody ages if I want to try and get a different IP manually, sometimes over 50+ disconnects.

Mine seems to have gone away for now.

New Master socket with remade connections (resistive difference is just over 1 ohm now apparently) reset line and managing not to get on a duff gateway seems to have helped....

@NoZephy The Thinkbroadband tests have been a bit strange for some time, there are several threads about it if you have a look, and doing 50 disconnects to get a new IP address will only make DLM lower your speeds, and with the design of the new network ip addresses are less likely to change with disconnects, again, do a search, it longer has the same affect. The Ookla speed test seems more consistent.

@Mustrum These are PPP sessions that I'm dropping/reconnecting, I'm not actually resetting the router itself so the sync itself isn't dropping, only the session, that has no impact on DLM at all.

I've tried Ookla test on both the beta.speedtest.com website and the original speedtest, I get the same results around 10-20Mbps from 5pm - 12pm

I've just done a speedtest now again on TBB, this is what I get consistently from anytime BEFORE 5pm or AFTER midnight. In between 5pm - 12pm the speeds tank down to 10-20Mbps and I start getting packet loss.

Here's the sync from my Billion 8800NL