I switched from ADSL to Fibre in January and speeds were initially good, just over 30 Mbps. However they have been dropping very steadily and smoothly ever since the beginning of March, as these graphs show (data collected from command-line Ookla speedtest script): 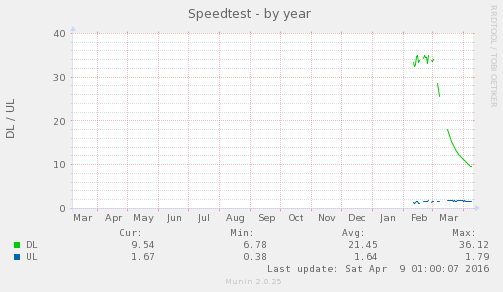 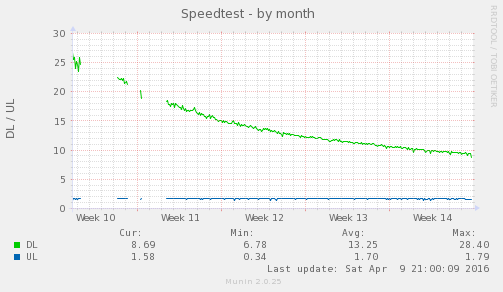 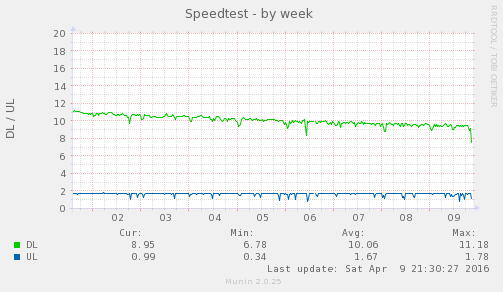 The smoothness of this curve cannot be a coincidence. I have restarted my router to no effect. The line is still synced at 40 Mbps:

I do use the connection fairly heavily, mainly for backups and Dropbox. Is it possible that I'm being throttled in some way, or should I raise a fault? I notice that others members are complaining about speeds dropping over time:

I had a chat with technical support and it seems to be a combination of wireless performance and being throttled by Ookla's speedtest. Thanks for the suggestion

I cant really see anyone without their own fibre being bottlenecked by any of the Ookla based speedtests although its best never to rely on just one site. Ookla based sites I know of are speedtest.net speedtest.xilo.net and mybroadbandspeed.co.uk

For a different perspective there are tests at thinkbroadband.com or dslreports.com You already have tried speedtest.btwholesale.com

Another alternative is to try a large file download (which often shows up congestion better than speedtests) also from thinkbroadband.com/download or the test at speedof.me which seems to give a similar result

I've certainly seen throughput get very bad in the evening and I'm afraid there is still no 'official' comment on this despite a number of threads.

seems you have been fed a bunch of cack speed tests will not bottleneck a connection like that they may not always give the right result but they don't do what the Support rep said.

What you can do firstly is check to make sure your Plusnet Profile is not lower than your BTW IP profile it should be same give or take a couple hundred k,

you can find what yours is here https://portal.plus.net/my.html?action=data_transfer_speed

it will say connection speed and give the figure if it doesn't match the BTW IP profile Someone on the CRT or Live chat can adjust it for you.

>being throttled by Ookla's speedtest

What is that supposed to mean? Sounds like a load of old flannel from Technical Support.

So it gets weirder. The problem is not resolved. I'm not being throttled by Ookla.

But I set up an Iperf server on a hosted server on Linode, and using that I get the same numbers as the command-line speedtest: about 9 Mbps +/- 1. This makes it difficult to automate the test, because I get different results when I do!

I'm working on the theory that something is wrong with my Linux home server that I'm using to run the automated tests, as it produces different results than my Linux laptop, which connects through it. I'm doing some tests with packet captures to see why the two Linux boxes get different performance. This may take a while.

well this sounds like a wireless issue rather than a broadband one.  What speeds do you get if you connect the laptop wired to the router?  Use that as your baseline (do the BT speedtest) to work out whether or not there's any problem with your line.  If it's within the variables given by the IP profile then at least you can exclude your connection as an issue