My first post here and I hope you can help. My broadband has started to drop as soon as it rains. There is no doubt that rainwater is causing the problem. I have a flat corrugated plastic roof on part of my property which amplifies the sound of rainfall, making even a light shower loud enough to hear.

Since this fault started three weeks ago I have also started to get extremely slow speeds of between 1.1Mbps and 3.3Mbps. Previously I've been getting 10.5Mbps and 12.7Mbps (I live in a fairly isolated village in rural Herefordshire) so this (10.5Mbps to 12.7Mbps) is entirely acceptable and adequate for our needs.

I have had one BT engineer here last week. Nice chap. He was completely stumped and after carrying out the most basic line tests was only able to tell me what I already knew i.e. that I had very slow speeds and very frequent drops. He then rang his supervisor for help who told him to do the tests he had already just carried out before hanging up. At that point the engineer told me he is an ex-builder who has become a BT engineer due to a work related injury (...smart move 👍), he has only been doing the job for 6 months and is not experienced or qualified to be working on broadband faults. I paraphrase slightly of course but only slightly 🙂. That's fine, we all have to start somewhere and he got a bit of experience visiting me.

He advised me to re-report the fault as soon as he left, and to request a replacement router, and a broadband engineer visit.

I did this, engineer visit is booked for this coming Thursday. My questions to you are, a] what do I need to do to check that he takes my observation that this fault corresponds with rainfall seriously, and b] how do I ensure the correct inspection and work is carried out to correct this particular kind of fault?

Plusnet have refused to send a router to me (I actually don't think this will help anyway) despite the engineer's advice.

I have had issues with Plusnet broadband previously (ongoing issue of about 18 months which reached resolution last year) and simply can't have this new issue going on that long again. I need them to take the rain = fault seriously and fix this quickly rather than it drag out again.

Any advice much appreciated - thanks! 👍

I'm sorry and disappointed to hear about the issue and also that the first engineer visit wasn't as helpful as it could have been. I do agree that a new router won't make a difference to the issue you've described, however the engineer visiting on Thursday should be making appropriate checks both on the line and the local network as it would seem that there's an issue with wet weather affecting something like an exposed joint in the cabling for the line.

I hope they can get it resolved for you and we'll do our best to check in with you again as soon as we can after the visit has taken place.

Many thanks for the reply Adam.

Likewise, I will update this thread when the engineer has visited.

Hi again Adam,
Openreach engineer Tony visited my property on Thursday 7th November at 08.15.
On arrival he found that my broadband and phone line were completely disconnected.
I explained that since the last Openreach engineer visit (which failed to rectify the continual disconnections and very slow broadband speed) I have noticed that the disconnections are clearly related to rainfall and that this would therefore suggest water ingress. He agreed that this was the likely cause.
Tony set out to find the source of the water causing the fault.
Tony returned at 15.00 with a piece of damaged cable insulation (Here are photos of this damaged cable insulation) which he told me is indicative of damage caused by squirrels. His colleague had removed this piece of cable insulation using a hoist, and they have temporarily patched - but not replaced - the damaged cable. 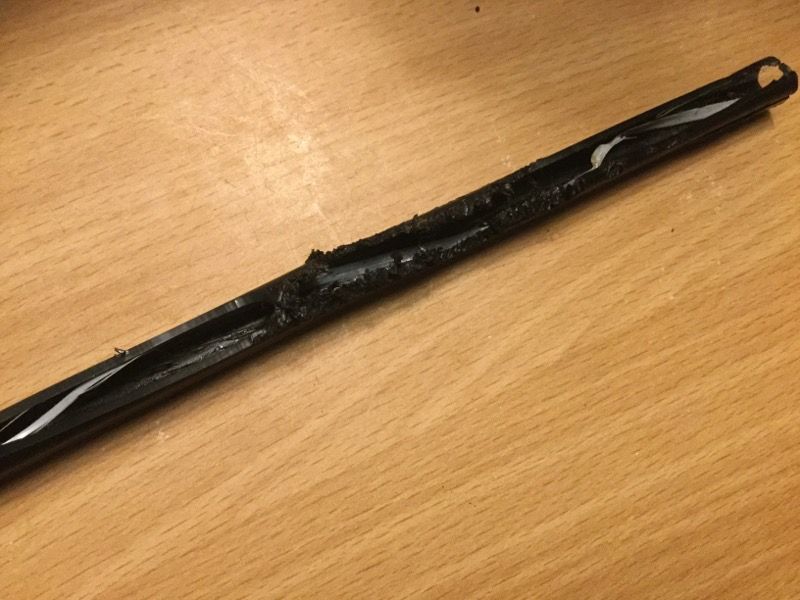 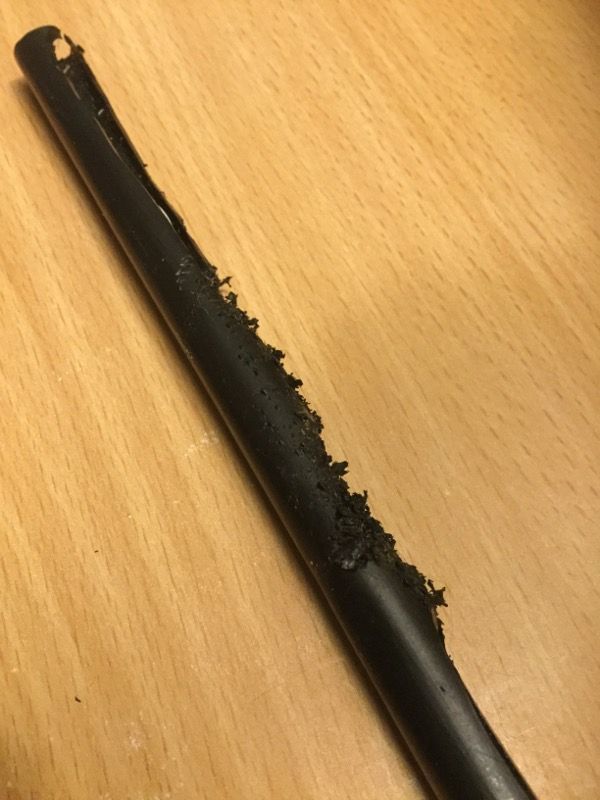 Tony told me that this should fix the problem and my broadband speed should now be closer to the 11.3 Mbps that was currently being sent to the property (Here is a photo of that speed test result from Tony's device). 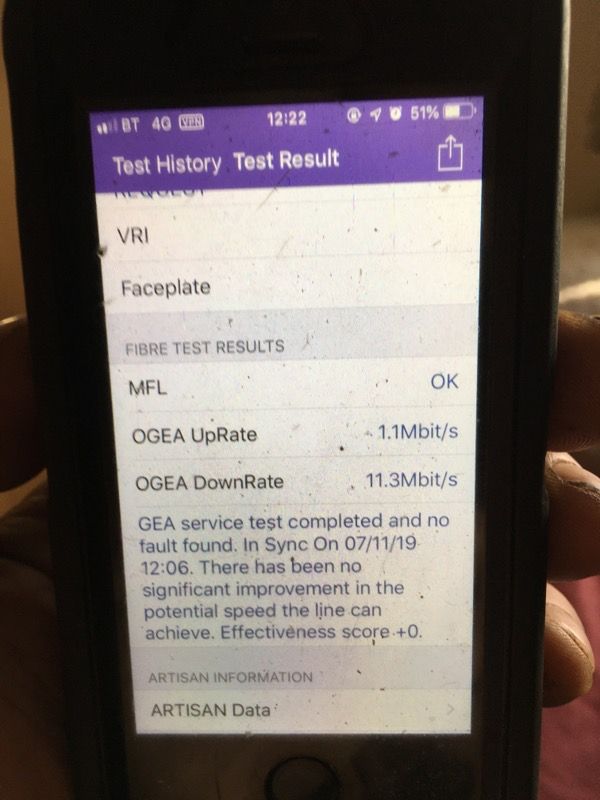 Tony also showed me a history of my broadband speed to the property (Here are photos of the history graph from Tony's device) the unique OGEA number identifies it as being the supply to this property. These graphs show a steady speed of just over 8 Mbps until the start of the recent fault. 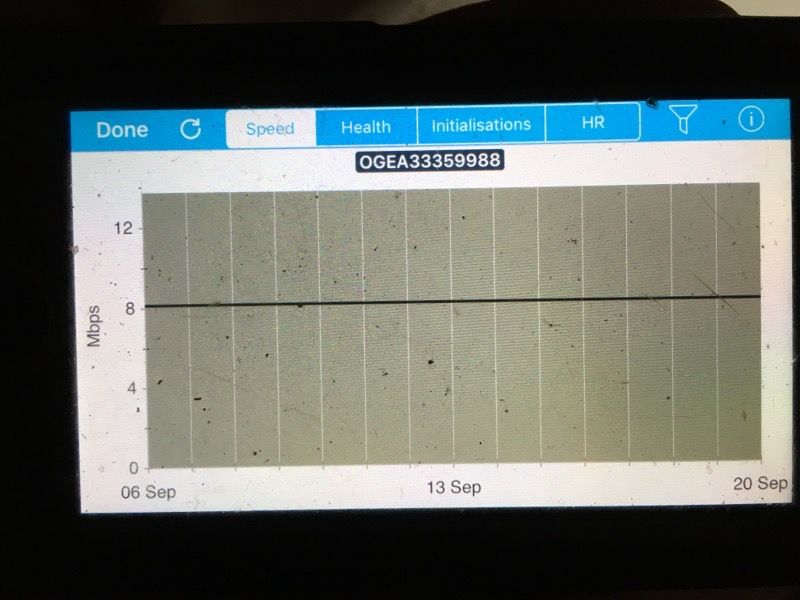 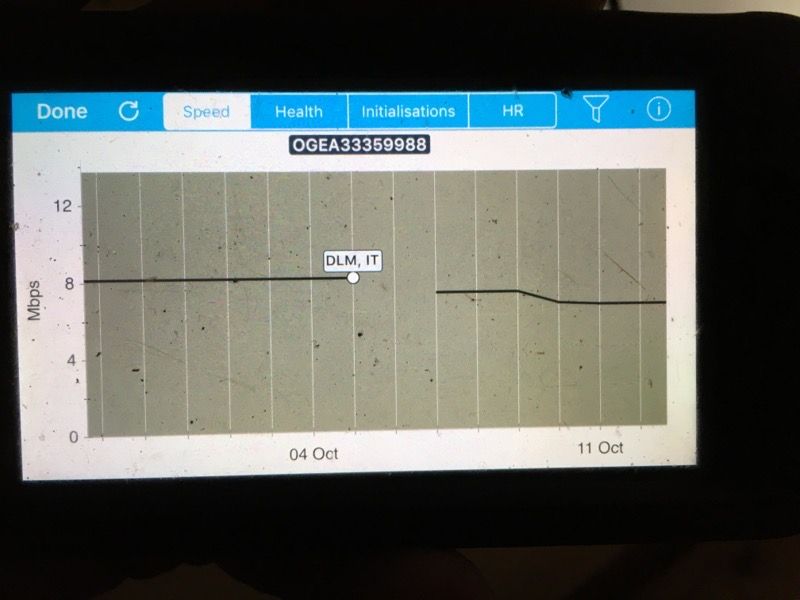 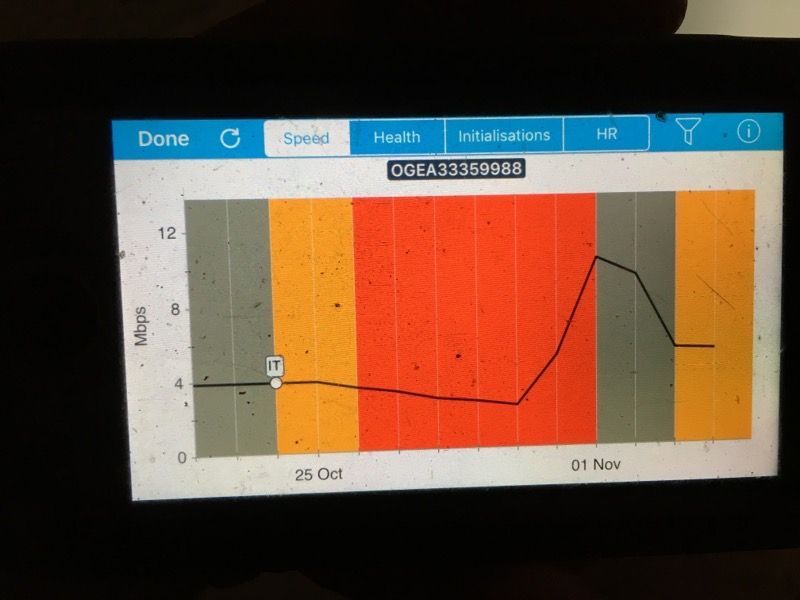 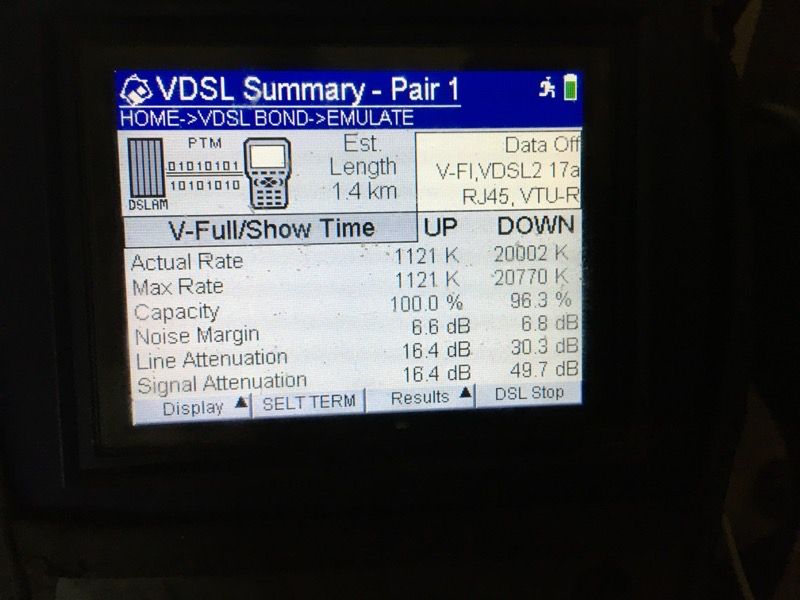 However, despite the damaged cable being patched, I am still only getting speeds of around 3 Mbps. This means that my broadband speed is still verging on being unusable. Therefore I will need you to carry out additional tests or repairs to get the broadband performance (speed and continuity of connection) back to where it was before this most recent fault episode.
Will Smith
Username: wallspool
Tags (12)
Message 4 of 6
(640 Views)
0 Thanks
Highlighted

Here are my broadband speed test results from before and during this recent fault episode:

Right now the broadband is constantly dropping and I have slow speeds again. And yes, it's raining...

I'm sorry to hear that and appreciate that the issue has not improved as much as you would have liked after the engineer visit.

I've had a look at the fault ticket and this was closed by our suppliers who believed the issue was resolved after the engineer visit. In order to escalate this back to them we will need to run through the troubleshooting tests at your end as well as diagnostic speed and integrity tests here.

Please can you run through these checks again and the router must remain connected to the test socket, let me know once you are connected so I can run the diagnostic test and take it from there.

Connect to the test socket: https://community.plus.net/t5/Library/Testing-From-The-Master-Socket/ba-p/1322242