Howdy, as the title says, how do you know if you're IP Profile limited?

Been with PN for about 6 months now, happy with them so far, used to be on Sky where I was sync'd at 62mb although never achieved that on PN, 55mb being the highest

It is a shame BT have only just added in the recent speed check thing into their ADSL Checker tool!

I seem to have sync'd at 45mb in the router stats but when doing speed tests from a wired computer it is around 33mb. So upon checking with BT Wholesale checker (which isn't the most reliable thing) it says my IP profile is 39mb.

So I was wondering if someone could see if a) I am IP profile limited b) post up a GEA test to see if there are any faults? 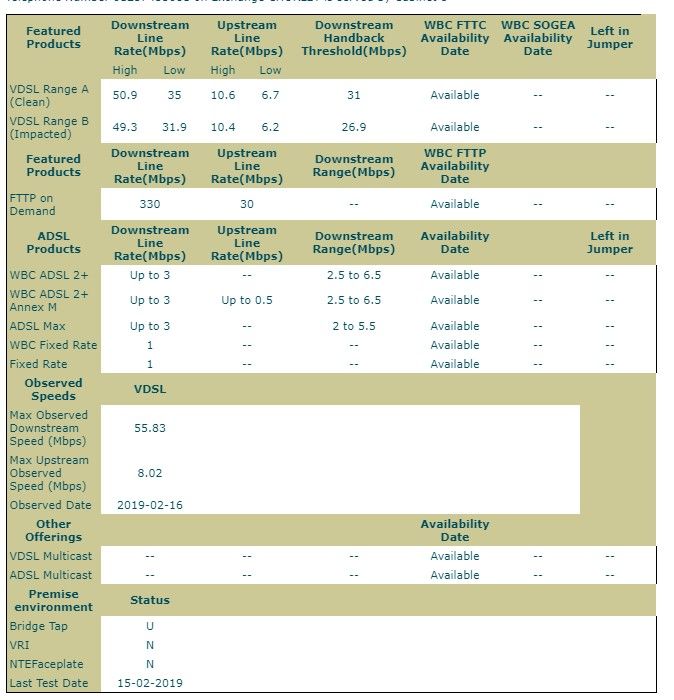 Update : 9pm automated re-sync (which my line never normally does!) My line is stable as a rock normally and only when the BT Hub 6 forces a reboot after 2 weeks is the only time it re-syncs, and even then connects at back at the same speed of 55mb. Granted 9pm is a peak time so more noise etc etc, but as mentioned in the last sentence, my line is usually rock stable @ 55mb on the 3db profile.

Question is, why has my line dropped from 55mb to 42mb in last few days?

Can someone post up what @Jubby has posted up here for someone else but for me, thanks!

I've tested your line and attached the test results below

We can see that the sync speeds are varying quite a bit so I'd recommend raising a fault here and posting back once you've done this.

Thanks for the reply @MatthewWheeler

PS the "min line speed" and est range speed goes out of the window for this because I already sync higher than the max BT seem to think I can sync at. See first post on my original post on migrating :

I did have an issue recently on the Openreach side of things, where I had alot of FEC and CRC errors, so my SNR gradually increased to 8db and speed gradually decreased over about a 4 month perioud, going from 62 to 59 to 52 to 49 and then 43 (and 6mb up) which is at the point I called Sky to raise a fault (on a Monday), who were really good and got an OR engineer out the next day (a Tuesday).

When Openreach rocked up, he did the usual tests, installed a nice new master socket (5C) and fixed the errors by changing something in the cab, returned to find it wasn't any better sync by no errors, did a DLSM reset and also a lift and shift to save OR coming out a second time. When he came back, ran a test via his tool, was synced at 42mb, did another DLSM reset, same speed.

He didn't believe I used to sync at 62mb (for about 2 years!) as his tool was saying the max I could ever get was 45mb (which is what BTs tool says online). I said to him I was on 49mb on the Friday (he was at mine on the Tuesday)

I guess the only thing that has changed from that post 6 months ago is improvements to BT estimate speed tool, now shows a higher max speed (from 45 upped to 50) and the "this customer has previously sync'd at X speed" to help in issues like this!

Ps @MatthewWheeler what does this mean?

I beileve the estimates are updated every now and then based on how the line is performing and how the line has performed in the past.

With regards to the interference observed part of the test I believe this shows on most if not all lines. I'd imagine there's very few homes in the country that don't have some form of interference however as per the test it doesn't appear to be affecting your service.

In terms of the current line profile when your line goes active it's set to the highest profile possible based on which product you've chosen. After a while it should change to match the BT IP Profile

So, the original question, am I IP profile limited?

I see the ticket I’ve raised has had a few updates, escalations and taken off hold, the one that that stands out, “Our tests have found a fault with your broadband service” but the GEA test didn’t show anything? Care to divulge what this issue might be?

A reboot of the router this morning brought the sync speed back up to around what it should be 55-57mb.

But when doing a speed test via Ookla or BT it shows it is still capped at 33-34mb?

My BT IP profile has jumped to 50mb now over night.

I am scratching my head.

I've looked at the fault update via our Suppliers system and it shows;

"Fibre Line Test showing ok, No sign of Radio interference identified however interference at irregular intervals are observed. Regular Interference Observed daily from 00:00 to 23:45 at Customer Premise. Please liaise directly with your customer to identify possible source in home / office environment. If problem persists, please book an SFI via your usual systems"

Basically, it's asking me to double check the home environment with you and asking if you can think of anything which would cause interference?

Basically, it's asking me to double check the home environment with you and asking if you can think of anything which would cause interference?

This is contradicting what @MatthewWheeler said when I asked what it was and put "all homes have it, its not effecting your service".

If it is, then where would it stem from? Where would the interference be effecting the line? At the entry to the house, the master socket, the micro filter, the RJ cable, or the router?

I've made sure there are no electrical wires or extension cables near the micro filter, RJ or router to minimise any interference from day 1, the only thing within 4ft is the TV? The house phone is about 5ft away and always has been.

Some guidance or links to other forum posts with the same issues would be appreciated.

Hi @feeps, thanks for getting back to us.

Put simply, interference can come from just about any electrical appliance and can be affecting just about any piece of the infrastructure. It's really not the easiest thing to narrow down.

I've checked on the ongoing fault and we're now being told that we're going to need to get an engineer to attend your premises.

You'll shortly receive an update on your ongoing fault ticket which we do need a response to. If you can let us know here when you've replied to the ticket we'll be able to progress to booking it in ASAP for you.

Please let us know if you need anything else at all in the meantime.

This morning I moved everything away and unplugged everything from the sockets leaving just the router on its on on the floor plugged in, so nothing electrical was around it, made surethe power wire to the router wasn't wrapped around the RJ11 cable etc, rebooted the router, I might add that since rebooting the other day, been rock stable with the sync at 57mb on 3db profile, anyhow, rebooted the router (gave it a few mins downtime to save the DLM thinking the line was unstable), and sync'd back at 57mb on 3db profile, did a speed test, still 34mb.

Not liking the idea about getting out an engineer and having to pay for it based on the ticket information,let me have a think over the weekend and will get back to you.

Hi @feeps, thanks for confirming that you've done all that.

With regards a charge - it'd only be levied against the account if no fault was found or the issue was found to be caused by your own setup or if there is damage to Openreach infrastructure within the boundary of your property.

I can certainly appreciate your concerns though. If you'd like to update us here and on the ticket when you've made a decision.

The original problem went away eventually where it seemed I was capped at 34mb even though I was sync'd higher but I was just wondering if I could get a new GEA test to make sure all was okay.

Since posting in Feb, my upload speed has gradually decreased and went to below 6mb the other day, a reboot brought it back up to 6.3mb. I was on 8mb upload back in Feb, 2mb doesn't sound like a right lot but it is the pattern of the gradual decrease overtime that is making me scratch my head.

Only had a few resyncs in the past month, the rest have been me trying to reboot the router early hours to sync at a faster rate, I was at 62mb a few weeks ago (wish I screen capped the bt dsl checker saying this too) but now down to around 52-55.

Cheers for getting back to us,

Here's a copy of our testing:

Looks like your speeds have improved and you're now on a 3dB profile. Your upload speeds while on the lower side of your line estimates, they're within expectations still.

I wouldn't really worry about the interference the test is seeing unless you're experiencing problems with your service. The response we got from our suppliers was just a standard/stock one based on the results of the test.

Your connection also looks to be stable:

Probably worth just keeping an eye on things and hopefully your speeds go in the upward motion, but let us know if you notice your speeds drop below where we'd expect and we'll be happy to look to arrange an engineer to investigate further.