Same here, two Samsung S7s. Neither will connect through Plusnet Broadband, both are OK through their phone networks, Three and Plusnet Mobile.

I don't see why this has been changed to an Android problem by the moderators as it's only Samsung's that are having the problem with updates!
My Lenovo tablet updates as it should.
Yet the three Samsung's in my house still don't update.
Message 32 of 57
(799 Views)
Reply
0 Thanks
Highlighted

We're still investigating the issue and we'll update you all when we know more.

Apologies for the inconvenience this causes.

I suspect it isn't the Samsung or whatever, it's what you are trying to do over WiFi.  I say this as I just got my mobile sim and tried to update my laptop and got the same " failure " message as everyone else.  Connecting my laptop via ethernet works just fine.

As I mentioned, I have no problem. I think my earler post re the Frija PC downloaded wasn't helpful, so I installed a network trace app on my Galaxy S9+ and this is what it sees when I run Settings / Software Update: 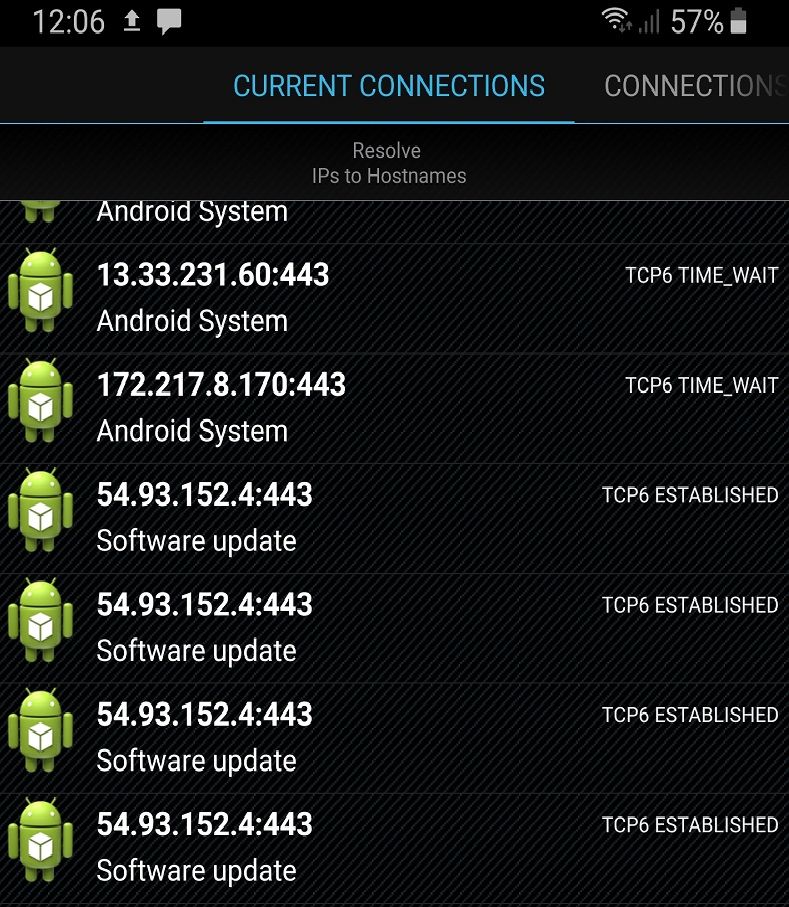 I too have this issue and have spent days trying to isolate what's causing it.  We have a Galaxy A40, S10e, Tab A6 and 3 x Galaxy A5 2017's in the house.  All are afflicted with the problem.

I have tried the following with no success:

2. Changed the router to a generic VDSL router

I have tried the following with success:

1. Initiated a VPN from the phones and tablets bypassing the Plusnet network

3. Ran software update over non-plusnet broadband WiFi in other locations

I also contacted Samsung to try to get a list of all URLs used by the update feature but their 2-3 day estimate of passing that info to me has passed without them providing it.  My plan was to test access to them then pass to Plusnet in a support case.

I ran a packet capture on one device and the URLs I saw were:

A fix would be greatly appreciated as it certainly worked up until a few weeks ago.

My Samsung S10+ has just this moment asked me to do a security update.

Good job I'm sat at work on our wifi here otherwise my phones security would be out of date!

Any updates on how this is progressing???

I just did a reboot on my router which obtained a new ip address of 31.125.xx.xx (normally got 146.199.xxx.xxx on reboot) and now all Samsung devices working on 'check for updates'

How many people with this issue have a static IP address? I do.
Message 40 of 57
(527 Views)
Reply
0 Thanks
Highlighted

Definitely seems to be an IP related problem.

Doesn't seem too conclusive. My static IP is on the 195.166.157.x subnet and I can't access Samsung updates. I tried someone else's Plusnet WiFi/broadband that's on a dynamic IP and it worked.
Message 42 of 57
(514 Views)
Reply
0 Thanks
Highlighted

But that's two of us on a 146. IP address who had the problem - now my ip address has changed its fine - as I said earlier it could be ip address problems as works fine with some ip addresses! 🤔
Message 43 of 57
(494 Views)
Reply
0 Thanks
Highlighted

I've just tested mine and it's now working.
I have not done any reboots or anything special.
Maybe it's sorted now?
Fingers crossed
Message 44 of 57
(488 Views)
Reply
0 Thanks
Highlighted

Nope. Dynamic ip and using 146 range, not connecting. Can't seem to get off the 146 range.