I'm on a Force9 Broadband Premier Option 1 (Annual Contract, No Modem) contract and have a website on the CGI platform that generates roughly 125 to 155MBytes per day traffic according to PlusNet webstats, and prior to the 3-4 service outage and transfer to the new CGI server has been running fine and at about half the 250MBytes bandwidth usage limit. On 18/Mar the usage according to PlusNet webstats was 150,787 kBytes, within expected range and slightly below previous peaks on the old platform in the same month, and well within the (previous) 250MByte bandwidth limit.
However, the PlusNet have send me an email saying that on 18/Mar the site used 27,784 KB over its bandwidth transfer allowance and threatening to remove the site if the bandwidth usage is not reduced!!
Has PlusNet cut the bandwidth allowance by more than half on the new CGI to around 123kBytes (from 250MBytes)?
Update: Here's the stats, last column is 18/Mar

Update: 3:20pm Fri, Ticket in MyQuestions, ID: 3257067, 4:06am, Friday 19th March 2010
Message = "Customer was warned (their webspace is currently 27784KB over the allowed usage)."
It's not overly clear what this actuallty means, as appears it could possibly relate to filespace rather than bandwidth? Although I can't see how additional filespace would have been consumed in transfering to the new CGI.
Update: 5:52pm Fri
Here's the text of Force9 email, clearly this relates to website bandwidth allowance:

I'm not sure why you would have got that message, we've not changed anything to do with the limits on CGI bandwith, that's looked after by a separate platform.
Message 2 of 4
(205 Views)
0 Thanks

Thanks Ben.
I'm naturally worried that on the new CGI platform the normal usage of my site has triggered a bandwidth infringement message and a second one will presumably take the site down - this is something I clearly want to avoid.
The usage on 18/Mar, after the site came back on the new CGI platform, was LOWER than has occured previously in March (see webstats) on the old CGI platform, and the only thing that has changed is the platform. A second worry is that the allowed usage seems to have been cut by half, which if true, would amount to a severe unanounced restriction.
Daily Stats, righthand column, 150,787 is apparently 27,784 OVER the allowed bandwidth limit (which would make it only about 123MB and much lower than the 250MB previously.) 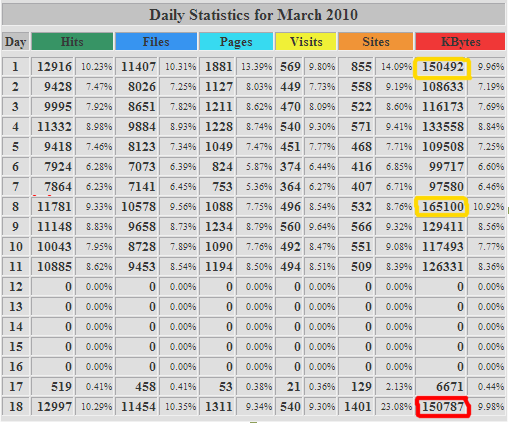 Hmmm, TBH I didn't think those system notices were generated for the CGI platform. Is there a possibility that it's related to the normal Homepages web servers?