@MisterW  I think you have it

as to why they would do that, I've no idea.

In my last home, they had rewired using black rubber hosepipe as conduit! Why indeed

. It took me ages to find out what all the black dust was!

I was asked for a photo of the inside of the small in/out junction box, where the black cable meets the white,  so I'm adding that now....is that all OK? 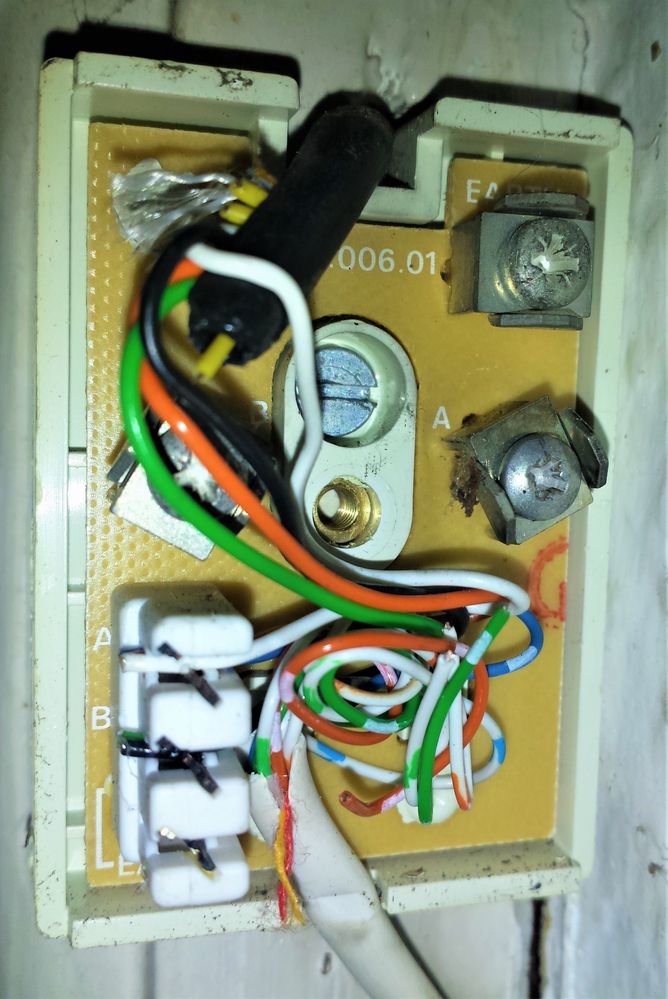 
...Anyway, do you normally plug the router into the master socket ? If you do, then I'd suggest replacing the whole kit and kaboodle with a NTE5C and Mk4 filtered faceplate.

No I don't normally use the master socket, its't just a bypass to an extension.

@Leapy well whoever did the wiring seems to have a complete aversion to screw terminals🙄 It couldn't possibly have been done by an, even bad, BT engineer.

In that junction box , the incoming wire is MEANT to be connected to the A & B screw terminals and only the outgoing one to the IDC connector!!. Logically it's wired correctly, although you may not be getting a very good connection as the (black covered) wire used for the incoming line is not designed for IDC connectors.

However, I wouldn't go disturbing anything in there!

I honestly think you need to get a BT engineer in to sort the mess out. If your speeds aren't meeting the minimum gauranteed from your estimate then raise a fault. PN should get BT in to fix, although it may take some time in the current circumstances.

However , the engineer is likely to replace the master socket with a filtered one, which means your router will need to be plugged in there. Hence my earlier question ?

It looks like it is an old Telewest socket that has been rerouted to our Suppliers services.

Together with our network partners at Openreach we are prioritising customers who don’t have a phone line or broadband connection, meaning there might be a delay in Speed Faults being fixed. In the meantime, please raise your speed fault online at faults.plus.net.

@MisterW Thanks😀 it's some form of cold-comfort to think it has been done by a lazy, but competent BT person and not a total cowboy.

Thankfully it's all working, to a fashion, so I'm reluctant to mess with anything and hope, one day an Engineer will fix the problem or someone will throw a switch and I will be flying.

@tinytaco this discovery, of the problem, was only due to raising a fault and being asked to do a test, using the test socket....hence my amazement at not having one to test!

Ironically, my speeds were better 11 months ago, when I was just on fibre and not fibre Extra as Extra, seems to mean less for more. Maybe I just need a reset, if such a thing exists?

There is obviously a lot of money to be made from corporate branding: https://www.theguardian.com/business/2019/may/16/bt-unveils-new-logo-to-match-transformation-to-nati...

Just to update you on the last 3 weeks of challenges😉

Openreach came and replaced the Master socket and tested the line as OK and capable of getting what I'm paying for which is Fibre Extra.

He informed me that there is fibre to the pole outside and the only copper is the bit from the pole to me (and what I have indoors).

He told me that BT provide 100mbps, 300mbps and 900mbps in my street if I ever need it and several people already have it.

So, I moved the router to the Master Socket and disconnected all extensions to get rid of any risk of star-wiring.

The outcome was that the speeds up and down was almost unchanged.🤔

So back to Plusnet and looking at other possibilities for the lacklustre performance.

The Plusnet Engineer suggested part of the problem might be my Plus One hub router as it's old and the last update was 18 months ago.

The firmware was updated and it was no better.  Plusnet would not give me a new router, but would allow me to buy one for £99.99p.

Still the Plusnet  Engineer old me my line is "at its limit".  This is at odds with above (BT offer their 900mbs FFTTP in my street) and it's fibre to the top of the pole outside.)

Maybe it just needs a reboot or resetting as for a few days (August 2019) while being switched from Fibre to Fibre Extra it did go up to 66mbs down and 15mbs up, but since then it's been very poor?

Who knows, one day my up speed may be in double digits and as high as 10mbps again

On the Plusnet One hub, Thursday

On the BT hub6 Friday

@Leapy You don't really get it do you? The FTTP service with the fibre on the pole outside will do nothing to increase your speeds because it is completely separate to your FTTC service which is still fed from the cabinet through your existing copper phone line. You will only be able to get the faster speeds by leaving Plusnet because they don't offer FTTP now and will not say if they will in the future. BT and some other ISPs will supply FTTP and you can also get lower speed versions of FTTP with 80/20 or 40/10 at reasonable prices. If it was available to me I would go for it no question asked, speeds would be stable at the contracted level, a more reliable service and the option to go for much higher speeds if required. No more speed reductions, resyncs and dropouts that affect FTTC and ADSL lines.