I have a legacy Globalnet e-mail address. About three weeks ago no new e-mails were being received although I could still send e-mails! No error messages are being generated using webmail interface.

Reported this to PN on Monday 30th April, was told it would take between 24 and 72 hours to resolve.

No fix by 3rd May. Rang again, new ticket created was then told it would take up to five days to resolve form 3rd May. Was then asked the same questions through the new ticket that I had answered on the phone to both technical reps. It appears e-mails are dealt with by a different department from ordinary technical queries who according to the response on the ticket "Unfortunately we work out of normal hours and therefore cannot speak to the agent you spoke to to clarify this."

It is now 11th May with no sign of a fix. What can I do to get this resolved?

I'm sorry to hear of the issues you're having with your e-mails.

I've raised a task with the appropriate team now to investigate.

We should have an update within 3 working days.

Thank you for your assistance.

Despite first reporting this on 30th April - all I am told is that the problem is being reported or escalated no meaningful response from PN nor the update promised.

What do I have to do to get this issue resolved?

Still no update. Plenty of apologies but no action!

The legacy e-mail was the only reason for staying with PN, considering other options.

Posted in the Feedback thread about poor customer service - thread locked and referred back to this thread. So I will post my response to a question by BobPullen here as well.

If you have a problem with a legacy e-mail address provided through PN don't expect any action to resolve same.

Many apologies but no action. Only a small team looking after legacy e-mail issues apparently and if your problem does not affect anyone else - too bad your problem is unlikely to be dealt with given the "service" I have received.

It seems to me that they want to get people to move away from them so that they don't have to support them anymore.

For me it is given me cause to consider moving away from PN.

What exactly is the problem, perhaps somebody here can help?

As I posted in the e-mail part of the forum, I stopped being able to receive e-mails on my legacy Globalnet e-mail account but I can still send e-mails. No error message is being reported through either Webmail or MS Outlook 2007 which I normally use to access my e-mails.

I reported the matter on 30th April and since then no action has been taken to rectify the problem other than to refresh the account which did not fix it. The "specialist" e-mail team kept coming back with questions I had already answered to the operators I spoke to on the phone. I wasn't able to speak to the e-mail team as I was told they "work outside normal hours". I was promised a "response" not a fix when I posted on here on Saturday last, but have heard nothing further despite speaking to a manager, who although most apologetic frankly admitted that my problem was not a priority.

The current open ticket on Madasafish is 173831626. The original ticket was closed without the natter being resolved.

Thread locked in favour of the established thread in Email.

So is anyone going to help to get the problem resolved?

@FrustratedUser, I've made some back-end changes to your account. I'm not confident it will have helped but do let me know if it has.

Emails sent to your address are definitely being accepted by our email platform, so the question is, where are they going from there

Before we migrated to the Plusnet Webmail environment, did you have any filters configured or Safe Mode enabled?

How would you feel about me resetting your password so I can access your mailbox etc. and try and work out what's going on?

Thank you for taking an interest.

No safe mode or filters applied. Been running since PN took over Madasafish without any issue.

Was promised a response to this ticket within three days on 12rh May - heard nothing since, other than via questions on this forum.

At least Bob confirmed my e-mails were being received by the PN servers but wasn't able to discover where they were going thereafter, this was more than I have ever received through the ticket where there has been no update since 12th May.

Is this what PN calls customer service?

Am I going to have to go tot he trouble of resetting all my accounts that use this e-mail address. If it can't be fixed or if you haven't the time to sort out an individual problem tell me and I can then make other arrangements rather than keeping me waiting in anticipation of some action.

I'll take another look when I get to the office. Sorry to hear little progress has been made on the ticket

Edit: After changing the mailbox password, I'm unable to identify a problem

I have just sent a test email to the Globalnet address as follows:

And upon logging into Webmail, it's sat their waiting for me: 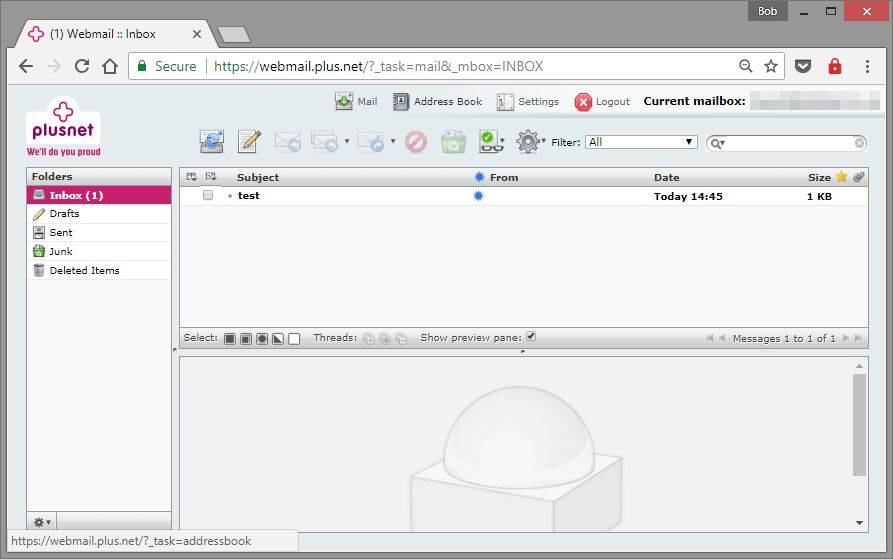 I can also see the message when logging in using POP3:

I'll drop you a private message about gaining access to your mailbox as you'll be completely locked out at the moment due to my testing...

Turns out one of our engineers was poking around at the same time as me.

Safemail was enabled in the back-end database which means all of your email was being dropped.

It's been switched off now, and as evidenced by my testing, everything should be working again.

Apologies it took so long to get to this point.

Thanks for your assistance.

Can you explain how "Safemail" was enabled so that I can prevent it happening again or is this something which happened within the servers over which I have no control?

Safemail could only be activated when the old Madasafish Webmail platform was in operation. It depended on you having address book entries for the contacts you want to receive email from.
If you definitely didn't enable that feature, then I'm not 100% sure what's happened. Sorry.
Regarding the password, I'll take a look at that when I'm back in, but it won't be until later in the week as I'm over in Birmingham at an expo for the next couple of days.
Edit: just a thought, but make sure you're entering the Globalnet email address when requesting the password reset.

Wasn't aware there was such a feature so never activated it.

I did notice that another user had similar issues on 6th April - they also did not receive the reset e-mail.

Happy to wait until you return.

Don't know if you're back.

In these circumstances how can I reset the password?