IMAP What is stored on the server etc

IMAP What is stored on the server etc

I use POP3 but have various devices iMac, iPad and iPhone.  If I switch to IMAP I understand it will keep the inbox, draft and sent mailboxes synchronised and retain the emails on the server which is good.  What I am not sure about is the other mailboxes which I keep on my iMac.  These contain 1000's of emails and total 2 or 3Gb and I am not sure I want them duplicated across my mobile devices.

Can anyone tell me my options please?

@ObserverinMon - Welcome to the Forums. Well if my understanding is correct and when you say 'mailboxes' you actually mean folders and do not exist on the IMAP server they will not be duplicated across clients, unless you manually set this via your email client.

Hi Thanks for that.  Yes in PC terms folders but for some reason Mac Mail calls them mailboxes.

Ok so sounds as thought I can switch to IMAP and keep my my various inboxes and sent mail synced and simply delete or save (file) the sent and received mail in my iMac mail folders.  Thanks.

Just so that you are clear here.  With POP3 everything is on your PC in folders.

A mailbox is a mailbox.  You might have several different mail boxes on your PC each with its own set of folders.

To do what you are considering, you need to proceed with care.  To work properly with IMAP you need to disable the POP3 connection to the mail server WITHOUT deleting the mailbox / account on the PC as that is the container for the local folders.

When you configure your IMAP email clients, make sure you also map Sent, Draft and Deleted folders to the server.  That will ensure that wherever you send an item from, it is visible on all devices.  Also if you start an email in one place, you will be able to finish on any device connected the the mailbox.

I added new IMAP email accounts having saved the inbox and sent mail contents of my Mac.  The Mac worked and I copied an email from saved to inbox and it appeared on the server (webmail).  So I copied all saved inbox and all emails appeared on the server. I then setup my iPhone and iPad to IMAP. All worked with the server inbox being downloaded to each.  Everything was in sync on inbox.  tried copying the saved sent emails and it wouldn't copy them to my Mac sent folder not upload them to the server.  The account details for each folder show the correct email accounts and the structure of folder i.e. inbox, spam, trash, drafts and sent is the same on all devices and the server..

I then tried sending emails which went fine and appeared on all devices but they didn't appear in the sent mail folders anywhere.  Also the content of my inbox suddenly disappeared off my Mac but are still on the server, iPad and iPhone.

So two weird problems.  Anyone any ideas?.

If you have not "mapped" the sent, draft and deleted folders on each device to the server folders, they will only be on the device which you sent, drafted or deleted the item on.

Hi, Ref syncing folders; the server, iMac,iPad and iPhone all seem to have the same folder structure and contain the same emails.  To check this I added a new folder to the plusnet server (webmail) and that appeared on all devices.

This morning I replied to three emails from a mate and none of these appeared in my sent folder.

What could be wrong?

I suspect that you have not 'mapped' the sent items t the IMAP servers sent folder.

I cannot offer precise guidance on configuring iMac, but I guess it's not too dissimilar to iPad or iPhone. 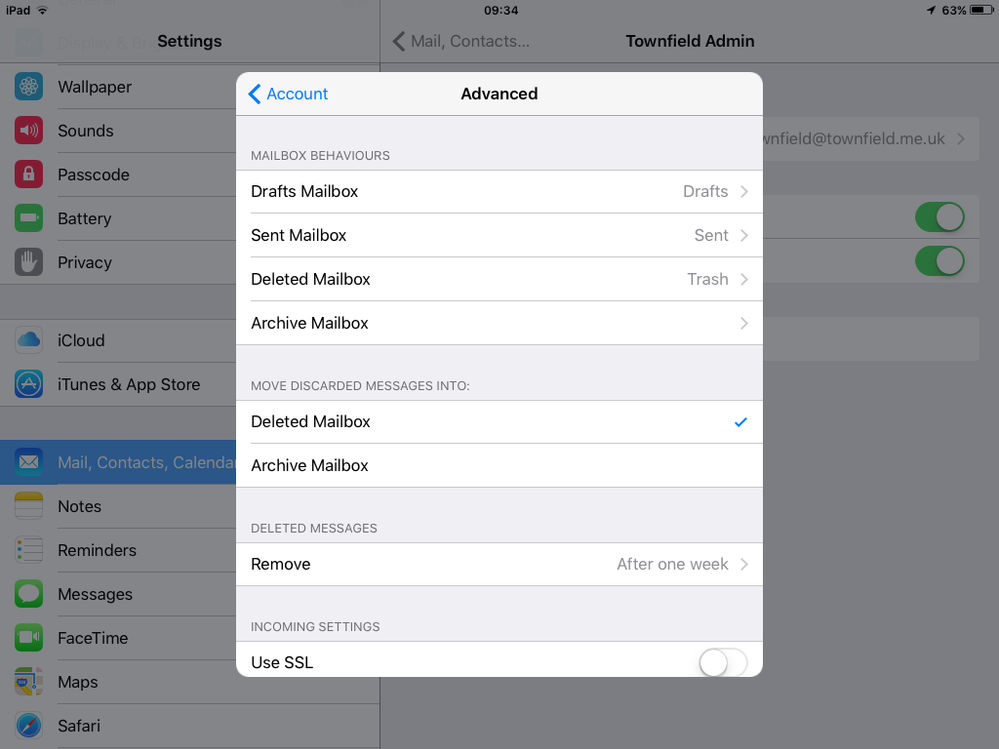 For each of the mailbox behaviours in turn, select 'use the server folder' option. 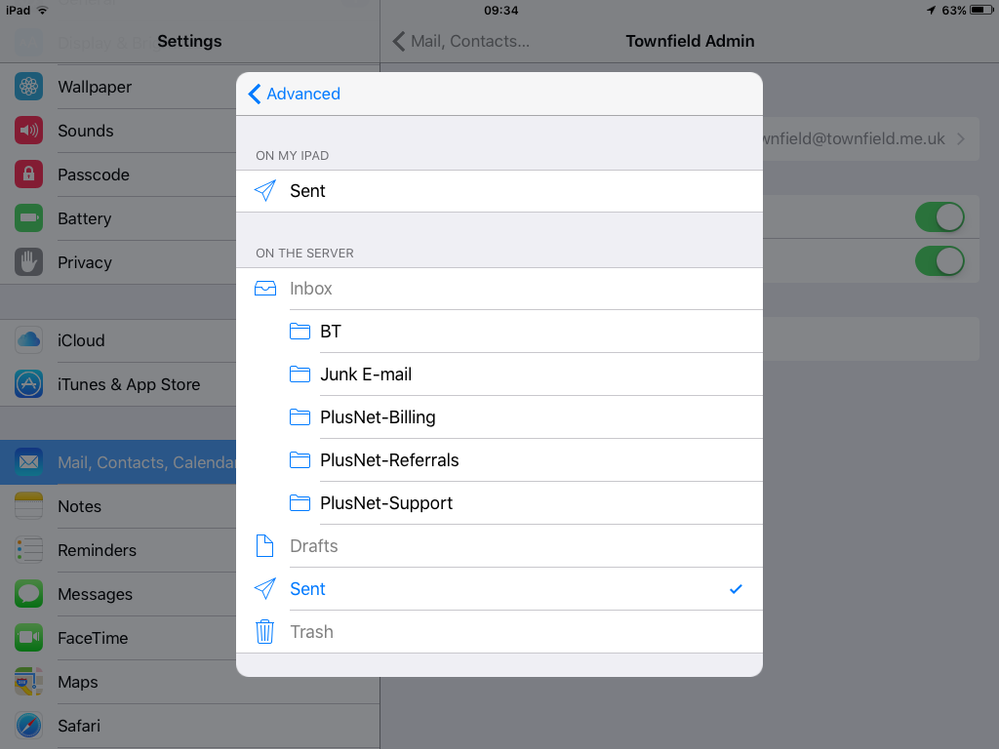 Hi  First thanks for your help.

Let just stay with the iMac for now.  I had already checked the "behaviours" on the iMac mail a/c and all were set appropriately and the actual folders all seemed the same.  Anything arriving at the plusnet server would be sent to the iMac inbox and Mail would save (on my iMac and the plusnet server) a New sent email but not a Reply.

I have reverted to POP3 for now.  I see other people have had problems using the plusnet SMTP outgoing server with imap.plus.net incoming and am wondering if this is a plusnet or perhaps a Mac Mail problem?

Whatever problems people are having configuring their email clients, this is not a PlusNET problem.

i have 2x iPads, 1x iPhone and 1x MS Outlook devices all accessing the same mailboxes - that's not just one, but around 6 PlusNET mailboxes, all without issue.

Note that IMAP connectivity to the inbound server is quite distinct from SMPT outbound which is the same for both IMAP and POP3 receipt.

Some email clients are somewhat deficient in properly implementing IMAP folder support.  IPad and IPhone I have found to be (on the whole) particularly good.  One can properly map all folders to the server.  As I said, I cannot speak for iMac though I am aware that of recent times, Apple have made it difficult to connect to mail servers without SSL, but that does not seem to be the problem here.

Personally I'd get this working within the known space - iPad and iPhone and then sort out the iMac.  That way you can at least see it working in the way I know it works and you can then focus of the problem area where it does not.

If I understand what you are saying correctly I can have my Mac using POP3 and my iPhone and iPad using iMap.  If thats correct I will have a go and see what difference that makes.  If that works I will have another look at using the imap server on my Mac.

Thanks and more anon.

You could do anything you wanted, but that's not the same as me recommending it!

Personally in these days of using multiple devices connected to the same email box, I would not go anywhere near POP3 - with or wothout keep,on server set to whatever duration.

Under default settings POP3 removes all inbound email from the server.  POP3 only stores sent items locally, as does IMAP if not configured correctly.  Consequently when you send an item, it is only stored locally and when you want to recall what you have sent, you need to remember which device it was on.

My recommendation is to sort out the IMAP issue on each device in turn.  Start with what works and fix what does not afterwards.  That will give you confidence in what does work and where to focus your efforts for a fix.

I configured iPhone and iPad for imap leaving the mac as pop3.  All worked fine with sent emails in the right folder on the server and devices.  Pop3 on the mac worked fine but obviously it didn't pick up the sent stuff from iPad or phone.  I configured the folders so that all were saved to server.  Folders all matched. If I sent anything from the mobiles it appears in their sent folders and on the server as one would expect.

Then I reconfigured the Mac using the same settings as the mobiles and started the imap account.  It created a second "sent" folder leaving the original intact and also a spam and trash folder and it downloaded the sent email folder contents but only to the new sent folder.  I then sent a new email from the mac and this worked arriving on Mac and mobile devices and unlike the  last attempt the email was saved in the original sent folder but not in the new sent folder.  I also tried replying to an email which worked but same as New, the reply went into the old sent folder.  I cannot seem to merge the sent folders.  So I now have two different places for sent items which is a pain in the proverbial.  I then checked the iPad/phone and they had acquired the same folder config as the mac which I presume is auto for imap.  I checked the Mac folder "behaviours" and they are all set to save on the server.

So I am almost there but just have this frustrating problem of two sent folders all devices.  Any ideas on how I can merge these?

As I said above, some client IMAP implementations are a bit messy.  Some (like the iPad & iPhone) look to see what is already there and ask which you want to use.  Others (apparently like the iMac) make their own mind up and create something new!

There are two common 'standards' for the name of the sent folder; either (simply) 'Sent' or 'Sent Items'.  At this stage it would be worth while seeing which folder Webmail is using for its sent items.

When all devices are seen to be working with the same folder, simply move the items in the other folder to the one which works and get on with enjoying it all.  Depending on which folder is chosen, the other one might be capable of being deleted if it is not the "system" sent folder.

Hi Again  Fiddled with a few things on the server and mac folders and it all seems to be owing with just one sent folder.  No absolutely sure how that happened but a result is a result.  Now when I have summoned the courage I will start on the Mrs's email accounts!

Thanks very much for your help.