Email no longer working on iPad

Email no longer working on iPad

Problems started on Friday when couldn't get emails and got error message 'imap.plus.net' not responding.

After long help assist chat was told it was an ipad problem and referred to Apple. All other mail boxes work ok on ipad though.

Evntaully deleted and reinstalled accounts and hey presto it worked.

I am I alone with this problem? Any suggestions? It has worked happily for years before now!

You're not alone,been having problems with email for weeks.Thought PN had cured the problem last week,as things were OK and speed was back to it's usual fast self.Spoke to soon .Slow email connection once again


Eventually deleted and reinstalled accounts and hey presto it worked.

Yes, iPads can get their nicker elastic completely twisted with email account set ups and some times the only way to fix them is to delete the email account from them.  As much detail as the iPad chooses not to disclose is always helpful.

At the moment I am seeing a general slowness of emails on my PC and occasionally on my iPad.  I cannot tell if this is a connectivity issue or a responsiveness issue with the PN email servers.  I am also seeing similar issues with another's email server ... which I know to be encountering performance issues due to the volume of spam email circulating the globe.

Update - apparently when I deleted and added the accounts back in I did something which now means it works fine - as long as I am sitting at home next to my plusnet router!!

Rather defeats the object of using the ipad although it is heaps quicker than using webmail direct which now loads at such a slow pace I need to start it then make a coffee while it thinks about it. This is why using the iPad is my preferred way of accessing my emails

Your description here could indicate other issues.

Rather sounds like you might have a Wi-Fi issue.  Can you other wise use the iPad for internet browsing when not next to you router?

Or do you mean that (in some way or another) you cannot SEND emails when not at home using your iPad?  That would point to a different problem.

A slow internet connection can give the impression of email not working on an iPad (something which I suspect can lead to a messed up email account on an iPad).

It not working at all and it working slowly point to very different issues.

All Internet and emails working fine and fast - just not the plusnet email.

since the delete and re add of the account it only works when at home eg I can draft an email when have ipad anywhere but it won't go until I'm back at home.

Hope that makes it clearer-

I would suspect that's because when not at home, you are off the PlusNET network and are being prohibited from accessing the SMTP server (relay.plus.net).

Go to the email settings for the PlusNET account, look at the SMTP server details and make sure your username and password are there.  Also use port 587 rather than port 25. 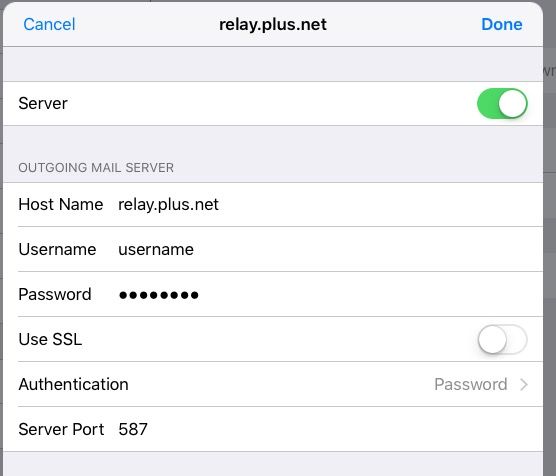 My iPad generally 'gives up' more quickly than my PC (or even my iPhone) so when PlusNet's server is slow, as it often has been lately, the iPad reports a server connection error. Not really a bug with the iPad, just it's email timeout kicking in.Of course when the server gets even slower eventually all clients fail to connect. The PN server often slows to a crawl then speeds back up again, it just seems to be not up to the job.

the only real fix is for PN to get their server speed back up to an acceptable level.

Though this thread mentioned time outs as a background issue, this thread is essentially about difficulties with sending emails, which is quite a different matter.

PlusNet email servers are not alone in (at times) having performance issues.  Other email services I use much more frequently report time outs or disconnections.  I rather suspect that this is down to dealing with the massive volume of spam email being received.  One email provider has suggested that they need to double their email server farm every 18 months - that's a massive expense.

The solution worked for a week or so but now back to original problem - even at home.

i have not made any further changes to settings, all I have done is use email.

all I get is "imap.plus.net not responding" message.

I think we need a wee bit of clarification here.  Your original problem appeared to be about SENDING email, where as "imap.plus.net not responding" is about RECEIVING emails.  Whilst I appreciate they are much the same to you "My email is not working", it is important to discern the difference so that you can be given the correct advice, because technically they are very different.  Answering the following questions would be helpful.

Are both email accounts PlusNet accounts?

Is it the case that - at the same time in the same place - one works and the other does not?

Is it always the same one which fails?

Does the one which fails the most have a lot of emails in it?

When the problem happens, is other Internet activity (web browsing) also slow?

Do you also have a computer and does that access the same email addresses?

If yes, does it see the same problems?

There is some possibility that this could be a WiFi or line speed issue ... hence the battery of questions!

Originally I did not seem to be able to send emails any longer from my iPad. I may have been confused because, as I always send a copy to myself, not receiving that copy made it look as though the one I had sent had not gone. I can now see that the error message might have pertained to the copy email that was trying to get in not the one that was going out!

This is certainly the case now as I can send to people (or so they tell me!) but not receive replies.

I have my original plus net account (used for billing info etc) and another I use for social. The latter is the problem one. I can send from the problem one TO the original and receive that fine on my iPad. So receiving looks to be only a problem on the social one.

Probably the failing one does have a lot of emails in it. Although I don't send and receive a huge volume of emails I have never figured out how to delete emails directly from the iPad - the message I received when I tried seemed to suggest that it was not possible. I will access from the laptop and tackle that one asap!

All other internet activity absolutely fine when problem happens - nothing slow, nothing else inaccessible.

Yes - I have the laptop (MacbookPro)…which is where I am now and the reason I was able to see the email notifying me of your reply otherwise I would have no idea there were new emails.

And, therefore, no - it does not have the same problem…..but I want to be able to access my emails when I am away without the laptop as I have done for the past three or four years.

And.. just to recap … the problem was resolved last month when I deleted the account and re added it with a little bit of help from your wonderful self. When I first re added it it would only work while on home router but following your suggestions I got it working wherever I was. It was then working fine until today when the error message returned. I had done nothing to the account other than successfully sending and receiving a few emails in between time.

Thanks - hope these responses help to hone in on the problem. Anything else you need to ask just fire away!