Having tried several different avenues to try and resolve the problem I've got, without any luck,  I'm now trying this board to see if that changes. The problem I'm having, relates to emails being returned to sender (so to speak) due to my account being, as it says in the title, over quota.

I've had the same email account for years. Originally, it was through freenetname, then madasafish and now, plusnet. Over all the years I've had this account (which must be getting on for 17/18), the most problems I've had, have been since the switch to using plusnet's webmail service.

In the past, when I've been aware of going over my quota, I've just logged in to my webmail account and deleted a few old emails and things have been back to normal. For some reason, I've tried this route recently, using plusnet's webmail, and it hasn't worked. In the past, with madasafish, I could easily see how much needed to be deleted to get my account back up and running. With Plusnet, it far more trickier. Even checking the size of every folder and deleting every email I can see, emails are still be rejected, with the response (from using a gmail account of)

452 [my email address] is over quota: try again later.

Even after emptying every folder I can see, including spam and trash, within a day or so, emails are back to being rejected. When I log to clear the emails I've received, there should be no way, given the numbers/size of emails involved, that my account should be deemed as going over quota.

Given how important emails are these days, I'd be extremely grateful if somebody can tell me how to clear this problem.

Email account over quota, without any emails, visibly, being stored on plusnet's servers....

This behaviour seems a little odd to me as that's not what usually happens when you go over the limit with PlusNet email.
What you would expect to see is first automated emails saying you're over the space limit, then if not rectified ALL emails will be archived.
I think a member of PlusNet staff needs to look closely at your email setup, have a poke around and find out what's going on.
That's RPM to you!!
Message 2 of 7
(1,910 Views)
0 Thanks

Madasafish accounts have a hard quota that will bounce mail like the OP describes.
After deleting mail/emptying trash etc. try highlighting each folder in turn, clicking the cog lower-left and selecting 'compact'.

I wish I could speak to somebody about this issue, but 45 minutes is too long for me to wait on the phone at the moment. If I've time, I'll try the helpline over the weekend again.

I don't know if it's related, but I tried moving a few email into a different folder, by clicking the box next to them and then selecting the large cog and then move to. Even though the folder I wanted to move these email (all 2.5mb of them) was virtually empty, I got the message, ~ move failed, not enough disk space, or something similar.

I don't know whats going on, but I've received far more emails, in size today, than the size of those I deleted yesterday, which were causing emails to be rejected for me being over quota.

At the moment, I've about 4mb of emails in a single folder that I can see. I've compacted this as described, but I'm not sure what difference it makes.

Does anybody have any advice on the best time to try the helpline? I really don't want to hang on the phone for 45 minutes.

Moving messages to a different folder won't help because the contents of all folders count towards your quota. In fact moving them will initially make things worse because the original email - now flagged deleted - remains in place even though Webmail doesn't display it. If moves are attempted when your quota has already been reached this "worsening" behaviour will be what prevents messages being moved.

In fact it's possible that the quota might prevent you deleting messages because by default that means moving them to the Deleted Items folder triggering the "worsening" behaviour mentioned in the previous paragraph.

If this is the case a possible way round is to go into Settings then select Server Settings and the checkbox marked in the following image. 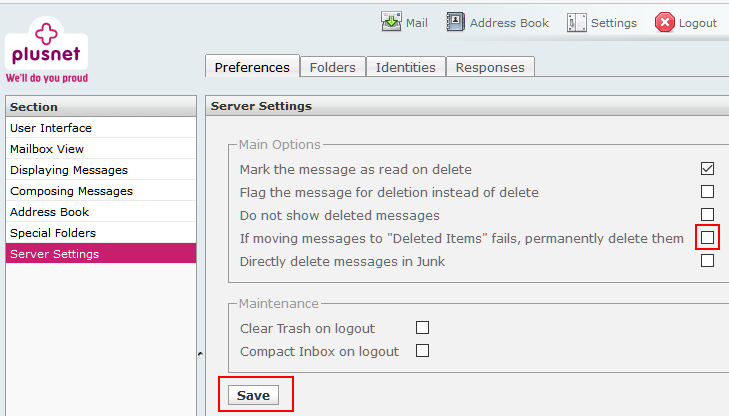 Now return to the Mail list and try deleting messages again. Immediately after deleting select the small cog at the bottom of the left hand panel and select Compact to recover the wasted (deleted email) space in the folder.

Select other folders and repeat to clear those. Also empty the Deleted Items (Trash) folder.

Hopefully this will reduce storage used to below your quota allowance.

If you don't mind me accessing your email account then I'm happy to take a look? You'd just need to drop me a private message to let me know what your email address is.