New to the community - well, I was a member as a consumer customer many, many years ago but this is the first time I've had an issue as a business cusotmer.

We've been experiencing intermittment speed/connectivity issues for a couple of weeks at least now. The line itself appears to remain connected (when I raised a speed fault ticket, the logs sent back showed the connection as being stable for close to 2 months prior to a couple of intentional disconnects as part of troubleshooting) however the speeds and ping times we're seeing are all over the place.

Seeing similar fluctuations when using an alternative PN Business router from our other premises and also with and without the faceplate in place. Different microfilters don't seem to make any difference either. The respone to the ticket suggested that speeds were well above the expected range - and I don't disagree, when they're good they're very good - but when it practically drops out for anything up to half an hour at a time it's causing a real issue, as it's been so slow we've been unable to process cad payments or even receive online orders in realtime.

Just looking for any other suggestions of things to try really - what could cause it to fluctuate so wildly? Just in the past hour we've seen a download speed swing of almost 6Mbps and a ping swing of close to 400ms.

Thanks for getting in touch @newtondeli and apologies for the delayed response.

I'm sorry to hear that you've been having issues with your speeds.

I've just picked your fault up and updated it with some actions I've taken.

Let us know if you're still having issues

You're right the connection itself doesn't seem to be dropping from what I can see on the router stats (it shows as being up for x days between us restarting it during troubleshooting etc.) but at times it grinds to a halt to the point of being unusable.

To give an example, it's actually just taken me 14 attempts to load the community page in order to respond to you (as each attempt timed out) and at the same time the guys in the shop were trying to accept a customers order via our Just Eat terminal which also repeatedly failed. 5 minutes later, we're seeing 'normal' speeds and can now even stream the radio again without buffering - it's very intermittment, absolutely great when it's working and absolutely unusable when it's not.

Do you have any idea of the time it can take for this to be actioned? Just so I know when to expect to see a difference.

I'm sorry to see the problems you've had. How has your connection been yesterday afternoon and this morning? The reset we've put through should've taken effect within an hour or so.

Let us know how you're getting on 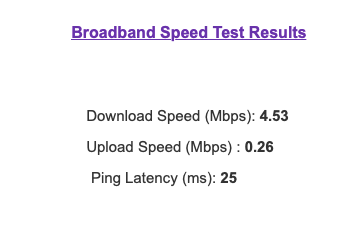 This is the best speedtest result I've managed to obtain in the past hour. 6 out of 10 attempts have timed out.

Thanks for getting back to us @newtondeli

I'm sorry to see you're still having problems.

Is your computer plugged into the router using an ethernet cable or connecting over WiFi? If your devices are wireless it may be worth carrying out the steps Here to try to improve the wireless signal.

Let us know how you get on

The speedtest result shared was from a hardwired connection, although we are seeing similar on wireless devices too.

Please see below this morning's speeds.

Sorry to see that your speed has dropped again. I've tested your line and the test is showing that there is still a high number of connection errors on your line but hasn't been able to pick up the cause of this from here.

As you've been through the troubleshooting checks and have ruled out any problems with your internal wiring/equipment, we'll need to arrange an engineer visit so that this can be investigated further. Please can you add your availability for an engineer visit to the ticket here? If you drop us another message on here once you've done this, we'll pick this back up and get your engineer appointment booked in for you.

Thanks @EmilyD , I've just updated the ticket with availability details.

Glad I'm not going mad and you guys are able to see the errors too!

Hopefully an engineer will be able to help get to the bottom of it. I'll keep you posted.

Thanks for getting back to us @newtondeli

I've just booked the engineer visit for this Monday Afternoon between 1pm and 6pm.

Let us know how it goes, hopefully they'll be able to find the cause for the issue!

Hi @Gandalf , just quickly following up on this - usually when we've had Openreach appointments for repairs/new lines etc. we've had confirmation from them on the day in the form of a SMS, but nothing this time, so just wanted to check whether we're still expecting somebody today?

Cool. Let me know how it goes

@Gandalf I've just replied on the ticket - he's replaced the master socket and a termination point too. His testing showed no issues and a strong sync at 13Mbps after that (he wasn't able to get anything before replacing them), and asked me to let you know what he'd done so you can do whatever is needed at your end.

Here's the current router stats and speedtest after he left. 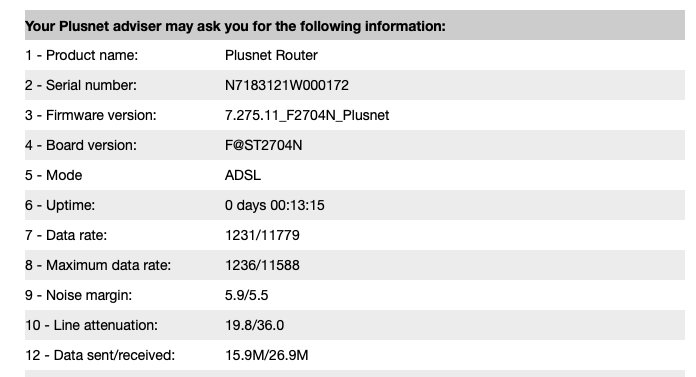