real world throughput at peak times/weekends on a 51.x.x.x connection

real world throughput at peak times/weekends on a 51.x.x.x connection

For the most part my adsl2+ service works as expected and has been very consistent. However of late, and by that I mean since I started seeing 51.x.x.x ip's showing on my router, there has been a noticeable drop off in real throughput particularly at weekends and some evenings. I've tested this and tested that over a period of several weeks trying to pin down if its anything at my end but so far everything checks out ok. My actual ADSL is very stable, and has a decent ip profile on the Btw Speedtest. Everything looks green and on the face of it my adsl service hasn't wavered much in a year.

My router has some crude graphs it can display and while I'm not convinced they are 100% accurate, they suggest when I have slow throughput I rarely get much above 5 mbps. The acceptable range of download speed on my line is 4-21mbps on the BTW speedtest.

Its almost a year since I have had this service and up until the 51.x.x.x ip's I've never experienced any throughput issues like this. I haven't reported this as a fault, none of the tests I can do find anything wrong with the line and I'd rather not waste my time or the help desk's time as I'm not sure they will find anything wrong if I have no evidence. At a guess, the symptoms suggest to me either some sort of rate limiting or a bottleneck/capacity issue at peak times which drop my throughput to strangely just above the acceptable downloads speeds on the BTW speedtest.

I'm hoping someone may recognise these symptoms and be able to suggest how I could gather throughput evidence before contacting the Helpdesk to raise a fault. 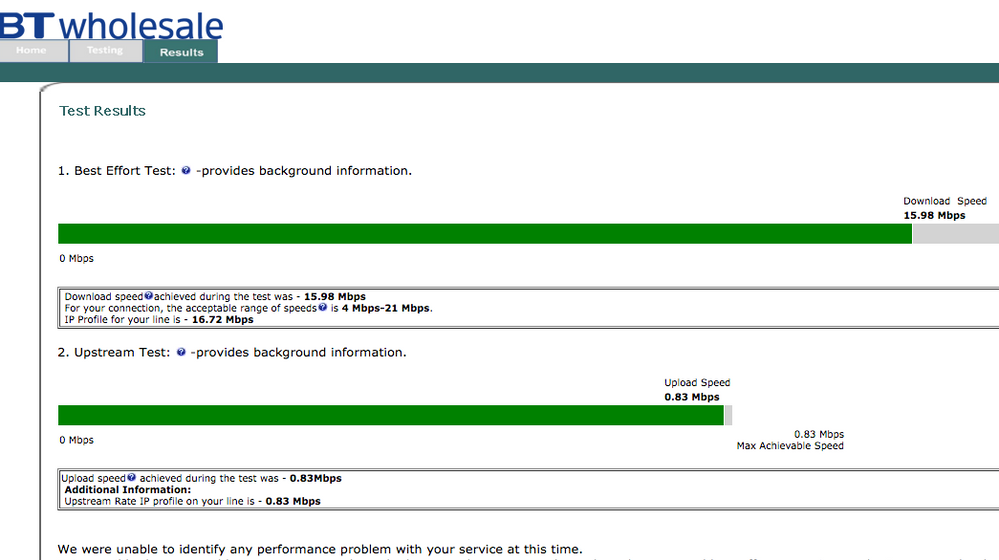 This is a difficult one because the general rule is if your line speed is in the estimate it's not always considered a fault and even though the speeds drop a lot at evening and weekend they don't fall out the speed range for your line which is anything below 4mbps.

In this case I would advise you run the BT performance test serveral times at day. Once in the morning, another in the middle of the day and again in the evenings when your speed drops, this will show plusnet your speeds are decreasing, and then give plusnet these results in a speed fault ticket and see what they say.

Thanks for the suggestion. I really only use the service in the evenings and at weekends and thats when the slow down has started becoming noticeable and troublesome. I also don't really have a reference from prior to the 51 network connections to compare, all I know is something appears to have changed recently and the service is not performing as well as it has done in the last year. That's despite all the speed tests etc showing ok for my line.

I'll persevere, compile some graphs and post back if anything comes of this issue.

I had a closer look at this issue over the last few days and after last weekend's grim slowness I realised that a windows pc was downloading updates at the time. A tv streaming service was also active at the time and was buffering which alerted me to something being amiss.

I can just about replicate the issue now and it appears to be traffic 'type' related. Tonight I set a download in progress from the apple dev site( an Xcode image around 4GB). The file download initially showed downloading at about 8Mbps but never increases or reaches anywhere near my ip profile despite no other traffic on my network. My last few BT wholesale speed tests were reaching 16+Mbps easily with no traffic on my service.

Curiously, if I then stream some TV and audio, and add a bit of general surfing this still works however the file download begins to suffer and the estimated download time increases dramatically. The bandwidth in use is still just over 8Mbps so there appears to be plenty reserve. While all this is going on, the ping latency to my gateway (London Colindale) was a blinding 17 msec  at best and at worst about 29 msec.

As the adsl line and network to Colindale seems not to be stressing, I can only presume that Plusnet may have some aggressive traffic management in place for file downloading. If there are TM's or similar devices policing my file downloads & updates, then I'm not really getting the benefit of a good adsl 2+ line with an equally good IP profile if the TM's are capping the traffic, and especially if my line could take a bit more. Hmm...would be good to hear from Plusnet if my unlimited service is now going via TM's

It may explain the noticeable change in throughput characteristics I have experienced recently.

Just thought i'd note that my service appears to have improved to a point where it is as good as it had been previously. I'm no longer connected to a 51.x.x.x ip. It still looks like a Colindale gateway but ip range is now 31.185.180.x. Whether thats significant I do not know, but i'm happy my service is working better. Fingers crossed it stays that way.

unfortunately the gremlins returned to my adsl service over last weekend. Netflix started buffering with no other traffic on the network and eventually my connection dropped. When it returned, a router check showed a ppp disconnect and to my surprise I was back on a 51.7.x.x IP. A btwholesale speedtest only managed 0.82Mbps. i rebooted my router and got another 51.7.x.x address.  A second speedtest returned 15Mbps but Netflix continued to buffer. Web browsing was painfully slow. Eventually the ppp connection broke again and I returned to a 31.180.x.x IP. After the second break service started to return. I also checked the service notices and there were no maintenance periods showing when this was happening ( between 7-9pm).  I am still seeing inconsistent throughput issues mainly when downloading files.

I saw a post from Chris( Staff) where he stated traffic management only prioritises certain traffic e.g. Skype traffic. That sort of suggests traffic types are only ever prioritised. Are some traffic types prioritised less than other types?

Would like to hear from anyone who pays an extra £5 for a priority connection( I saw this on the plusnet options) and what this actually does. It's something I might consider if it speeds up file downloads.

Thought i'd mention that I had opened a ticket to see if the Plusnet team could check out my unusual download issues, I followed the diagnostic tests and had three line resets by staff which caused the speed to initially drop, go back up then drop again. I also ended up back on a 51.7.x.x IP range. Unfortunately nothing useful came out of the investigation and after a few weeks I gave up as was being asked to follow the same tests each time a new advisor looked at my ticket. Since the network migration, the line has just not performed in the same way it did for the previous eleven months that I was a plusnet customer. I decided to call it a day and move on to another ISP. The good news is that the problems went away as soon as I moved from Plusnet. If I reflect on the main reason for leaving it would have to be the bumpy network migration earlier this year and the noticeable drop in performance on my former Plusnet Unlimited adsl service since the migration. I'm a bit disappointed with Plusnet as otherwise I had a good service. The ISP move has been justified in my opinion, as the problem has now gone. Fingers crossed it will stay that way.

If the service is not being provided as stated, did you have to pay out the remainder of your contract with Plusnet?

I am experiencing speed and drop out problems at certain hours and I'm considering another ISP, but don't know where I stand?

Yes, I decided to leave during term and accepted there will be a charge for that. My new ISP offered to re-imburse any contract-out charges up to a limit so I am sort of covered anyway and it made the decision a little easier.

I would advise you give Plusnet a fair chance to investigate your issue and open a ticket with them, it may be something they can fix for you and avoid you the hassle of changing ISP. Also, Plusnet customer services are best placed to advise you of your own contractual terms and what you might be liable for if you are thinking of leaving in contract.