I've noticed some pretty horrendous packet loss during some very discrete periods on one of my connections. These are the ping graphs from yesterday and today (today's losses currently ongoing). No notable loss before and no configuration changes.

Anyone else noticing any issues?

I think horrendous definitely applies to that sort of packet loss!

The first step we'd always look at is getting that connection into the test socket to see if it improves things, however, I can see multiple conversations prior to this one regarding the same or a similar issue and so you may have already done this. Can you confirm?

Those previous posts were when you were last migrating people between networks, I've left and rejoined Plusnet at this address since then. I assume that this is unrelated.

I posted to see if anyone else noted this on their connections or to find out if there was any known network maintenance that might affect the connection (South London). I noticed it and begun investigating as it kept causing an SSH connection to drop. I'm not seeing it on another Plusnet connection that I have (East Anglia).

There has been no notable packet loss in the preceding month, and the time, durations, and discrete nature look suspiciously like someone is tweaking some equipment somewhere -- and it's not me. I hope this might help you identify the issue.

I won't be at the affected address until the weekend, so I'm unable to try in the test socket at the minute -- but I will immediately do so if I see this when I'm there.

I've tested your line and we're not seeing any causes for this. Our tests are showing your router in sync at just over 13mbps with no congestion seen at the exchange and line stability showing as excellent.

Is your computer connecting over WiFi or direct to the router using an ethernet cable? If it's wireless are you able to try a wired connection to narrow down where the issue may lie?

If your connection is OK that way, then it's likely the issue lies with the wireless signal and I'd recommend trying the steps here: https://community.plus.net/t5/Plusnet-Blogs/How-to-boost-your-wi-fi/ba-p/1450193

If you're still seeing packet loss using a wired connection, do you see this across multiple devices?

Having said that I note you've indicated you've got more than one connection, could you PM me the username of the affected one so I can make sure I'm looking at the right account.

Thank you for looking into this. As you can see in the below graph, the packet loss appears to have stopped sharply again at 15:30. So I imagine you wouldn't see any issue on the test, even if there had been something.

This doesn't appear to be a WiFi issue as the ping is responded to directly by the wired modem. I'm not using the Plusnet provided equipment (but always crack it out for master socket tests when requested...)

The fact that is seems to have stopped so cleanly and at the same time two days running is suspicious, is it not?

Edit: PM'd as requested. Thanks again.

Thanks for the username via PM and the detail.

I've tested that line and the tests also aren't flagging any definitive problems. The router is in sync at 8.5mbps, no congestion seen and line stability showing as very good. 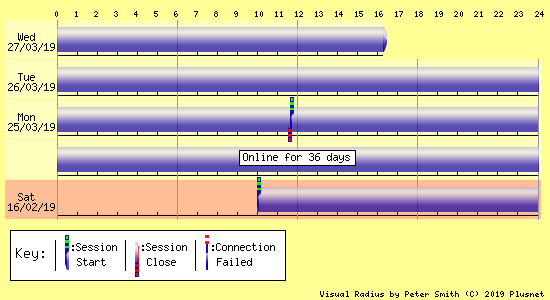 Having said that, there are occasional errored seconds (around 87) though I wouldn't expect this to be having much of a negative impact on the connection. At this point any fault report we raise with our suppliers would likely result in a request to arrange an engineer visit which comes with a call out charge if there's no fault found with the Openreach network, so I think it's probably best to do some more troubleshooting first.

Are you able to try the test socket as well as another router letting us know how it goes?

Well, based on the current pattern unless an Openreach engineer comes early-afternoon before 15:30 they won't spot anything even if it was a line fault. I'd wager that this is further up towards your end, rather than mine as we agree that the media of the connection is good to my modem yet packets are not getting to it...

As noted by @OskarPapa this is strangely reminiscent of packet loss that affected me (and many, many others) and was occurring when Plusnet were migrating customers from the old to the then (2016) new network -- though the exact packet loss pattern is quite different (that appeared to only be evident under evening load, and did not have this sharp start/stop).

It took quite some effort, and hundreds of customer complaints here, to get Plusnet to shift their focus from blaming individual routes/lines/customers to actually fix the issue at source. I think, honestly, you'd agree that this doesn't look like a typical degradation problem. I'm hoping this won't be the same uphill battle.

As I mentioned, I'm not at that location at the moment but should this reoccur into the weekend I will hook up the Plusnet equipment, verify, and update you. Thanks again for looking into it.

Like what happened in 2016, I'd expect we'd be seeing a lot more reports of this if the problem were to be related with our network, and at the moment there's nothing to really suggest definitively there is.

To try to rule that theory out, I've temporarily added a static IP on to the account. Once you reboot the router, the connection will be terminating on different equipment and tunneling via L2TP. Let us know how that goes please.

Other than that I'm afraid we do need to go down the troubleshooting process in order to try to identify and hopefully fix the problem. Also let us know when you've tried the test socket, a different router and a device via a wired connection.

Thank you for your efforts. I appreciate your points. I have reboot (IP now x.x.x.67), and keep an eye on this tomorrow to see if I get the same pattern or not.

As I mentioned, I am entirely willing to do equipment tests locally when I can, should the issue be evident at the time.

No problem, keep us posted on how things go.

The PPP session did drop at 03:53, and I've had much worse minimum ping time since then. Note that the L2TP tunnel you applied was also in effect from 17:25 and latency remained low until the session dropped overnight.

@Gandalf  Feel free to let me know any thoughts.

I'd like to try something else to see if this was related to the dynamic IP you had previously so I've removed the static IP. Can you disconnect the PPP session or switch the router off for 65 minutes posting up a fresh graph after a few hours?

This should force your connection to pick up another dynamic IP which hopefully you've not had recently though due to the way dynamic IPs are assigned nowadays they come from a really small pool which is based on your location.

I dropped the PPP session at 15:19 and it reconnected with IP x.x.x.179. This is in a different class A than both the static and the last "dynamic" IP (which it seems I probably had from at least early Feb).

Cool. Fingers crossed that fares better, let us know how it goes.

These are the graphs from Friday 28th. Again, no notable packet loss (hostnames covered).

Thanks for looking into this, I'll keep an eye on it but tentatively it does seem the packet loss might be resolved.

Do you have any idea why the latency profile might have changed (as highlighted by the think broadband graph, in message 11)? It seems the minimum has gone up 3-4x compare to what it was before I was experiencing the packet loss, however it also seems to be far more consistent (e.g. not as high as before during evening peak, clearly seen comparing the FireBrick graphs).