Overnight Noise according to SNRM

Overnight Noise according to SNRM

My SNRM is set to 6 (no complaints from me as the line is stable & speed OK), for the second night running I'm seeing the same pattern of noise, am curious if anyone has a similar experience ? 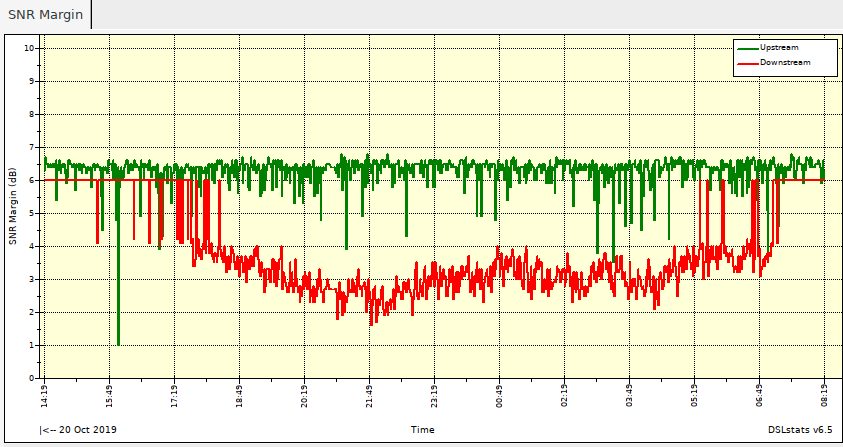 Do you have anything switched on over this period such as lights that are kept on all night? Does it coincide with local streetlights coming on? It's probably  a case of looking for things that happen either in your home or locally that are active during this period.

Have you tried removing the front off your BT master socket and plugging a filter directly in to the test socket to see if it's still present?

Have you tried doing a quiet line test with a wired phone whilst plugged in to the test socket when the noise is present? Do this directly without the filter and connection to the router. You test by ringing 17070 and selecting option 2. If there is noise then report a phone, not broadband fault.

A final note of warning. By disconnecting the ADSL connection during periods of high noise you could trigger the modem/dlm to resynchronise at a lower speed. So the choice of whether you try to trace this by disconneting when there is high noise levels is yours. It might be worth doing a speed test both when your line is quiet and when noisy to see if there is any difference due to there being a lot of error correction activity when the line is noisy.

My BT router decided to update its firmware whilst I tried to edit my last post and took until the edit time window closed until I could get back to it.. What I should have said is that reconnecting during a period of high noise could result in you resynchronising at a lower speed. So if you disconnect then I suggest that you leave it off until a quiet time the next day. Sorry for my brain lapse!

Thanks for the replies, I'll try the line test at some point. As my line speed stays solid, with no dropouts during the high noise, I'm going to leave things alone. I have a new type faceplate on my line with built in filters. It was more out of curiosity than anything else that prompted me to ask if anyone else has the same.

It could well be streetlights I suppose. There's nothing in my house that comes on & remains on over that time period. My line is very long  and is mostly unlit roads so if it is streetlights, they'll be in the town near to the first cabinet.

If you notice this happening to the point that it interrupts your DSL connection or hampers your usage, please let us know and we will see if there is anything obvious showing.

Annoyingly, this could be cause be a change/addition to something external to you premise which is a whole different kettle of fish.

Its a long time since I had ADSL, but when I did so and ran Routerstats regularly, I often saw similar effects. I always restarted the router when necessary at about 11:00am because that was the period of minimum noise.

I eventually discovered that it was probably long distance AM radio interference.

My SNR was always slightly lower at night, and on some nights it did what you see. The ADSL frequencies are in the AM band, and AM radio propagates by reflection from the ionosphere, which is much better at night. So during the night you get interference from distant AM stations which does not occur during daylight hours.

The amount of reflection and propagation depends on conditions in the upper atmosphere. It may be that conditions are "good" for long distance radio just at the moment, so you are getting a lot of interference.

On the other hand it could be something much closer to home - do you have a new neighbor who is a radio ham. They tend to be active at night because the propagation is so much better.

The SNRM line being completely flat when it's at 6dB looks a bit suspect. I think there are two possible explanations for a SNRM graph looking like that:

1. It's some sort of noise source switched on at night and off during the day. And your daytime SNRM is incredibly constant.

2. It's the normal increase in night time noise from increased AM radio propagation combined with your modem not properly updating the SNRM value during the day for whatever reason. I think this is more likely because it better explains both the increase in noise at night and the suspiciously flat line during the day.

I have seen the same sort of thing on my graphs. Something happens which lowers the SNRM, here at a little before 21:00. 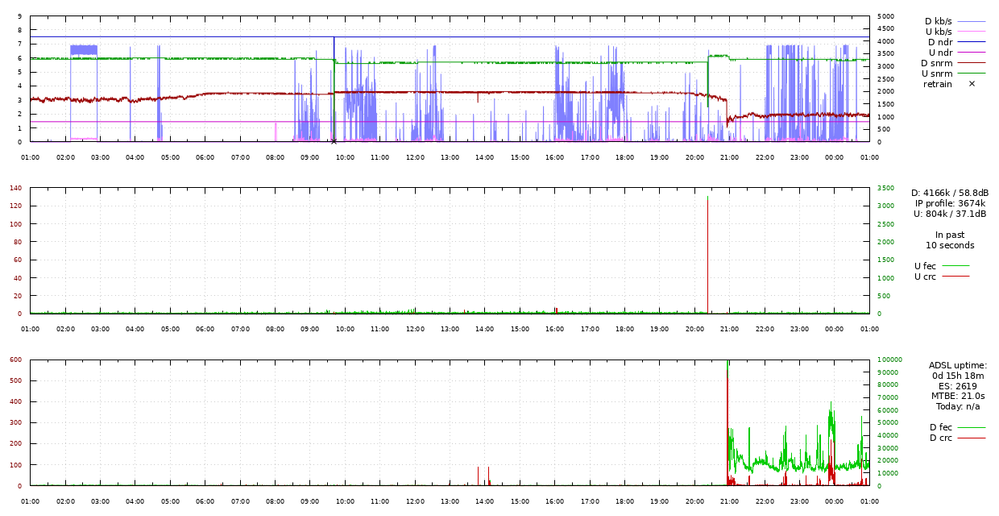 And then afterwards (the second graph covers the next day), the SNRM doesn't really update properly once it rises a little, it appears to flip between two values when it should really be changing gradually, and it oddly flatlines: 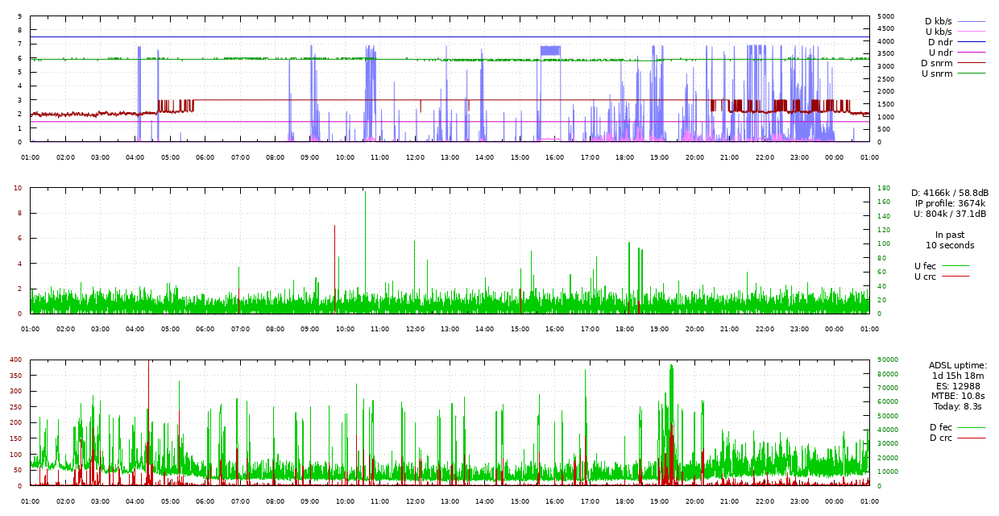 The odd flatline behaviour may stop by itself after a while or after a retrain (resync).

I think the flatlines may be due to the sample interval, but I'm also ready to believe it's the router / modem. I'm using a TT HG533 which apparently emulates the Broadcom adslcmd responses.

Having said that, last night's is different and has still not settled down so I doubt it's the street lights. I've just noticed that the SNRM has changed to 4, so maybe the change to the chart is down to the DLM in action. When I started with Plusnet at the end of Sept there was a problem on my line which was fixed by OR. The OR engineer said the line was unusually quiet, so the charts may be correct. My line speed has stayed constant throughout and the ADSL uptime is > 124 hours so I'm happy with the setting, just intrigued by the overnight noise.

Can someone help me with terminology? I see that the SNRM value is dynamic so it changes according to the level of noise, fair enough. But I also see requests to alter the SNRM, is that a threshold change? 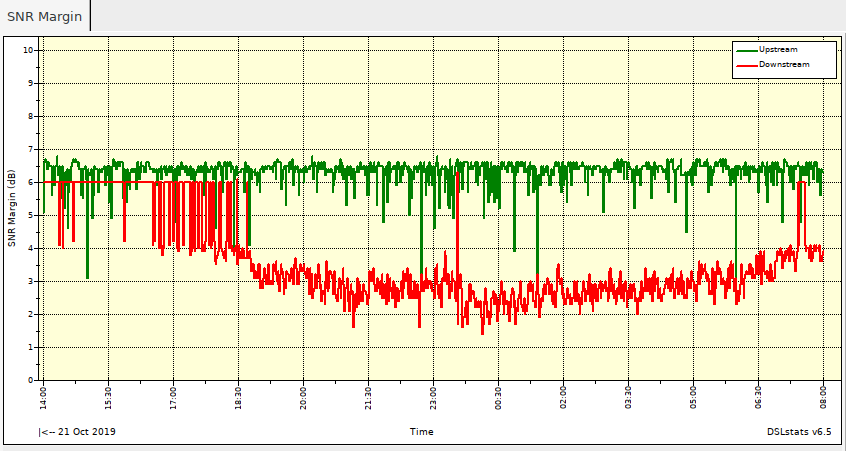 I ran out of time to edit my post, I found another thread that I think answers my question about terminology, not sure if / how to link individual posts so here's the thread link & a quote.

The OBSERVED SNRM is not constant, it is dynamic...

Thanks for getting back to us @cancunia,

I've just ran a couple of tests over the service and your SNR looked a little but too low for the errored seconds - I have now changed this to 9dB which should stabilise the line.

Please let us know how you get on.

I've been happy with it at 6db (assuming that's where it was). As mentioned above I was curious about the overnight errors, but quite happy with the line speed & stability. Looks like my ADSL re-synced about 50 mins ago so I'm guessing that was your change or maybe your tests, up til then it was up for approx 130 hours. If my line speed drops below where it's been for the past few days, I'll request that the Target is set back to the previous level.

Have you been looking at real world download speed as well as synch speed? @Mads is saying that you are getting a lot of errored seconds. This could mean that whilst your line may not be dropping there could be a lot of data having to be retransmitted and therefore your actual speed is dropping. In this case it could be that sending the data slower but only once is just as fast, or even better.

Yes, well, according to some people at Plusnet, any number of errored seconds is too many. You could probably have 1 ES per second without it significantly affecting your real world download speeds - you'd have to start looking at the amount of errors rather than the count of seconds with at least one error.

I got the impression from the first line of the first post that there was nothing here that needed fixing.