Internet down and no support from Plusnet

The screenshot i just ran was without the ethernet cable. And I very occasionally do the classic 'turn it off and on again' so it was a manual re-boot which i did.

My suggestion is: Run a speedtest from the same link with a wired connection - I have heard that the 2704n is carp for wireless range. Also avoid any further intentional router reboots - if not done correctly, they can upset the exchanges DLM and you could find it increasing the SNR and therefore reducing your connection speed.

Also, I am going to send you a PM shortly.

So my WiFi has been performing as it should for the past couple of weeks but it has now started to misbehave again.

I have done a line test and there's no problem.

I've given up on trying to contact PlusNet so i'm now left in the position to ask for further help on this forum before submitting a formal complaint and reporting to Oftel. 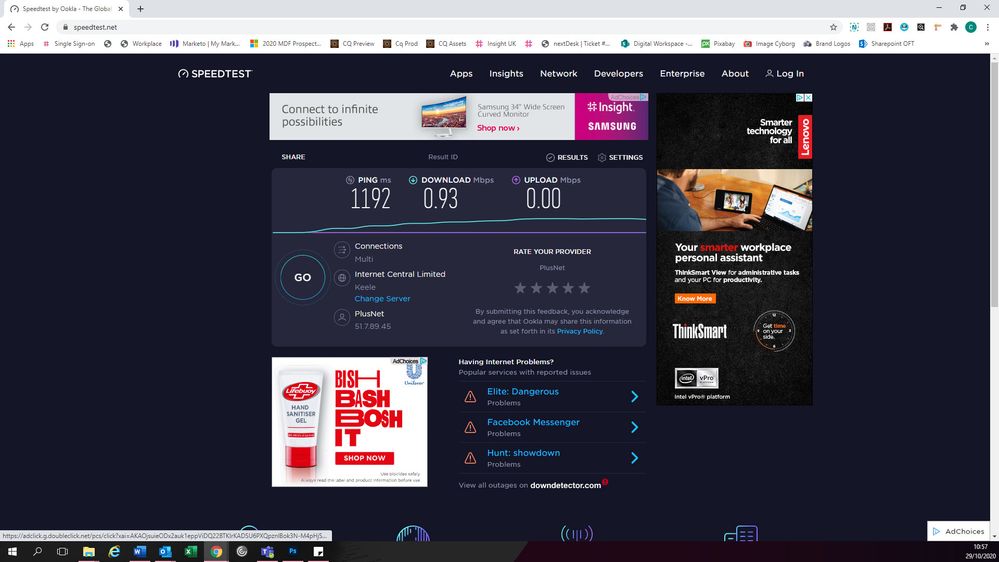 @MrGanteng As I have previously said to you (privately), the ping reading on that test is the problem. Why it occurs, I have no idea. Out of interest, were you doing anything out of the ordinary just prior to the drop?

There is little, if anything PN can do in these random situations - they don't do constant monitoring.

Nothing out of the ordinary, do you know what the best way would be to contact them without having to go through the tedious and lengthy process of the complaint procedure please?

This random high ping and resulting speed drop is something PN will be unable to help with, as I have said before.

There’s a lot of focus here in data speeds which are not overly helpful. DS SNRM is a bit high but DS sync is fast enough.

It took a long time to get a report on the QLT which makes me suspect it is being disregarded. Noise can be intermittent so a QLT shoujd be done frequently especially when performance is perceived to be poor.

Data spied tests are only meaning if one can be certain that no other devices are connected to the router and there is no other internet activity happening on the test platform which is connected via Ethernet with Wi-Fi turned off.

Just because there is a cable connected and you don’t believe anything else is happening does not mean that the connection is not over Wi-Fi and there’s no background activity.

Cloud uploading and update downloading running quietly in the background on PCs, phones, tablets, smart TV etc can have a marked impact on the activities you can see.

Is the router plugged into the test socket with the faceplate and all extension wiring removed?

When the speed drops (below 0.5mgb/s) I don't have any other devices using the broadband.

The router is plugged into the test socket with the faceplate and all extension wiring removed.

What is the real world issue you seek to address here?

These speed tests can be very un reliable.  I have just run the BT speed test from two laptops on my network - one over WiFi - the other over Ethernet (does not have working WiFi so I can be sure that there is no doubt about how connected).

The Ethernet connected device reported DS 41.91mbps US 6.37mbps ping anything between 51 and 275ms

Running the thinkbroadband.com speed test on the Ethernet connected device, I saw figures suggesting the DS was running at 75mbps sustained and 300+mbps burst mode ... over a 55mbps sync link!!!!!!!!!!!!

Focussing on data speed tests can only lead to insanity.  Your link reports the DS to be 15mbps - the SMRN is higher than ideal.  What are the operational issues you encounter?

@Gandalf  - any ideas as to why this user seems to be unable to fully access the user portal please?

The reason i'm testing my internet speed is because there are moments when it drops and i'm unable to open a basic web page or send a basic text email. I work in Digital Marketing so i'm fairly familiar with computers, being on one 40+ hrs a week.

We are sorry you were unable to raise a fault through your online account, we are aware of an ongoing issue highlighted here by Bob that could be causing the issue you are seeing.

I have raised this for you and we would need you to update the ticket here, so our faults team can progress this forward for you.

Sammy - thank you for catching this.

I can see a ticket has been raised and I'll be able to reply to this and schedule an engineer as soon as the issue with the online account is fixed.

I am a little surprised regarding the possibility of a £65 fee... this is slightly worrying as i have had a member of this forum come round and look at my WiFi before and he found no problem, the broadband speeds were fine. But a few hrs later it dropped again. Am i expected to risk £65 in order to get some standard customer support?

I know it sounds threating and scaremonging about a possible charge. All you need to do is to make sure there is nothing after the master socket that 'could' (I stress could I am by no means saying it is) be something like a dodgy phone, extension cable or something else, like a dodgy filter.

The wonderful world of technology, it'll work at some point then decides it doesn't want to anymore and it may not be obvious why.

So I would disconnect everything, just plug your router into the master socket, and even test socket if possible. See if there is any noise on the landline, so try either of those - 17070 option 2 quiet line line test. It has happened to my landline and to be honest if I didn't read posts on here I wouldn't have a clue what to do. Engineer came round and found the problem was in the drop wire outside (no charge).

I had a similar one, when I was moving out of my 2nd year house from Uni. Typical, whilst moving stuff all the electric went out. Great when you're trying to do something - "Oooh a power cut I thought". I walked outside and realised houses next door still had power (a bit of tip is when you can still see the lights are on).

Back in the day (cor I feel like Uncle Albert from Only Fools now). So 'during the war' I think I had just gotten one of my first mobiles. A brick. Rung energy company up and they said "If it is beyond the meter we'll charge, if it isn't we won't". Turned out the big fuse holder before the meter had disengrated, so no charge and not our fault. Fun and games trying to move out in the dark.

So a similar thing really, you just need to be certain you have done all the tests you can and be certain as much as possible it is not beyond the test and master socket.

@MrGanteng @Townman I was the 'visitor', and probably spent 1.1/2-2 hours checking all possibilities, to the best of my ability. Whilst there, I had my own laptop connected by ethernet - never touched wi-fi, and the connection was solid, with all my 'live' testing options working.

The connection then had a huge 'spike' in ping - as shown on the 'Speedtest' graph shown earlier, with a resulting massive drop in D/S and zero upload. IMHO, this is pointing to something external to the OP's environment being the cause, and I tend to share his concern that OR will find nothing - unless an event occurs whilst he is there.