Have had issues intermittently with the broadband connection dropping, but wouldn't be to noticeable on a day to day basis (restart the router and most of the time it would resolve), but over the last few days the problem has become increasingly worst.

At present I'm working from home (whilst unable to get into the office) and was kicked out of several Skype calls on Friday (14/09/18 ) due to my internet connection dropping.  Managed to get in touch with a plusnet agent via the online chat, who managed to identify an online fault, even before I managed to type an explanation of my issues.

Amazingly only 20 minutes later a BT OpenReach engineer was out and checking the line - and although he indicated the line test passed, it was just barely, so took the time to replace the socket inside, check and replace some of the cabling on the front of the house and check and make some changes at the local cabinets.  When he returned the signal had improved significantly, but warned that I could have issues for the next 24/48 hrs intermittently whilst test where being run etc.

However we are now onto day 4 (18/09/18 ) and I'm still getting regular drop outs (having been kicked out of 2 Skype calls yesterday).

Issue has just occurred again in the last couple of minutes and here is an extract from the router log;

Sorry to hear about the issues you've had.

Thanks Matt, since then we've had a 2nd BT OpenReach engineer out who detected and resolved more line issues (apparently some of the connections in the outside box had become corroded and was causing some noise on the line).

However I've had exactly the same issue again yesterday and today where the connection just drops (albeit that it does seem to be reconnecting quicker).

Could this actually be a router issue rather than on the line?  How do I go about getting a replacement router?

I have looked in to this and can see there were a few drops yesterday which is to be expected with this type of fault as it can take a few days to settle.

I can see there as been no drops since on our side and would advised to monitor over the weekend and should the drops continue, please get back to us here.

Thanks Sammy, it's certainly been better over this weekend - and checking the router logs, I can only see that the connection was dropped once since your e-mail and now at 01:04 this morning.  Obviously it had no real impact to us (at this time of night), but I'd like to understand if this is normal behavior and what causes it.  I don't understand what [User request] is causing the connection to terminate - is this a router issue?

Hi @Rathwill, having checked your connection over the last few days it is looking at lot more solid than it did at the start of last week still although there were 2 drops yesterday shown on the graph below: 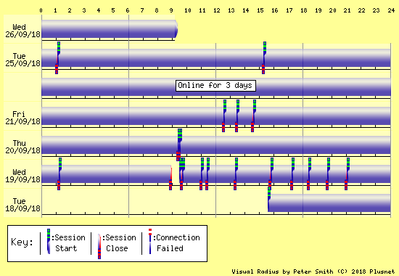 When looking into your connection further and as seen by the results below, the speed is certainly looking where it should be but the errors shown below on the results do raise concern that if what ever was causing the errors spiked up it could certainly be the cause behind the drops we've seen.

Although given how you mentioned you saw engineers investigating the line externally I am slightly leaning towards the cause of the errors being external however so we can progress this further if the drops start to pick up again I would like us to rule all internal aspects out that could be causing the drops.

Can you run through our troubleshooting guides here, let us know how you get on: http://goo.gl/p2tpvL
(By all means skip past any checks you may have already done)

The next thing would be to rule your internal wiring out by plugging the connection into your test socket which is under the face plate of your master socket and seeing if the drops stop. This rules out internal wiring, face plates and extension sockets as being the cause. How to locate the test socket and set your connection into it can be found here:

https://community.plus.net/t5/Library/Testing-From-The-Master-Socket/ba-p/1322242
(Given the recent frequency of the drops I'd advise remaining in this set-up for 24-72 hours)

I'm afraid I can't tell you what the drop means below or the cause behind this as it could be caused by several things.

The User request part could highlight that the drop is being caused by something closer to the router than it is from say the cabinet on wards.

Please let us know how the connection goes in the test socket as this will hopefully highlight if we need to take further action or not.

Thanks Ben, I'll give switching over to the master socket another go later today (and will post when done), but to confirm, before the initial OpenReach engineer was called out, I did take off the face plate and was using the master socket for a couple of days (and did still get issues, although admittedly I've not tried since).

In addition the first engineer switched over the 'box' to a two socket one (removing the need for the filter).  I'll make the change tonight after finishing work.