I have a fault lodged with BT since 28th April. An OR engineer attended next day (!!!) and confirmed fault in an overhead line.

Since then the estimated fix date from BT has moved steadily from 1st May to currently 21st May. Obviously they have never contacted me, I have had to check the status myself.

The issue with the line (from noisy to no dial tone at all) is obviously effecting my broadband connection (I also have an open ticket with PN to that effect) but PN I assume don't really care as it's BT's problem, BT don't care if it's affecting my broadband as they are only concerned with phone calls.

Is there any way to get PN to give BT a kick up the proverbial as this issue is directly effecting what they are charging me for?

Currently when it's up the connection speed is all over the place, and home working is very trying with 0.2mbs upload speed.

I did want to swap my line to PN so that it would all be in the same place for issues such as this, but that never happened.

I can't get through to BT or PN on the phone so am left having to do it via the flaky connection I would like fixed!! or paying extra for 4G data ...

Current speedtest is giving 1.3mbs down, and 0.3mbs up.

As Plusnet no longer allow you to take out a new contract without phone you will, or possibly already are, paying the full out of contract price for your broadband plus a surcharge for not having Plusnet's phone service. On top of this you are also paying BT for your phone.

I am pretty certain that if you were to place both services with either BT or Plusnet on a contract it would cost you quite a bit less than you're paying now for the two and you wouldn't have this hassle.

I see you have posted on the BT Retail forum as well (I am also a member), just to clarify how long have you had the seperate arrangement with BT billing your line rental (and I assume your calls) and PN billing the broadband?

A new PN contract for Fibre and phone would cost me almost exactly the same as I'm currently paying for them separately, as I'm on a legacy package for ADSL which costs me about a tenner a month.

I wanted to take out a new contract with phone but could not get a simple answer as to whether I would keep my webspace, domain hosting, email etc.. if I upgraded. Someone suggested that they had so I would probably ... but I wanted an assurance of this from Plusnet ... I never got it.

I also do wonder how fast they would react to a similar situation with my phone line. I was able to report the fault online via BT and have an engineer visit next day. Currently I get the impression it would take me longer than that to actually report a line fault to PN as they have closed down almost all their communications it seems.

Anyway thats all by-the-by, what I really want is my phone line sorted and my broadband to be stable and a usable speed.

Since forever. BT have always done my phones, and I've been with PlusNet (and F9 before that) for 19 years ...

Thanks for the clarification.  I have replied on the other Forum.

Out of curiousity have you checked online recently to confirm ADSL is still the only broadband service you can recieve?

I can get fibre to cabinet ... the cabinet is a couple of miles away though. I would upgrade to this as part of combining my phone line, but the speeds are likely to be quite slow still, and go down the same bit of wire that is currently causing the issue.

As it happens GigaClear have just spent the last few months digging up the lanes around here (they have laid a couple of miles of fibre cable in the time BT have not got my line sorted!) and I have a connection POT a foot away from my house. Probably no connections until much later this years though apparently, and their customer service (according to Trust Pilot) is abysmal (too) ...

If you can get FTTC perhaps you could (removing any personal info but leaving the exchange and cabinet number in, post a screen shot from: https://www.broadbandchecker.btwholesale.com/#/ADSL

Assuming you are using a PC/Laptop you click the icon to the right of the smilie face to upload a picture.

We can then see what speeds you could get.

I tried that button to insert an image, nothing happened. That was MS Edge, I'm now trying chrome 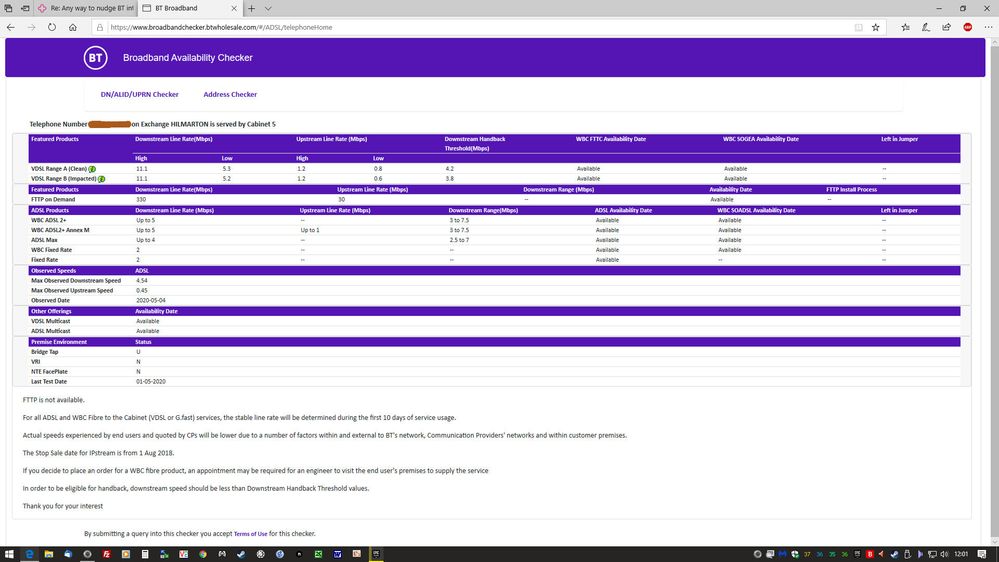 Interestingly your image would not enlarge when clicked in MS Edge either ... anyway there you go. Broadband is a lost cause round here.

how strange I always use Chrome.  I see what you mean about the FTTC speeds, they are about twice what you would get now - up to 5Mbps vs up to 11Mbps.

I have sent you a Private Message with some info in.

Click the icon next to your username and then look for private messages.

Thanks for getting in touch @geehawk I'm sorry for the issues with your connection.

If you upgrade to fibre broadband with us, you'll keep all your legacy extra's as that won't change. If you move your phone to us, you'll be provisioned on what's known as care level 1 with Openreach which means that the estimated response time for an engineer is within 3 working days that's the same as you're on now with your existing phone provider.

As you've witnessed, an engineer can get assigned next day or I've seen an engineer assigned in as little as an hour. It depends on the resourcing and availability of Openreach. There are higher priority care levels, we'd offer this in certain circumstances through our free priority fault repair phone service (We go into more detail Here).

You can also report a phone fault online through our phone troubleshooter and if our testing shows an external fault it'll automatically raise a fault to our suppliers and create a ticket for us to monitor and follow up.

Thanks for the comprehensive response. You appear to be the one who ends up sorting out queries round here.

I take it upgrading my account to fibre and swapping the phone to you, would be best done after BT sort out the line?

Also if I do it in the current Covid situation, is it likely to go through without a hitch, or delays?

I want to escalate the fault with BT, but unfortunately like Plusnet, the only recourse appears to be a community forum or a very long wait on the phone...

Thanks for getting back to me @geehawk We can transfer a phone line and upgrade you to fibre while the line's still in fault, and if the fault persists after, we'd be happy to investigate further and look at escalate where appropriate.

In theory there shouldn't be a delay to transfer a phone line from BT as these should be straight transfers (10 working days) with no engineering. Fibre orders may be delayed past the usual 5 working day time-frame though as that needs an engineer to go to the cabinet (the green box in the road) to swap your line onto the relevant fibre port.

Because as of the 3rd December last year we stopped accepting broadband only orders, you'd need to place an order to transfer your line to us and then fibre after (or both at the same time). If you prefer us to put the fibre upgrade through first, feel free to drop me a PM once you've placed the order and I'll be happy to arrange this.

I will have a think and get back to you. At least I now have it from the horses mouth that I can upgrade and not lose my old stuff.

No problem @geehawk I forgot to mention although I thought I mentioned it but it looks like I missed it through drafting my response yesterday. While you can place an order with us for both fibre and phone simultaneously, we have to put these orders through to our suppliers separately. Because of this if you prefer us to upgrade you to fibre first, drop me a PM.

Just thought I'd provide clarification in case it wasn't clear from my previous post.