We had an issue this morning with no broadband... spoke to the service desk (twice) and they tested the line, no faults, although the telephone line sounded horrrific. The first call reset the SNR from 3dB to 6dB. The second call simply confirmed the first.

It took about 7 hours but it now looks as though we have a stable connection again. Overnight will prove that I think.

However, we have gone from circa 17Mb down / 1.8Mb up to <2Mb down / <0.5 Mb up... which isn't worth a damn and won't run an instant message conversation, let along a voice or video conference, TV streaming or gaming.

Is there anything I can do to get back towards those heady heights of 17Mb?

@keithdwilliams  Welcome to the forum.

If you have a noisy or distorted phone then this is also the most probablr cause of your broadband problem.

You ideally need to report a phone not broadband fault. Run through the links in the phone troubleshooter and with a bit of luck it will automatically generate a fault ticket.  https://www.plus.net/help/phone/phone-line-troubleshooting/

@keithdwilliams Welcome to the forums. As I always ask when people quote figures as high as yours (17 & 1.8) , are you sure that you are on an ADSL and not FTTC connection?

The reaason for that is the limited support other Community members can offer on FTTC as  opposed to ADSL, and is different in both cases.

It is definitely a copper ADSL2+ connection to the house. The cabinet is Fibre enabled, but, we are ~1.5km from the cabinet.

The 17Mb figure may not be an 'official' speed although it did come from the BT wholesale speed checker.

If i'm entirely honest, 17Mb would be a dream, Ookla and other testers give 13-16Mb, which is absolutely fine. It's significantly better than 1.7Mb!!!

We went through similar issues when with BT Broadband before we moved to PlusNet. I went through a number of tests using BT Wholesale Speed checked and their ADSL checker. Ultimately it came down to the SNR on the line being too low, it was set at 1db, we tested it at 3dB then 6dB, but finally set it to 9dB and it sat there fore several years. No issues.

To be fair, we've been with PlusNet now for 3 years+, and had ZERO issues until this morning - so it may all reset and settle down to a usable speed again - and I have no idea what the SNR was set to yesterday. All I know is it was changed today amd we now have very poor speeds.

OK Keith. Just to be 100% sure - if you are able, can you post your xDSL stats from your router? If that is asking too much, can you post a picture/screenshot of your Member Centre homepage? - something is not adding up here.

Thanks for that - although it doesn't tell me much, other than (a) you have a very long line (b) your speeds are terrible - even for a long line and allowing for the rater low D/S SNR and (c) you've had a recent disconnection.

Which router are you using, as there should be a page giving slightly more useful information?

that's from a Netgear D7800. I have the PlusNet one too, but its stats page is worse - well i thought it was.

I can go back to it if that gives us more to work with?

No, please don't disturb your connection again - the way it's looking, your likely to lose any remaining speed. I don't know the D7800 at all, and have trouble with the PN one, too, as I have never used it. Is your PN router a 2704N or Hub1?

There must be more data available on the D7800? I know it's a pain, but if you can wait until early tomorrow morning, I'll fire up my other laptop with all my data files on it - in the middle of a Windows/Linux swap at the moment - and give you an idea of what the page I'm looking for resembles. Might be a bit different, but it will show you what we need.

I can wait, although im not sure my company will see it that way! i need to get this to a point where i can work and currently that's proving tricky.

I'll have a dig through only forums to see what stats options there are on this router - its incredibly capable, so it should be possible to find more details.

is there a router that is 'recommended'?

i wanted to put in a bridge modem, so i could use the AmplifiHD as the internal WiFi Router, but it only accepts PPPoE. Not PPPoA which this is currently using.

These are the current router settings:

If your PN router is a 2704N, that is only for ADSL, so I'm going to assume that is what you are on, despite some of your earlier comments suggesting you might be on FTTC.

I'm sorry, but like you, I'm only a customer and help out here when I can, but do have other things to do, so your employer will have to lump it.

As to 'another router', although that doesn't appear to be the problem, many users have found the BT HH6 a capable machine, but I wouldn't go down that route yet - the D7800 is even more capable.

I'm not a  modem/router expert, so that probably needs addressing on the 'My Router' board, when we have resolved your current connection issues.

BTW - those details don't help at all - sorry.

Hi John... sorry i did not mean to imply i expected you to fix this... any help at all is most welcome, but i need to get it to a working position. it's barely usable right now.

I also didnt mean to imply i had FTTC. I am connected to a fibre enabled exchange, i know this, but i am aware that the BT product we are consuming is the WBC ADSL2+ Annex M product, with ranges 11.5-18Mb down / 1Mb up, as shown here.

Didn't think they would... posted them so we could confirm i had the settings correct - given they've been in for nearly 3 years, I sort of hope they are!!

Thanks for you help so far... any light you can shed on anything, will be much appreciated.

OK - I understand your frustration Keith.

Your GIF image doesn't load (on this machine, anyway) - it is better to use ,jpg format, as you can embed those easily into your post.

Those settings look OK to me, and if they've been there three years they must be. 😉

Had a quick look at the manual for your router, and can't see an easy way to get the stats I really need, but I'm sure they must exist. Difficult to read a 280-page manual, though - much easier when you are sat in front of a machine connected to it.

I'll try and post a picture of the useful data early tomorrow morning - it is from my TG582N router, so may look different to the same data on your router, but gives you an idea of what you are looking for.

Morning, @keithdwilliams . As promised, an example of the kind of page/screen you are looking for: 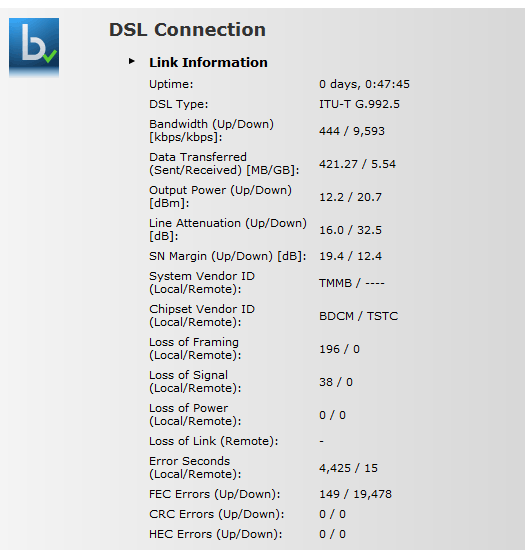 Morning John. I'm afraid i can't find any of those on a web page. I managed to telnet to the router last night and i think i could probably get them.

However, that router died last night. I'm having a lot of luck. So I am back on the PlusNet 2407N, Which I think can give us those stats...

However, I'm down totally - I have no xDSL connection at all - and it doesn't look like that telephone is working either, it's certainly very poor... so i am sitting in my car, tethered to my phone hoping to get a plusnet rep to help!